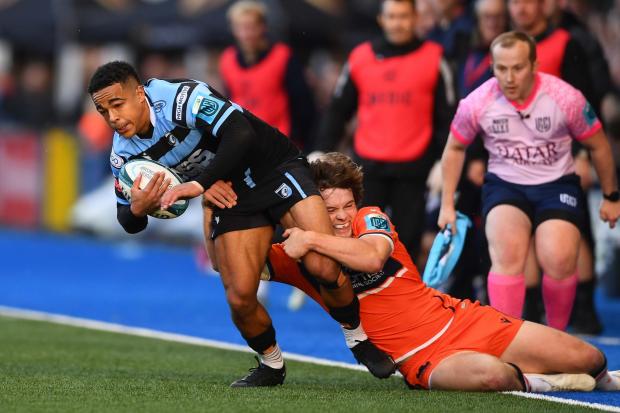 It was a tough one to watch on Sunday as Cardiff came away empty-handed from the last game in the first block of United Rugby Championship fixtures against Edinburgh at the Arms Park.

There was certainly an air of expectation around the ground on the back of three wins going into the encounter, but perhaps with a hint of realism as well around the fact that this may have been a false dawn. The Scarlets and the Dragons weren’t up to much as opposition, while the Stormers didn’t threaten to the extent their reputation suggested they would.

Ultimately Sunday’s game was probably a fair reflection of where this Blue and Blacks side is at the moment; a team that can threaten the top eight in the league, but generally will fall short in fundamental areas mostly around the mental side of a game, as much as the physical and tactical.

There was certainly a good list of aspects to like about the performance from Dai Young’s men. The driving maul went very well, particularly in the first half, while the defence was solid throughout. We also had moments where the attack looked at it’s incisive best, including a contender for moment of the season as Corey Domachowski attempted a chip-and-chase after a cutting line break.

Some of those positives were, unfortunately, curtailed by the refereeing. Now I didn’t want this blog series to be filled with whinging about the officiating, nor do I think the refereeing was the reason Cardiff lost on the day, but it would be churlish of me not to acknowledge what was a performance that lacked control and accuracy from Gianluca Gnecchi and his team.

That leads on to areas where the Blue and Blacks can improve though as, while the referee was acting erratically, the way to combat that is getting smarter particularly around the set piece and breakdown. Becoming squeaky clean discipline-wise should have been the message coming on from the coaches and from the leaders on-field, but the two penalties for pushing early at the defensive lineout suggested those messages were either not forthcoming or were being disregarded.

It points again to a lack of leadership on the field, particularly after Josh Turnbull departed with 15 minutes to go, while we also struggled without much of a tactical kicking game as Edinburgh kept us pinned back in our own territory for large parts of the second half as we chased a score to at least secure a bonus point in defeat.

The Scottish side were able to best us in those areas of leadership and game management because, while Cardiff’s team was packed full of exciting young Welsh talent, it lacked that experienced spine that the opposition had which is available for selection even when 15 or so players were involved in Gregor Townsend’s squad.

Finishing the game with the likes of Will Davies-King, Teddy Williams, Gwilym Bradley, Max Llewellyn, Mason Grady, Theo Cabango and Cameron Winnett on the pitch is great for the future, but they will naturally struggle when presented with Luan de Bruin and Boan Venter at prop with years of top level rugby in South Africa under their belts, Fijian international Bill Mata at number eight, prolific Super Rugby try scorer Wes Goosen on the wing, and Argentinian international Emiliano Boffelli at full-back.

It’s these sort of games where top eight spots are won and lost during the URC season, and Cardiff are at a natural disadvantage to a lot of other clubs in the league due to being hamstrung by Welsh rugby’s systematic need to promote as much young Welsh talent as possible while refusing to acknowledge what overseas players offer in competitive and development terms.

All-in-all it’s been a solid enough fixture block, with four wins from seven games, but the losses at home on the weekend and against Lions leave the Blue and Blacks with a tall order to make the top eight. There’s little-or-no margin for error for the rest of the campaign.

In the bigger picture though it’s been pleasing to see the improvements made week-on-week, particularly since the defeat to Lions and the subsequent off-field news story. The players are back to giving 100% week-in, week-out, and there are elements of our performances getting better all the time. It’ll be a slow process, but as long as that continues then the season can still be a successful one no matter what the final league table shows.