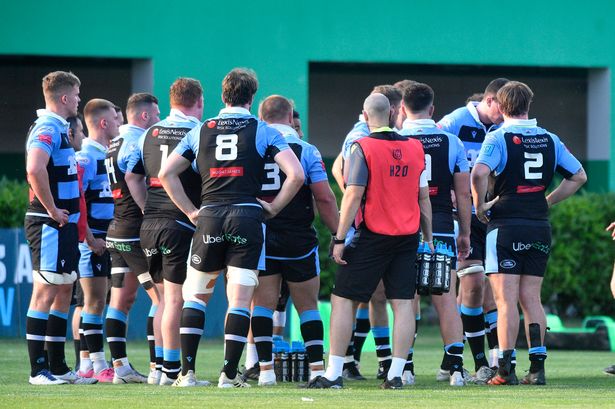 Cardiff’s 2021/22 season is one that will go down in the club’s history as one of, if not the most, bizarre. It is certainly one that players, staff and supporters alike hope is not repeated, for both on and off-field reasons.

It seems an unfeasibly long time ago that the campaign finally rolled around, but it did so with an air of cautious optimism, rather than the blind hope that can often accompany the Blue and Blacks getting underway again.

The much-maligned Rainbow Cup at the back end of the 2020/21 season had given the returning Director of Rugby Dai Young the opportunity to experiment with the wider squad at his disposal with a number of talented young professionals and Academy members putting in eye-catching performances, as well as established squad members looking comfortable in different positions.

That was assisted by some promising showings in pre-season as a fast and expansive style of attacking rugby saw us battle hard with English champions Harlequins at The Stoop before beating Bath at the Arms Park in a sign of what was to come for Stuart Hooper’s side when they headed back over the Severn Bridge.

Even when round one of the newly re-branded United Rugby Championship threatened to start with a disaster after both Jarrod Evans and Rhys Priestland picked up injuries inside the opening 20 minutes, there was plenty to enjoy about Lloyd Williams stepping in at fly-half and guiding Cardiff to a 33-21 win over Connacht.

However, with the beauty of hindsight comes evidence of what the rest of the season would entail as the Blue and Blacks enjoyed another four rounds of action where the furthest travel came in the form of a cruise down the M4 to Swansea.

A lack of a kicking game and general game management was obvious in tough weather away at Ospreys, before the first two of new South African opposition in the form of the Bulls and the Sharks put us to the sword with some brutal physicality. It was a win over the latter, but only just, as it was the following week in a Welsh derby against the Dragons without any internationals.

A new name for the competition, but the same scheduling issues!

It was at this point of the season that serious disaster struck though. 42 players and staff became stranded in South Africa as the omicron variant of covid hit and the UK closed it’s borders. The Welsh Government washed their hands of the situation and it became particularly complicated when some members of the party tested positive. It would be close to a month before all were home safely.

Out of adversity comes opportunity though, and while the majority of the first team players and coaches were stuck overseas or in quarantine hotels near London, a group of left behind internationals, fringe and Academy players, and semi-professionals donned the Cardiff jersey for the formidable tasks of facing Toulouse and Harlequins in the Heineken Champions Cup.

With the odds stacked firmly against them the Blue and Blacks battled admirably, even taking the lead against the French side after 20 minutes when Josh Adams cut through under the posts, while the game in London was still a one-score encounter with an hour gone. A hugely enjoyable and proud week for the club in the circumstances.

The covid impact continued into the new year with postponed games against Dragons and Scarlets over Christmas, a behind closed doors encounter with Harlequins and a cancelled game against Toulouse. When the team did take the field there were obvious fitness concerns as an 11 week lay-off before facing Edinburgh and a five-week lay-off before facing Ulster left legs looking heavy.

Some bright spots managed to appear with the last kick of the game win over Leinster and a solid second half win against Glasgow keeping Dai Young’s men in the hunt for the top eight, but ultimately the back end of the season was littered with poor, and at times seriously embarrassing, performances.

Nine losses in the last 12 games, an average of 39 points conceded per game, and a 69-21 loss away to Benetton in the final round of the season that was Cardiff’s heaviest loss in any competition since January 2003 were the headlines from a three-month spell that shouldn’t be written off as one to forget but written on the changing room wall to ensure it is never repeated again.

Ultimately a dreadful season on the field for the Blue and Blacks, with the off field disasters only going a small amount of the way to explaining that. A lack of physicality, missing leadership and a poor culture were all brought to the fore in the course of the that run to the end of the campaign, with the size of the task facing Dai Young in terms of turning this squad around spelled out in all caps.

Rays of sunshine are few and far between, with the overhaul of the playing and coaching group still 12 months away, meaning it could well be a long summer for supporters and a worrying 2022/23 season to come, but the good times will no doubt return thanks to the vision that Young has for the squad and the young players coming through. When they do return, they will be all the sweeter for the season that was.