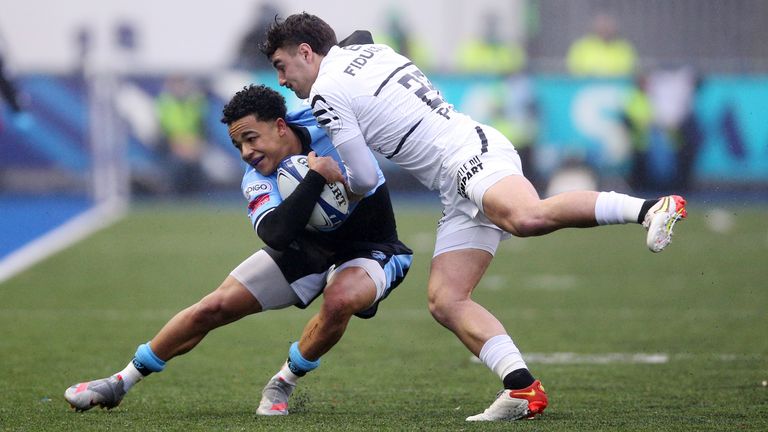 A mix-and-match Cardiff side battled bravely against reigning French and European champions Toulouse on Saturday at a packed and emotional Arms Park after a tough two weeks for the club.

With 32 players, as well as 16 coaches and staff, isolating at a Gatwick hotel having been caught up in South Africa being added to the UK’s red travel list, as well as nine being injured and a further one suspended, there was a mix of Welsh internationals, fringe first team players, academy members and semi-professionals taking the field in Blue and Black.

Up against a star-studded Toulouse side including the likes of Cyrill Baille, Antoine Dupont, Romain Ntamack and Maxime Medard it was always going to be tough ask, and despite some intense early defence and ambition to play at high tempo, Ntamack was able to give his side an early 0-6 lead thanks to a scrum penalty and being pinged for not rolling away.

However, after 20 minutes the unthinkable happened, beyond the dreams of many in attendance. Willis Halaholo nudged a clever kick through that forced Maxime Medard to conceded an attacking five-metre scrum, and after good carries from Halaholo and Alun Lawrence a stunning line from Josh Adams was found by Tomos Williams for a score under the posts converted by Jason Tovey.

Unfortunately the lead only lasted a few minutes as Antoine Dupont broke from the back of a scrum before finding Romain Ntamack on his shoulder who linked the attack to Anthony Jelonch to score, with Ntamack adding the extras.

There was definitely a chance for the floodgates to open on the back of that but Cardiff continued to not only stay in the game, but create attacking opportunities. A Tovey kick for Theo Cabango to chase was just too long while the away side were forced into a number of jackal turnovers just to stem the tide.

In the end their quality did show again just before half-time when Dupont was critical again, running a kick return 40 metres down the field with Sofiane Guitoune in support. The centre was dragged down short by the covering Dan Fish, but some big Toulouse forward carries get the momentum up and eventually Pita Ahki had space to shrug off a tackle and score.

Ntamack’s conversion made the score 7-20 at the break but that was a more than respectable position in a game many expected to be long gone by half-time.

The start of the second half saw some young and inexperienced legs begin to tire in the Cardiff ranks as the game opened up with some end-to-end rugby. The French side were still dominant, but some terrific turnovers from Ellis Jenkins and Olly Robinson kept them at bay.

There was even a chance to score as Jenkins intercepted a looping midfield pass but the Toulouse cover defence caught up with the openside flanker to pull him down just short of the line, before that man Dupont was on hand again with another mazy run ripping the Blue and Blacks defence to pieces with the scrum-half holding on to the ball to score a superb individual try.

Cardiff continued to attack with Dan Fish making a break down the left wing after an excellent Tomos Williams pass, Evan Yardley having a try ruled out for an infringement at the previous breakdown and then a Williams diving interception and offload released Tovey but Adams could not gather the final pass.

Unfortunately there was a sour note as the game entered the final stages when Jacob Beetham was shown a red card for a high tackle that was a touch unfortunate, but the young full-back still received a standing ovation as he left the field after an impressive debut.

Joe Tekori was in possession as Toulouse rumbled over for a final try with the conversion making the final score 7-39, but there was no shame for Cardiff’s thrown together 23 who battled admirably and showed moments of real class against the reigning French and European champions.