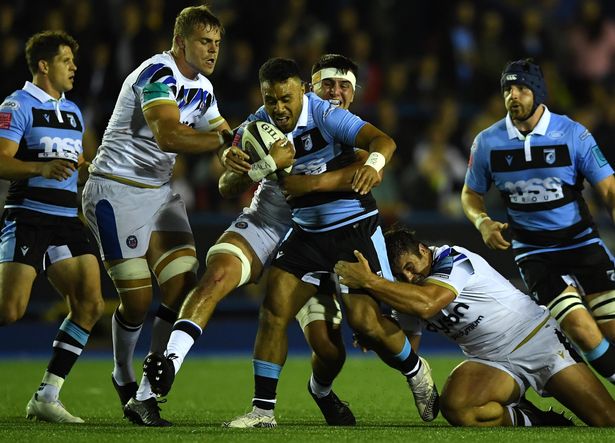 As we reach the midfield of the Team Report, for my money we’ve reached the most competitive area of the Cardiff squad heading into the 2021/22 season.

Particularly in the younger players who have now graduated the Academy and are pushing into the first team, there is a seriously high level of competition for minutes at centre, while they also need to displace two senior internationals currently occupying the 12 and 13 jerseys.

Willis Halaholo is of course one of those as the hot stepper returned from a tough time with a knee injury pre-pandemic and through rehabilitation during lockdown to play some excellent rugby last season, particularly developing his distribution and making a seamless step up to international level winning six caps as he showed the versatility to switch between inside and outside centre.

Joining him regularly in the Cardiff midfield over the last five years has been his mate Rey Lee-Lo who, I say as objectively as I can, has been one of the best centres in Europe over the last few years. Now 34-years-old he shows no sign of slowing down with an unbelievable ability to beat the first defender every time, alongside being a top quality defender himself, he is still playing at the highest level.

Pushing to become a staple member of the first team this season though is Ben Thomas, the 22-year-old who made his Wales debut over the summer. Having come through the development pathway as a fly-half he has played predominantly as an inside centre at senior level, acting as a second playmaker and kicking option, as well as being a carrying option.

The likelihood is that he will play most of his rugby at 12 this season, while acting as a backup 10, but what will be interesting is how much he plays at full-back with Matt Sherratt having run an attacking system based on dual playmakers during his first spell at the club. Thomas played full-back during the Rainbow Cup and looked comfortable, but with the 50/22 rule now it may count against his selection on a defensive basis.

In a similar situation Max Llewellyn is ready to play a leading role in the Cardiff centres this season having stepped up during the Rainbow Cup and pre-season after suffering an annoying set of injuries each time he had got first team minutes previously. A hard carrying inside centre who showed off an impressive turn of pace scoring against Ospreys at the end of last season, he could be a point of difference during the key middle part of the campaign.

With Thomas and Llewellyn just 22, it seems bizarre to say that Garyn Smith is then an experienced head in the Blue and Blacks midfield at 26, but with 104 appearances under his belt he has plenty to work with and on the basis of his showing against Harlequins in pre-season he has bounced back from torn ACL looking sharper in attack to match his defensive quality.

Then looking to make their mark this season on their way through the development pathway are two very exciting prospects in Mason Grady and Immanuel Feyi-Waboso.

The former has already caught the eye with a particularly strong showing against Munster on his first senior start earlier in the eye, showing off a frame belying his 19 years as he displayed a speed and strength that left even Springbok Damian De Allende in his dust. Unfortunately a knee injury suffered against Benetton next time out has kept him sidelined but there’s plenty of time for him to bounce back.

Then the latter has been largely kept under wraps as he finished his studies at Clifton College in Bristol last season, missing out on Wales U20 selection due to exams, but a debut came in the Rainbow Cup and was followed up by a pre-season appearance, with even those fleeting glimpses showing off an explosive pace and power.

It’s going to be a serious battle for those 12 and 13 jerseys this season, and I certainly don’t envy Dai Young having to make those decisions week-in, week-out, but with the hard carrying, stepping, pace, playmaking and footballing abilities all ticked off he certainly has a centre for every occasion in the squad.