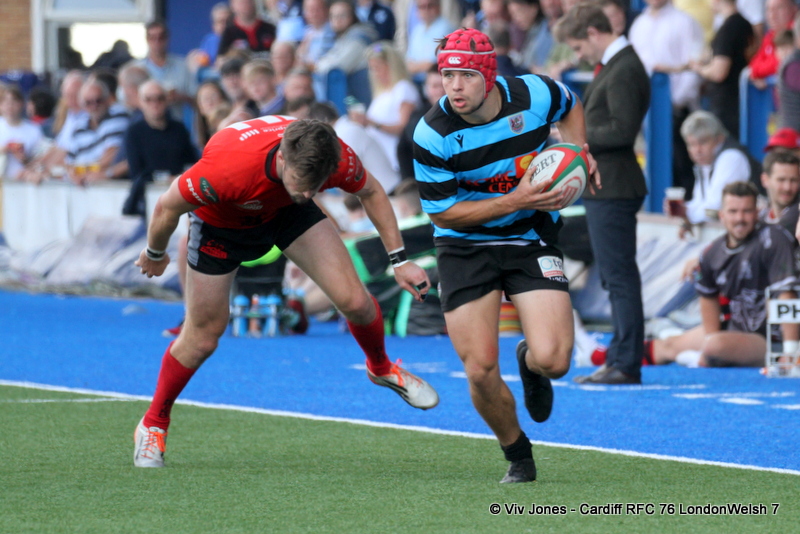 Cardiff RFC returned to action with a comprehensive 12-try victory over London Welsh in a pre-season friendly at the Arms Park on Saturday.

Head coach Steve Law named a good mix of senior semi-professional and Cardiff Academy talent, alongside taking a look at some permit players, for the visit of the English side for a fixture steeped in history as fans watched rugby at the old ground for the first time in 18 months.

The Blue and Blacks had the better of the early exchanges and moved out into a comfortable lead as Sean Moore ran a short line off scrum-half Liam Free to round off a red zone attack, before Jack Maynard’s chip kick off first phase ball was run on to by Ryan Edwards to go over.

Three tries in quick succession in the middle of the half effectively put the game to bed early on, as Jake Thomas sniped down the short side from a breakdown and got on the end of his own kick, then an Ethan Fackrell defensive rip allowed Cardiff to counter attack and Tom Hoppe broke away to score, before Hoppe turned provider with an outside break and pass for Thomas to grab a second.

There was just time for an all-Academy score going in at half-time as Ryan Wilkins made the initial break with Fackrell linking the play for Thomas to run in for a first half hat-trick. Four conversions from Maynard saw the score reach 38-0 as the sides headed for the sheds.

The Rags made a multitude of changes at half-time as Law gave a number of players game time, and it took some time to settle as London Welsh enjoyed a spell of possession in our half, with Cardiff ill-discipline leading to Theo Bevacqua eventually being shown a yellow card.

However, once the newly introduced players were up to speed the scoring resumed as Cameron Winnett won a turnover on the floor and fed Thomas for a fourth try, before Rory Bartle got in on the possession changes with an interception score inside the opposition 22.

The scores kept coming as James Beal made a sharp break off the inside shoulder of Maynard, and although he was dragged down short it was Winnett on hand to dive over, before Evan Lloyd carried hard through the initial defence and offloaded from the last man for Gareth Allen to score, and Maynard carried into contact himself to offload for Fackrell to get on the scoreboard.

London Welsh did get themselves on the board as a big driving maul took them over the line and referee Adam Jones signalled for a penalty try, with Bartle now sent to the sin bin, but there was still time for one more Rags try as James Beal went on a mazy run beating two men and exchanging passes with Dafydd Smith to score a final five points.

Four more Maynard conversions saw the final score reach 76-7, as the Blue and Blacks got a valuable opportunity to stretch the legs and shake off the rust against a Welsh side who were better structured and had a better set piece than the scoreline suggests.

Steve Law’s men now turn their attention to a second and final pre-season friendly away at Carmarthen on Saturday 11th September before the Indigo Group Premiership Cup gets underway at home to RGC the following week.