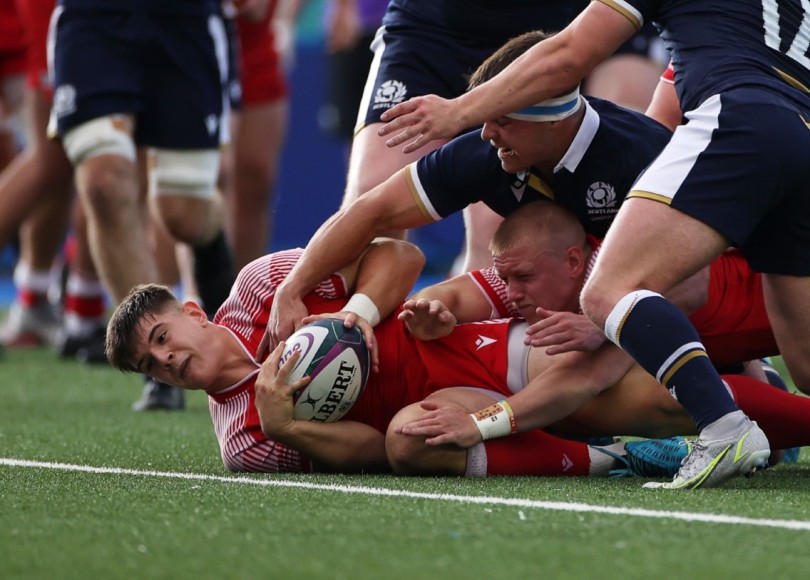 You only have to look at Warren Gatland’s trouble in nailing down a centre partnership for the British and Irish Lions to understand how rare top quality midfielders are in the modern game.

Of course some of the best players in Welsh rugby history have been centres, but you only have to look at how many games have featured Tom Shanklin, Jamie Roberts, Jonathan Davies and/or Hadleigh Parkes over the last 14 years or so, as well as the struggle to replace them, to get a grip on the problem we currently have in Wales.

Particularly at inside centre, trying to fill the gap left by Parkes requires a swiss army knife of a player who is a strong carrier, good footballer, defensive leader and a competent playmaker.

Not a lot to ask for then! However, over the past few weeks of the U20 Six Nations there has been a glimmer of hope that a player in that ilk is on the way through the development pathway in the form of Ospreys centre Joe Hawkins.

Carrying-wise, Hawkins showed off all the attributes required to be an effective ball carrier at inside centre during the U20 Six Nations, matching good footwork with a turn of pace and the strength both in the upper body and with the leg drive that gets over the gain line.

While many are fans of expansive and fast-flowing attacking running, it is difficult to envisage a time in rugby union where a crash ball centre won’t be a weapon, whether it’s getting over the gain line or running a decoy line to keep the defence narrow and open up space in the wider areas.

Listed at 6ft and 100kg as a just-turned 19-year-old, he’s not short of size and will only get bigger as he continues his development, but Hawkins is far from a one-trick pony in attack.

A secondary kicking option in midfield is becoming a key element for a lot of teams, and that importance will only get greater over the next few years as the 50/22 kick becomes law around the world. Having that ability to nudge the ball into the corner from second or third receiver as the defensive winger steps into the defensive line will be a required skill for many centres.

It’s again about creating space in the outside channels, but Hawkins can similarly evidence an eye for an attacking opportunity of his own and a skill level to take that opportunity, with the chip-and-chase against Scotland creating a line break from an almost nothing attacking phase.

That playmaking ability extends to ball-in-hand too, and occasionally is mixed well with the strength he shows in the carrying game.

The quality of the pass in the second clip is a perfect one for Carrick McDonough to score out wide against Ireland, but perhaps most impressive is the final clip against France where Hawkins steps in at first receiver and spots the opportunity to use his strength to get his hands through contact and send Oli Burrows towards the try line.

That decision making, as well as playmaking ability, is what can separate the promising from the talented, as placing the running of the attack on just the shoulders of the fly-half can lead to a predictable and formulaic attacking shape.

So with the attacking side of his game nailed down there’s just the defensive side of the game for Hawkins to show off, and with the strength of his carrying and his decision making with ball-in-hand, the transferrable skills are there to excel without the ball.

The way Wales U20 chose to defend during the U20 Six Nations was very turnover reliant, so Hawkins getting ball carriers to ground quickly for the likes of Harri Deaves to attack, or getting under the ball and holding the opposition carrier up are both key skills for an inside centre.

With seven U20 caps to his name, alongside 10 appearances for the Ospreys having made his first team debut last season, Hawkins is bang on the right trajectory to make it as a senior inside centre at club level and begin to push on for senior international honours.

Remarkably he is still eligible to play for the 20s again next season, and if he is selected should he not be playing week-in, week-out for the Ospreys by then, he will be a key figure in an exciting squad. No matter what next season holds though, the future is a bright one for Joe Hawkins.