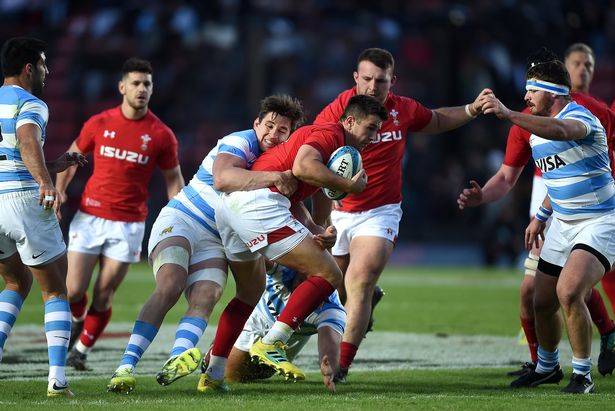 Things get serious for Wales in the summer international series this weekend as a fully loaded Argentina arrive in Cardiff for the first of two test matches.

Wayne Pivac’s men cruised past Canada last week with a 10-try victory last weekend to warm-up for this game, as Los Pumas arrive off the back of a Tri-Nations series before Christmas that saw them draw twice with Australia and record an historic win over New Zealand.

Wales will be buoyed though by an excellent recent record against Argentina in recent years, winning seven of the last eight encounters between the two teams, the latest coming in the summer of 2018 when the men in red recorded two summer wins on a tour of the Americas.

Los Pumas sole win in that time came in November 2012 thanks to tries from Gonzalo Camacho and Juan Imhoff, and they will look to repeat this as they prepare for a big few months of Rugby Championship action leading into the Autumn internationals.

That preparation started last week with a narrow 24-17 win over Romania last weekend, with only a late salvo securing the win, but head coach Mario Ledesma has made six changes to his starting XV as he looks to get the summer properly going.

Four of the changes come up front where Nahuel Tetaz Chaparro and Francisco Gómez Kodela form a new prop pairing, while Guido Petti starts at lock and Facundo Isa is in at blindside flanker. Both of the backs changes come in the back three where Santiago Carreras starts on the wing and Juan Cruz Mallia is named at full-back.

There are fewer changes for Wales as Wayne Pivac opts for just three alterations to the starting XV that beat Canada last week, with all three coming in the backs as the forward pack remains unchanged.

Kieran Hardy starts at scrum-half in place of Tomos Williams, Owen Lane is preferred to Tom Rogers on the wing while Hallam Amos replaces the injured Leigh Halfpenny at full-back as Jonah Holmes stays on the wing.

There is a return on the bench for Jarrod Evans after missing last week’s game with an ankle injury, as Ben Thomas drops out of the squad entirely.

It will be a step up for Wales this weekend after the comfortable win over a fairly poor Canada side this week as, make no mistake about it, this Argentina side is a very good one. The Romania result is no doubt an anomaly, and if anything makes them more dangerous as they look to bounce back with a strong performance.

Los Pumas will be immensely physical up front, and immensely skilful behind, but they can be combatted and Wales will no doubt have an eye on breakdown dominance and the aerial game in order to ensure possession and territory, before building on Pivac and Stephen Jones’ attacking game plan which started to take hold during the Six Nations.

With so many players either injured or away with the British and Irish Lions it will not be easy for the men in red, but there are great opportunities to impress here as the coaches no doubt continue to keep one eye on the increasingly closer 2023 Rugby World Cup.