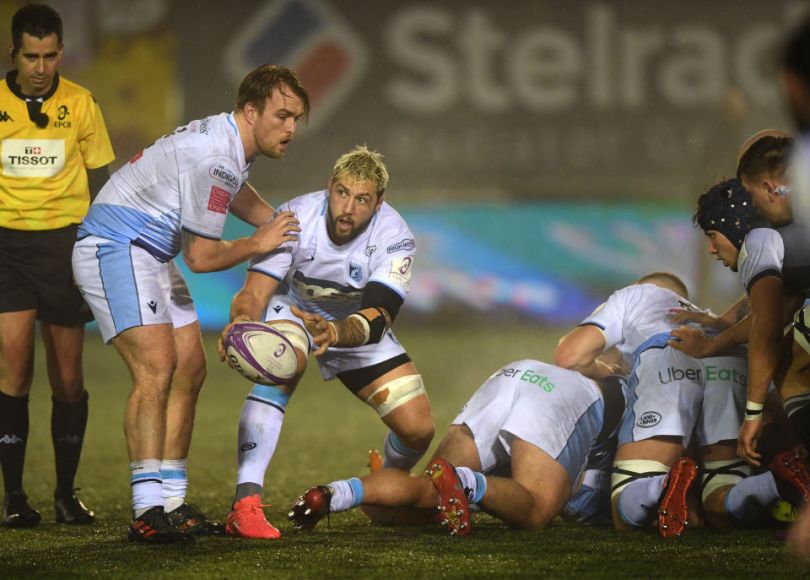 It’s that time of year again! After a season of watching from home the Cardiff Rugby Life Awards are back, so return to the comfort of your sofa and settle in to vehemently disagree with all of my decisions.

From a Cardiff point-of-view we’ve had an up-and-down season, with good results out of international windows and struggles during them, a change of coaching half way through, and even a change of branding announcement, but we’ve reached the conclusion so here are my awards for the bizarre year that was.

This award can sometimes be a touch condescending in a “you used to be rubbish, but now you’re not bad” sort of way, but the intention of handing this out in the Cardiff Rugby Life Awards is to acknowledge a player who has jumped from a fringe or talented young player to a serious first team contender.

Liam Belcher is certainly an option for this award, having gone from being released in the summer of 2017 to returning to the club for the Celtic Cup in 2018 and now being first choice hooker in the eyes of many. Seb Davies was also considered as he stepped up as a real leader in the pack, while Jarrod Evans’ improvements in kicking and game management also put him in contention.

However, the clear winner in my eyes is Corey Domachowski who has gone from an injury-hit bit-part player through the 2018/19 and 2019/20 campaigns, to the first choice loosehead at the Arms Park and very unlucky to miss out on this summer’s Wales squad.

Coming back from the lockdown period where rugby was suspended, the 24-year-old looked strong, quick and healthy, blowing away the Ospreys in that August fixture before started the first four games of the Pro14 campaign and hardly putting a foot wrong. A destructive scrummager, a high quality carrier and a brutally physical defender, he has become a cornerstone of a Cardiff pack that has seen big improvements.

Young Player of the Year

With the amount of international tests being played this year there has been plenty of opportunities for young players to step up, especially as John Mulvihill moved away from the older fringe members of the senior squad towards giving the next generation an opportunity during games in October and November.

The likes of Theo Bevacqua, Iestyn Harris, Gwilym Bradley, Alun Lawrence, Jamie Hill, Ellis Bevan and Mason Grady have all had opportunity to either make their debuts or get extended runs in the first team at one point or another, with all showcasing more than enough talent to mark them down as future stars of the Cardiff team.

There have been two standouts for me, one of which is James Botham as the flanker has stepped into the breach left by injuries to Ellis Jenkins and Josh Navidi in the first half of the season, and Shane Lewis-Hughes in the second half of the season, to provide a jackal, tackle and carrying presence across the back row and even make his mark in the international arena.

The winner though is Ben Thomas as the young back has coped impressively with a tough season at Cardiff where he has been called on to cover fly-half, inside centre and even been asked to play at full-back, before getting a run of games during the Rainbow Cup where his form earned him a call-up to the Wales summer squad.

We already knew about his playmaking ability, running quality and footballing prowess, but with the improvement in his decision making and slightly adding to his bulk to became a hard carrying and defensive option he has become a bona fide first choice option at 12 for his club, and potentially his country in the future.

In an up-and-down season there have still been a number of good Cardiff performances during the 2020/21 campaign, starting in round two of the Pro14 when we pretty much took apart Connacht in a 29-7 win at Rodney Parade.

Following on from that the maul dominance shown against Benetton when we beat them 22-5 back in November stood out during that long international window, while the back-to-back bonus point wins over Benetton and Edinburgh in the final two games of the Pro14 to secure Heineken Cup rugby were good performances and produced, crucially, under pressure.

However, my best performance of the season was against the Scarlets at the Cardiff City Stadium early in January. Now obviously it’s a win over the Scarlets, so it puts it in contention for this award along with our our two other victories over the Turks this season. That’s three in total, just to confirm. What sets it apart though was that it came at the end of the week John Mulvihill departed.

After a tough few weeks and the disappointing defeat at the hands of Ospreys on New Year’s Day, a change in coaching just added to the turmoil but the team came out firing and played some superb rugby, the Rey Lee-Lo try a particular highlight, before managing the final 20 minutes perfectly as the away side tried to mount a comeback.

Try of the Season

Without question the hardest award to find a winner for this year. All you have to do is watch this video from Andrew Forde compiling every Cardiff try this season, and you can see the incredible calibre of tries we have scored in 2020/21.

Hallam Amos’ first against Connacht, Aled Summerhill against Munster, Owen Lane against Benetton, Rey Lee-Lo against Edinburgh, Josh Adams against London Irish and Ellis Bevan against Ospreys could all have won the award in other years, but I’ve managed to whittle it down to one and it’s a special try.

From Josh Adams’ dummy line to Jarrod Evans’ line break, Tomos Williams’ offload and Rey Lee-Lo’s finish, it’s everything good about our back play in one snapshot. A stunning score well worth of being Cardiff’s try of the season.

Well, this is a bit awkward! Rhys Carre has certainly done a good job since his return from Saracens last summer, but by far and away the best of the two new signings made by Cardiff ahead of this season has been Cory Hill, the same man who has just asked to leave the club!

Nevertheless, his arrival saw a big improvement in the quality of our forward play when he was available, and it’s absolutely no coincidence that we won nine of the 11 games that he played this season.

Hill’s carrying in particular has been a real benefit for the team, with the angles he picks causing all sorts of problems for the opposition, while the fact he has arrived and quickly taken on a matchday captain role underlines his leadership credentials, especially at the lineout where his calling is second to none.

It will certainly be a big blow if he heads off to Japan this summer, but there are rumours that a Cardiff Rugby Life Award may have convinced him to stay.

The Special Recognition Award returns this year having been last handed out to Gethin Jenkins and Matthew Rees in 2019, with other recipients including Danny Wilson and Taufa’ao Filise, all of whom have left a superb legacy at the Arms Park.

This year’s recipient is someone who perhaps hasn’t had the same visibility as those in recent years, but his impact on the club has been greatly felt over nearly 20 years service given as a player and coach up to his departure this summer.

Robin Sowden-Taylor made his debut for the club as a player off the bench against Cross Keys in April 2001, and by the time he departed for the Dragons at the end of the 2009/10 campaign, the flanker had racked up 145 first team appearances alongside 16 games for the Rags, as well as spending the 2005/06 season as club captain.

At a time when Martyn Williams was at the peak of his powers that is some achievement to play that many games, as well as win eight Welsh caps and play a part in the 2005 Grand Slam to go with his 2008/09 Anglo-Welsh Cup and 2009/10 Amlin Challenge Cup winners medals.

After injury forced him to hang up his boots and a few years out of the game followed, Sowden-Taylor returned to the club in the summer of 2014 in the Strength and Conditioning department, eventually taking over as the head and masterminding the physical aspect of the club’s third trophy post-2003, as we lifted the Challenge Cup in Bilbao.

It’s an often forgotten about role in that success, but the S&C department got that squad in a place where we could go toe-to-toe with the likes of Pau and Gloucester despite giving up levels of physicality, while we also benefitted massively from suffering very few injuries in that second half of the season which was no doubt down in-part to the conditioning of the squad.

Robin Sowden-Taylor may not have ever been the big headline grabber throughout his career as a player and coach, but when it comes to Cardiff it is undeniable that our best days have come about off the back of his work both on and off the field. A true club legend.

Player of the Year

And now the big award of the blog! It’s been a good year for individual performances although some have been negatively impacted by international call-ups and injury when it comes to getting much game time in their club colours.

Players like Dillon Lewis, Kris Dacey, Cory Hill, Shane Lewis-Hughes, Ellis Jenkins, Jarrod Evans and Josh Adams were all superb but missed large chunks of the season either due to injury, the Autumn Nations Cup, Six Nations or a combination of the three.

In the end there were three main contenders. Corey Domachowski could have made it a Most Improved/Player of the Year double after a season in which he has made the loosehead position his own and pushed for international honours, while Rey Lee-Lo was once again superb in the midfield as a one-man attacking whirlwind and a defensive leader.

The winner though is a rule breaker. I once claimed that winning the Cardiff Rugby Life Player of the Year award was like refereeing the FA Cup Final, it only happens once. However, Josh Turnbull‘s performances this season have been simply impossible to ignore, winning him the un-prestigious honour for the second time having also won in 2017/18.

I don’t know if I have the words to sum up what he has offered the club on the pitch this season, but if there is anything that is a level above talismanic then he is it. Perhaps omnipresent does the trick!

In attack he has taken on the role as a primary ball carrier without any fuss at all, playing number eight on a number of occasions and hauling us over the gain line repeatedly. Then as the season has dragged on he’s shown he still has the athleticism to be a threat in the wider channels, leading to the setting up of Lloyd Williams’ try away at Munster in the Rainbow Cup after beating three defenders.

Defensively he has been a rock, at times single-handedly keeping us in games with sheer work rate and desire to stop opposing sides getting over the line. The turnover in the second half against the Dragons where he covers 50 yards across the field from a defensive scrum to a jackal on the opposite touchline sums up a season of performances that have been out of this world.

As young players have entered the first team set up at the Arms Park this season his leadership has been invaluable, and when you add all this up there is no other option for the non-existent trophy to go home with. A truly superb season from a truly special player, Josh Turnbull is the Cardiff Rugby Life Player of the Year for a second time.