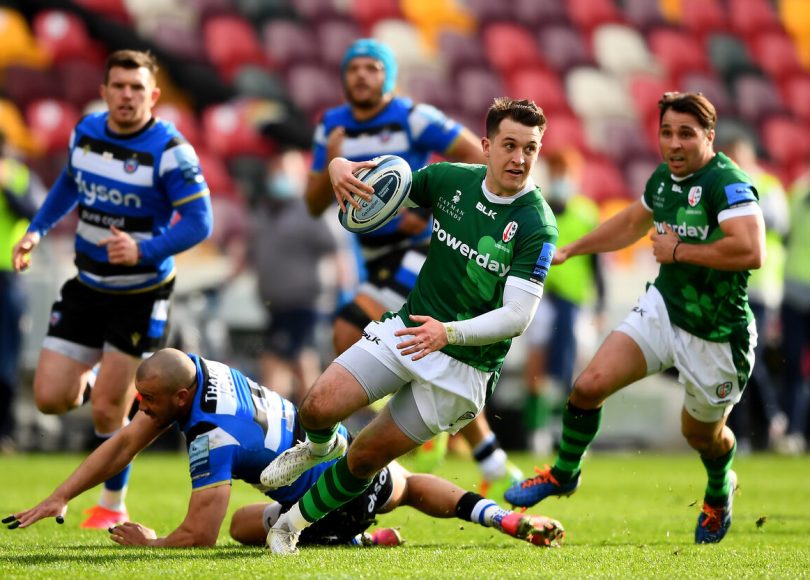 Cardiff Blues face London Irish in the European Challenge Cup round of 16 this evening, and ahead of the game I’ve had a look at how the Gallagher Premiership side have played in recent weeks.

Their form has largely been up-and-down all season, struggling to put together a consistent run of results, but picking up wins here and there that have allowed them to sit sixth with seven games left of the campaign, in a Heineken Champions Cup qualification spot and just five points off the play-offs.

They’ve win three and last two of their last five games, most recently overcoming Bath last weekend, with the stats showing that their defence is in the top six in the league, but their attack being the third worst so far.

Looking quickly at the way Irish attack there should not be a huge amount to worry Cardiff Blues’ excellent defence of this season, especially through phase play. A lot of their attempts to break the line come from trying to work around corners quickly and then relying on a moment of individual brilliance.

Paddy Jackson asks Lovejoy Chawatama to truck the ball up in midfield, and with Bath putting three defenders into the breakdown, Irish work around the corner to set up a 6-on-5 on the left. If Curtis Rona looks to either Tom Parton or Ollie Hassell-Collins outside them then it’s a 2-on-1 in the winger channel.

It’s a similar style to that which Edinburgh turned up with at the Arms Park two weeks ago, and that we struggled to deal with in the first half in terms of energy levels, but in a European knockout game with our internationals back then we should be at the level to match them in that sense.

Where we’ll be tested is how Irish try to create overloads on the short side, particularly on second phase ball, which will require all our concentration and communication to deal with.

The first thing to note is that Irish are not particularly expansive generally, but especially off first phase ball where they invariably run with a shortened lineout and ask one of their big ball carriers to carry hard down the 10 channel.

In both examples above they then immediately switch back to the short side, attempting to catch Bath napping either by facing up slowly after the set piece or going on auto-pilot and folding around to the open side without watching the opposition holding on the short side.

Irish then also run a pre-called play off nine, one of the few times they did that over the two games, but if the Cardiff defence can ensure that the numbers match up then overall there’s not a huge amount of the English side’s phase play attack that can cause problems.

Where they will cause problems is in unstructured play though, either on turnover ball or kick returns.

With a back three of Tom Parton, Ben Loader and Ollie Hassell-Collins while the back play might not be the most imaginative through phase play, London Irish have a serious amount of fire power on the counter attack, and as a team they work hard to get those danger men in space from turnover ball when they’re not making things happen themselves on kick returns.

On both occasions in the turnover clips they are immediately looking to get the ball wide as the midfielders drop to give the attacking line some depth, holding the inside defenders and protecting that space on the wing.

For Cardiff Blues the transition from attack to defence will be important, while in the kicking game looking to find touch will be key as our kick chase can, at times, be disjointed and the Irish back three will simply cut it to shreds. If we do kick in-field it has to be to compete, as they do have a slight weakness to expose there.

The biggest match-up this evening will undoubtedly be the Cardiff Blues attack v the London Irish defence though, a tactical battle between two units that on their day can win matches on their own, but each can be outplayed by a smart opposition.

There are two elements to our attack that we like to use fairly regularly which are a carrying starter play, whereby we play off 9 and put two or three forwards into contact, often to move in-field from the touchline and create some quick ball, as well as playing flat off 10 in an effort to get over the gain line easily.

Irish though come off the line quickly and in a very organised fashion, and if you give them any simple looks in attack within blitzing defence they will push you back all day.

Particularly against Worcester, who enjoyed 73% possession and 81% territory against London Irish, the Exiles set up the green wall and repelled anything the Warriors through at them as the opposition played too close to the gain line and were repeatedly driven back in contact.

Bath at times experienced that, and after consecutive phases of being put on the back foot by the Irish defence, end up kicking possession away cheaply.

There are two ways I’ve noticed that you can pick through the London Irish defence though, with the first of them being a shift of the ball at the point of contact.

It’s an element of our attacking game that we use on occasion to good effect, but can also lead to problems through isolated ball carriers and relies on a good skill level to handle the ball quickly in tight areas. We are capable of it without question, but it needs us to believe in our abilities and be prepared to overcome any lapses.

The second potential chink in the London Irish armour can be seen in part in the clips above, but is more effective when the ball is moved through the hands.

Creating depth in the attack nullifies the threat of their defensive blitz and causes them to sit on their heels a bit, giving a ball carrier the opportunity to hit a weak shoulder or work the ball into space that the defence might be slow to react too.

Of course some of our players work really well on the gain line, but if we give ourselves a yard and work towards that line, rather than starting there, it can open up a lot of potential weak spots to mainpulate, rather than running into a green wall and bouncing off it.

If we get the shape right, which we are more than capable of doing, then it comes down to decision making, and with the international quality in our back line we can go out at the Brentford Community Stadium this evening confident in our ability to score tries against a good defence.

Irish will scramble well, but if we are relentless in our attack and carry on being as organised and committed in defence as we have been all season then there isn’t anything they can offer us that we can’t beat.

It’ll be a fascinating battle, but above all else it’s a huge opportunity for Cardiff Blues to put on display everything that is good about this squad when we have a full set of players to choose from. This is our chance to shine. Come on Cardiff!