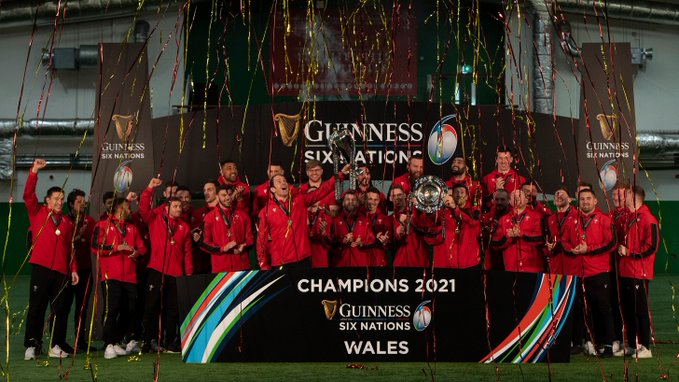 Wales are the 2021 Guinness Six Nations champions, and for all the suggestions of Jam Slams, asterisks and assistance from referees, Wayne Pivac’s men were the deserved winners come the end of the Championship.

Of course there were elements of luck along the way, and if I’m totally honest I’m still not clear on whether the laws state Louis Rees-Zammit did knock the ball on or not against England, but find me a Five/Six Nations win in history that didn’t include a favourable refereeing decision or a fortunate bounce of the ball.

Perhaps the annoyance is the assertion that Wales ONLY won due to refereeing decisions in particular, when in fact that could not be further from the truth.

Take the three red cards shown to Ireland, Scotland and France for instance, and although the latter was for a different offence to the former two, there is a common theme that all three came as Wales went hard at a defensive breakdown and were hit by an illegal ruck clean from the opposition.

It may look like three freak incidents as Peter O’Mahony and Zander Fagerson enter a breakdown with an illegally tucked arm and make direct contact with the head of Wyn Jones, while Paul Willemse makes illegal contact with the eye area of the Welsh loosehead prop, but looking at the statistics in comes from the pressure that we put on those contact areas.

No team in this year’s Six Nations made more tackles than Wales, with our 896 averaging 179 per game. Naturally that means that no side had more defensive breakdowns to compete at than the men in red. A noticeable difference in our defensive game under Gethin Jenkins during this Championship has been our willingness to challenge for the ball on the floor.

It hasn’t always been successful as, especially in the early part of the Championship without Josh Navidi fit, there was no real jackal threat throughout the Wales pack. Nevertheless, we still won more turnovers at the tackle than any other side with 15, and simply putting a man over the ball forces the opposition to commit another body to the breakdown which ultimately results in the three red cards.

On to the England game and yes there was an element of good fortune with the knock on call and the cross-field kick supposedly before the old rivals were ready, but even beyond those decisions Wales were very good and in the final 20 minutes showed the clinical edge that has been key to the attack throughout the Six Nations.

The basic stats paint a picture of an effective attack as no side scored more points (165) or more tries (20) than Wales did this Championship, but what is a really telling statistic is that the Stephen Jones guided offensive game scored 3.5 points per visit to the 22. Generally 2.5 points per visit is an aim so to take an extra point per visit across the five games is superb.

So with a solid and competitive defence, and a well-functioning and clinical attack, there’s no actual reason for anyone to question the Six Nations triumph of this Wales side.

Perhaps the real luck for Wayne Pivac was in the misfortune of certain players as injuries largely shaped his team selections early in the Championship and forced him to stumble on a balance that suited his side well. Could it be even better in certain areas? Yes, there’s no question in my mind.

This Six Nations is a great base to build forward on that front though, as some of the players towards the latter parts of their careers head off into a possible British and Irish Lions sunset, while the younger talents who played bit-parts over the last two months prepare to step up with an eye on the 2023 Rugby World Cup.

Overall, Wayne Pivac has led this Wales team from an uncertain 2020 into a clearer 2021. Exciting times are coming…