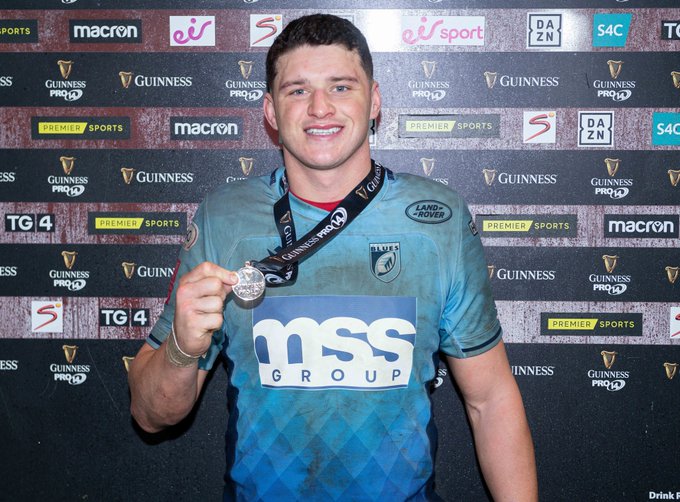 Cardiff Blues overcame Scarlets in Llanelli on Friday to keep the 2020/21 Guinness Pro14 campaign alive going into a break before the final fixture block of the season.

It’s the sixth season in a row that one side has done the double over the others, with the score in that respect now 3-3, and got the second Dai Young era off to an excellent start even if he did turn up too late to see Matthew Morgan’s try!

Nipping into the 100 Club

Matthew Morgan became the latest to make 100 appearances for the Cardiff Blues on Friday, taking the number of players currently in the first team squad to have reached triple figures of games for the club to an impressive 10.

It’s been a relatively quick journey to 100 for Nipper, averaging over 20 games per season for the four full seasons he’s been at the Arms Park so far, and one of those season’s wasn’t even completed. In that time he has scored 18 tries including some brilliant individual efforts such as that standout score against Saracens two years ago.

More than that though, he provides consistently good attacking threats without try scoring. Between 2017 and 2019 he carried for 2,367 metres at an average of seven metres per carry, with 31 line breaks, 100 defenders beaten and nine try assists. That’s x factor stuff, but produced on a consistent basis.

Defence is the victor

At times this season there have been occasions where Cardiff Blues’ defence stats have been very good, but they’ve been tainted by the fact that the reason has been we’ve spent a majority of a game on the back foot and the brave effort has been in vain.

However, against the Scarlets the defence won us the game as the home side came back into proceedings during the second half, enjoying 72% possession and 75% territory. The away side stood up to be counted and overall made 164 tackles at an 89% tackle success rate, restricting the opposition to just one try from a cross kick.

With the lineout also stealing Scarlets throws on four occasions, and a scrum being won against the head as well as two jackal turnovers, it was a close to complete performance from the Richard Hodges coached defence which still sits top of the table statistically in the Pro14.

There was disappointment in the week leading up to the game as Seb Davies and James Botham were both left out of the Wales squad for the 2021 Guinness Six Nations having been involved in, and looked good during, the Autumn Internationals.

With Wayne Pivac watching on at Parc y Scarlets both put on a reminder of their abilities, with Davies carrying seven times for 26 metres, as well as making nine tackles, in a physical showing in the second row.

Meanwhile James Botham won the man-of-the-match award with a stunning 25 tackles, missing none, and winning two turnovers as he dominated his Scarlets opposition for the second time in as many games.