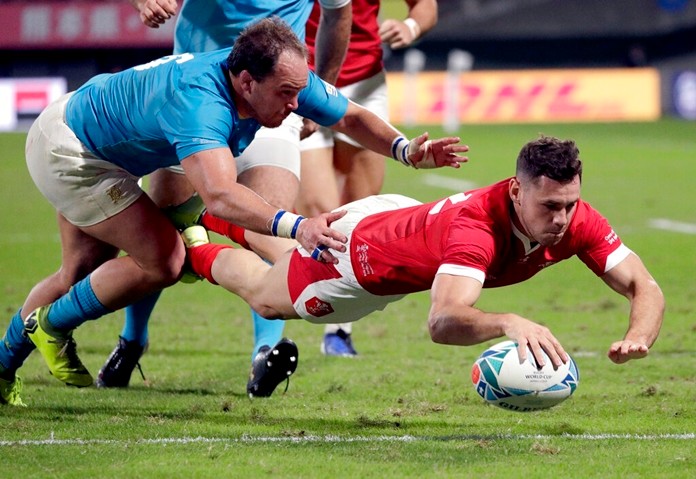 Wales head coach Wayne Pivac will name his squad for the 2021 Guinness Six Nations this week, with a number of Cardiff Blues players no doubt keeping a keen eye on proceedings.

It’s been a tough few weeks for some, off the back of a disappointing Autumn campaign before the cancellation of three European games, bad weather on Boxing Day and a poor performance on New Year’s Day, but with injuries and bad form impacting all of Welsh rugby there are certainly spots up for grabs.

Starting up front and there is a bit of a battle forming between Cardiff Blues loosehead props for a spot in the Wales squad as Corey Domachowski starts to put pressure on Rhys Carre for a go at the red number one jersey.

Carre was only sporadically involved in Wales’ matchday 23 during the Autumn and has only started one game for Cardiff Blues this season, while Domachowski has been the first choice starting loosehead whenever he’s been available since rugby returned after the lockdown.

Both are and will be excellent players, but right now Domachowski is the man in form with his strong scrummaging being matched by a powerful carrying game and being a jackal threat in defence. Carre, still only 22 of course, may well be better off being left with the club to start every game over the next two months at this stage of his career.

At tighthead prop then there is a question mark over Dillon Lewis’ involvement in the Wales squad for the Six Nations with tighthead currently a hotly contested position under Pivac. Tomas Francis, Samson Lee, Leon Brown and WillGriff John are all pushing to stake a claim for what is a maximum of four places in the squad.

While Dillon’s scrummaging is not as bad as some would have you believe, it is fair to say he’s not as strong at the set pieces as a Lee or a John. However, he is arguably the best tighthead around the field out of the aforementioned group, and that variety to his game should see him involved over the next two months.

In the second row there is almost certainly a spot for Cory Hill who will have an eye on a starting berth against Ireland in just over two weeks after strong showings against Dragons and Scarlets over the festive period, and with injury concerns for Alun Wyn Jones, Jake Ball and Will Rowlands going into the competition.

Meanwhile Seb Davies should be confident of a call-up, but Pivac’s reluctance to use a player who would seem to fit the style of play being developed more than any other lock in Wales during the Autumn was tough to fathom. If an expansive attacking game is the ultimate aim, Davies has to be selected and used in the matchday 23.

The back row sees only one definite selection from Cardiff Blues in my eyes, and that is Shane Lewis-Hughes. We know that Pivac admires a physical edge and defensive solidity in his blindside flanker, and while Dan Lydiate is in form at the Ospreys this season, Lewis-Hughes has been consistently high quality for two years now, offers an added threat at the lineout and, crucially, is a decade younger than Lydiate.

For Josh Navidi there continues to be concern over his recovery from a head injury suffered in pre-season training back in September. Possible returns to action have been suggested and pushed back over the last two months, and while he was set to play in European competition over these two weeks and could play against the Scarlets on Friday, there is no confirmation of his return to full health.

If Navidi is available then he is likely to get the nod, but if he’s not definitely available then he won’t be risked. That may well open up a space for James Botham to continue to be involved with the Wales squad having made his debut back in the Autumn.

Able to play right across the back row, a willing carrier, tackle machine and capable jackal, he will do the job that Navidi does for Pivac, and may well be called up even if his Cardiff Blues team-mate is available, although it will be a close call between him and Josh MacLeod at the Scarlets as the back up to Justin Tipuric.

Into the backs and at half-back it’s difficult to see a scenario whereby Tomos Williams and Jarrod Evans aren’t selected to go into battle for the red nine and ten jerseys, respectively.

Scrum-half has seen very little consistency under Pivac, with five players starting there during his short reign so far, but the time has come for someone to nail down that spot and it’s difficult to see that being anyone other than Tomos after a fine showing against the Scarlets that displayed everything good about his game; quality of pass, box kicking accuracy, speed of play, and the ability to dictate the tempo.

Although Lloyd Williams hardly put a foot wrong during his return to the international setup in Autumn, and may be get the call this week if Pivac wants to carry four scrum-halves, it would seem likely he’ll miss out to Gareth Davies and Rhys Webb this time.

At fly-half the competition for the 10 jersey is likely to be between Callum Sheedy and Dan Biggar, but Evans provided a timely reminder of his electric attacking capabilities against the Scarlets last time out and is approaching a point in his career where the only way we’re going to find out if he can make it at international level is if he gets a proper chance to play international rugby.

Moving into the centres and unfortunately this squad selection may well come two weeks too early for Willis Halaholo after his return from a minor knee surgery, but there’s no doubt that he would add to a Wales midfield that has failed to spark in recent times. His carrying ability is second-to-none, while his distribution and defence is always improving.

Jamie Roberts is in form at the Dragons, Johnny Williams is in favour at the Scarlets and Owen Watkin has been a consistent performer for Ospreys and Wales in recent years, while Nick Tompkins and Jon Davies can expect to be selected on reputation, but Halaholo will definitely be a cat among the pigeons when he is fit and firing.

A definite inclusion can be found in the back three though in Josh Adams, who returned to form for Cardiff Blues last time out and did enough to retain his position on the wing for Wales, with George North likely lining up on the opposite side.

Although the winger hasn’t been able to maintain his incredible scoring record in recent weeks, his defensive solidity, work off the ball and ability to beat a man one-on-one still makes him a shoe-in for the starting XV against Ireland.

There’s an outside chance he could be joined in the squad by Hallam Amos, who has enjoyed a solid run of form from the win over Newcastle until the Scarlets clash, playing at full-back and on the wing, and even being able to cover centre if required.

However, a competitive back three pool including the aforementioned North and Adams, as well as Leigh Halfpenny, Liam Williams, Johnny McNicholl, Ashton Hewitt, Louis Rees-Zammit, Ioan Lloyd and Matt Protheroe might mean Amos is just squeezed out when it comes to selection.