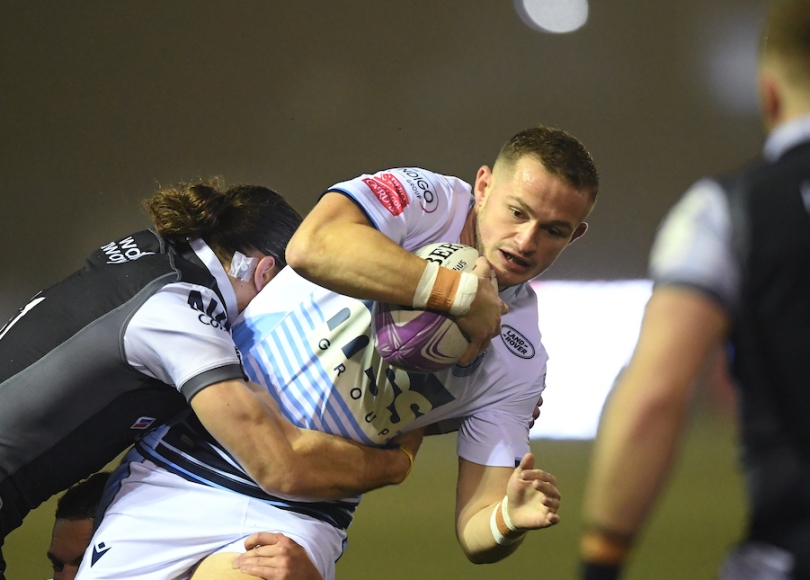 Cardiff Blues got the European Challenge Cup underway with a solid away win over Newcastle Falcons at Kingston Park on Friday night, overcoming a slow first half to get four points on the board.

John Mulvihill was able to welcome back Wales internationals Dillon Lewis, Seb Davies, Cory Hill and Shane Lewis-Hughes into his starting XV, but struck by late withdrawals as Owen Lane and Aled Summerhill were forced to miss out with Harri Millard and Matthew Morgan drafted in.

That didn’t seem to effect the away side early in the game though as Garyn Smith made a tackle breaking run to push Cardiff Blues into the opposition 22, went through multiple phases and won a penalty for offside which Jarrod Evans promptly put over the posts to open the scoring.

Newcastle did not hang about with their response though. The assistant referees were hot on offside as we were pinged in midfield and the home captain Joel Hodgson levelled the scores after just three minutes.

Despite that, Cardiff were still dominating the early exchanges, going through plenty of phases but struggling to break down a home defence that was blitzing with pace and intensity, and not shirking any one-on-one tackles.

In the end it took a piece of individual skill to break the deadlock as Garyn Smith scooped up a Jarrod Evans bounce back to break passed two defenders and with Sam Moore and Matthew Morgan on his shoulder the ball was shipped comfortably to Hallam Amos to score in the corner. Evans converted well from the touchline.

Unfortunately the away side were once again not able to hold on to the lead for long though, as a mis-read from Brad Thyer in midfield and a mis-read from Matthew Morgan in the back field allowed hooker Jamie Blamire to fly for 50 metres. He was hauled down by Jarrod Evans but winger George Wacokecoke was on hand to pick and drive over from close range, with Hodgson converting.

Cardiff returned to going through phases and tempted the hosts offside again, with Evans adding three more points after 25 minutes of play, but more disappointing play without the ball from John Mulvihill’s men cost them for a second time in the half.

First an un-wise quick lineout in our own 22 was poorly kicked clear by Tomos Williams, and when the kick chase was equally disappointing, Newcastle were able to return the ball incisively and scrum-half Sam Stuart was on hand to run a second try of the game in for the Falcons, with Hodgson converting again.

With Cardiff struggling to combat the home side’s defensive urgency and physicality, the rest of the half seemed to pass by like a damp squib, as the English team took a 17-13 lead into the sheds at the break.

There was more Cardiff Blues attacking to get the second half underway, this time with an added edge as Harri Millard and Hallam Amos were put into space on their respective wings to get over the gain line, before Newcastle were offside once again and Jarrod Evans cut the deficit.

The lead came about with another brilliant piece of individual play though, as Amos put in a high kick which he chased down and took superbly before producing an ever better moment of skill to offload for Tomos Williams who ran under the posts, with Evans adding the extras.

With Newcastle offside again, Evans extended the lead to 17-26 within 15 minutes of the second half getting underway, and as the weather got worse at Kingston Park and both sides turned to the replacements bench the game got bogged down as it entered the final quarter.

There were opportunities for the home side to get back into the game, but some solid Cardiff defence and a dominant set piece kept them at bay, with Seb Davies in particular leading the effort to hold on to the lead and Evans along with the back three kicking well to ensure we avoided being pinned in our own half.

Newcastle cut the lead when Gwilym Bradley was pinged for a high tackle, but with two minutes to go the game was made safe as a strong driving lineout headed towards the try line only for it to be pulled down. Referee Ludovic Cayre went under the posts and yellow carded Mark Wilson, making the score 20-33 as the final whistle was blown.

With a raft of first choice players either rested or injured, and up against a Falcons side that largely had not played competitively for a number of months and came flying out of the blocks, it was a good way to start the European campaign away from home in tough Tyneside weather.

The first half contained some structural issues in attack and some uncharacteristic defensive issues, but half-time tinkering and more match fitness in the legs meant Cardiff were able to dominate the key part of the game early in the second half and come away with a good victory to get the fixture block underway, heading into a home game against Stade Francais next week.