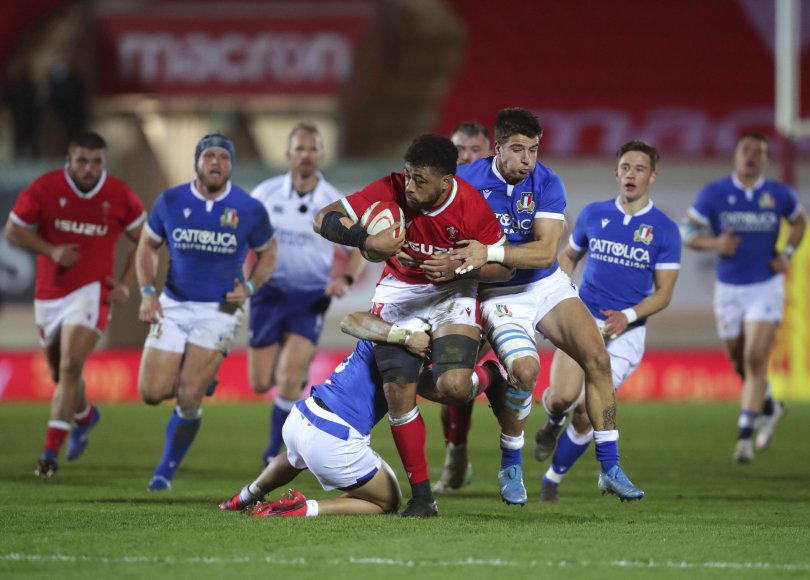 Wales finished the Autumn Nations Cup on a positive note with a fifth place finish and a comfortable win over Italy at Parc y Scarlets on Saturday evening.

Wayne Pivac had opted to ring the changes for the final game of the lengthy autumn internationals, with nine new faces coming in to the side that lost to England the previous week, despite the head coach’s initial suggestion that the team wouldn’t look much different.

Some newer faces in Nicky Smith, Sam Parry, Will Rowlands, Kieran Hardy and Callum Sheedy came in, while some more familiar faces in Tomas Francis, George North and Liam Williams were recalled, and there was a late call-up for Jon Davies after Johnny Williams withdraw with a calf problem.

It was perhaps the most recognisable face of all the changes that got Wales properly going though as Justin Tipuric, fit again after the head knock sustained against Georgia, flew through a gap off the shoulder of Taulupe Faletau after six minutes, dummied passed the full-back and put Kieran Hardy over for the scrum-half’s first international try and the opening try of the game. Callum Sheedy added the extras.

Despite the fast start there were still issues with the home side’s game though, as the lineout and defensive breakdown conceded turnovers and penalties, preventing the men in red from pressing home the early advantage, until the halfway point of the first half saw Josh Adams produce a fine pass to release Louis Rees-Zammit and Liam Williams down the left wing.

After being dragged down short, Wales’ forwards set about laying siege to the opposition try line, with Faletau going close before Sam Parry was able to push over from close range. Sheedy converted for a 14-0 lead.

Over the next 20 minutes Italy worked their way back into proceedings though, as Welsh indiscipline contributed to their own downfall. First, Sheedy not rolling away at the breakdown allowed Paolo Garbisi to get his side on the board off the tee, and then George North not releasing the tackled player allowed the Italian fly-half to kick to the corner.

A strong Italy driving maul moved in-field enough to split the Wales defence, and Carlo Canna produced a perfectly weighted kick in behind for Marco Zanon to run on to and score, with Garbisi adding the extras.

Referee Wayne Barnes was again on the whistle just before half-time when Josh Adams killed the ball after a Stephen Varney break away, with the winger sent for a 10-minute sit down, and Garbisi made the score 14-13 at the break with Italy having all the momentum.

Wales managed to briefly stem the Azzurri wave early in the second half when a big George North carry saw the away side go off their feet at the ruck, Sheedy putting three more on the board, but Italy got back into their rhythm before the Adams sin bin was up, moving the 14-man home defence around comfortably before Johan Meyer broke down the left to beat Louis Rees-Zammit and Ioan Lloyd to score in the corner.

Fortunately, after taking some time to re-group with 15 men back on the field, Wales were able to find their feet properly in the final quarter and ran away with the game, starting with another Taulupe Faletau and Justin Tipuric inspired try as the latter released the former on this occasion before Gareth Davies was on hand to run the try in.

Then an even more typical try from a Wayne Pivac side as Elliot Dee and Cory Hill combined to turn Italy over in their own half before the ball was shipped quickly out to the right wing. Jonah Holmes went close but North was on hand to burrow over from close range on the next phase.

There was just time for a fifth Wales time in the dying minutes, as a wonderfully delayed pass from Callum Sheedy released that man Faletau again, and he found his trusted back row partner Tipuric on his shoulder to score a fine try.

Sheedy converted all three to bring his tally to 13 points on the day, five from five off the tee, putting to bed some questions about his goal kicking and the required presence of Dan Biggar or Leigh Halfpenny if he is picked at fly-half.

In the end a comfortable win for Wales, ending the year as it started with a hammering of Italy. Another step forward from the Georgia game where flashes of the attacking intent were shown, but Wayne Pivac can only have himself to blame for an overall disappointing autumn series. Pick the players that suit his game plan and performances are promising, pick the same old faces and we will go nowhere.