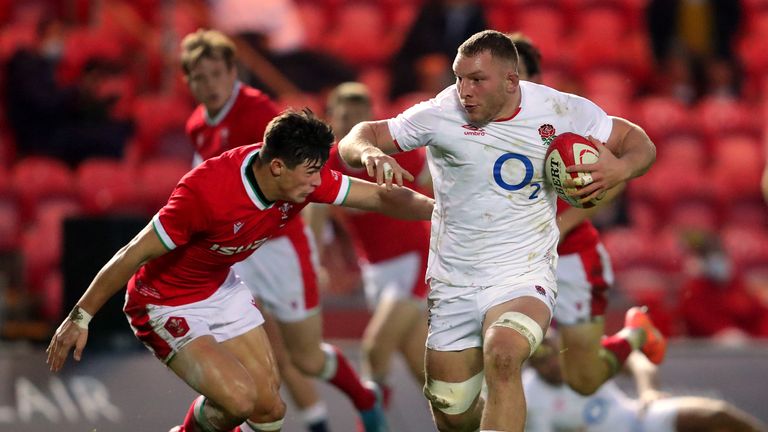 Wales suffered a fourth defeat in five games this Autumn, finishing third in Group A of the Autumn Nations Cup after a battling but blunt loss to England at Parc y Scarlets.

Having rung the changes for the visit of Georgia the week before, Wayne Pivac recalled the likes of Ryan Elias, Alun Wyn Jones, Shane Lewis-Hughes, Taulupe Faletau, Dan Biggar and Josh Adams, while Lloyd Williams made a first start in four years at scrum-half.

The majority of people were expecting Wales to get blown away by an in-form Eddie Jones team in Llanelli, but the men in red were the first on the scoreboard after Owen Farrell missed a penalty and then an opportune turnover provided a try scoring chance.

With England in possession, Henry Slade attempted to nudge the ball into the corner but his kicked was charged down by a blitzing Dan Biggar. The fly-half was able to nudge the ball ahead and Johnny Williams was on hand to hack into the in-goal area passed Elliot Daly and score his first try for his country, with Leigh Halfpenny adding the extras.

The seven-point lead didn’t last long though, with the away side hitting back albeit in slightly controversial circumstances as they won a turnover after Biggar was tackled suspiciously in the air.

Referee Romain Poite said play on though, and England set about attacking clinically, going to the left touchline and then the right before the home defence was sufficiently stretched for Sam Underhill to break on an inside line. He was brought down short but the ball moved back to the left where Slade went over for an unconverted try.

Over the next 20 minutes the game was all about the side wearing the red rose, as they knocked on the door of the Wales defence repeatedly and even broke through with Jonathan Joseph at one point, but a Halfpenny tackle and Josh Adams turnover killed that attack as Wales’ defence held firm in a much improved showing without the ball.

All the pressure eventually told though as Samson Lee was pinged for not releasing and Owen Farrell pushed his side in the lead off the tee, but one of the main features of the game was still the refereeing of Poite and his team of French officials.

First a quite clear high hit on Adams from Daly was missed by all four officials, before a seeming dislike of Wyn Jones from the referees manifested itself as a string of scrum penalties, allowing Farrell to put another three on the scoreboard and send his side in 7-11 up at the break.

The opening 10 minutes of the second half followed much the same pattern of the first as England controlled possession and territory, were physically dominant and forced a brave home defence to scramble and bust a gut in order to simply keep the opposition out.

Again, that can only last so long and when Wales failed to clear their lines, Eddie Jones’ side punished them with Mako Vunipola spinning over from close range after a lengthy attacking set in the red zone, with Owen Farrell converting.

That try did seem to briefly spark the hosts into life, with a hanging Dan Biggar kick not dealt with by Elliot Daly and Leigh Halfpenny pouncing on the loose ball. England were offside in midfield and Biggar cut the deficit by three, before a second moments later allowed him to make the score 13-18 with just over 20 minutes to go.

The resurgence was short-lived though as Ben Youngs broke through a big hole in the Wales defence before finding Anthony Watson on his shoulder. He was dragged down short by Louis Rees-Zammit, but a Wyn Jones tackle off the ball in midfield allowed Farrell to add another three points to his side’s tally.

Wayne Pivac’s men continued to give themselves opportunities, a Callum Sheedy tap-and-go allowed Rees-Zammit to get into space and kick ahead, which George Ford could not clear convincingly. However, a shaky lineout to match the wobbly scrum coughed up far too much good field position.

When Rees-Zammit was then turned over after covering a kick inside his own 22 with just less than 10 minutes to go, Farrell put the game to bed with another three points, securing a 13-24 win for England.

Not quite the scoreline that many had predicted, but the 11-point gap belied the actual gap in quality between the two sides. The English never really had to get into top gear in order to secure a win based off a strong set piece and a dominant pack, while Wales defended valiantly but failed to fire any shots in attack.

Next up is Italy for Wayne Pivac’s men, who are looking to book end the year with dominant wins over the Azzurri.