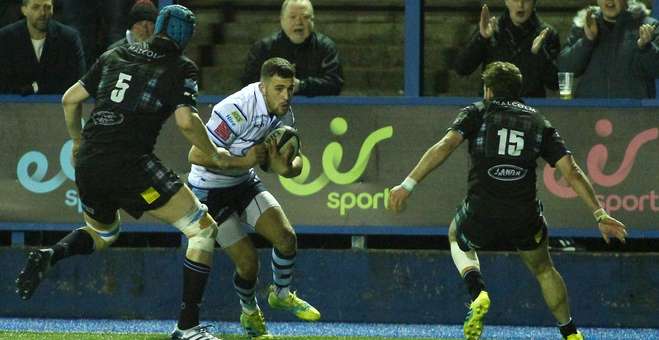 The first block of fixtures in the 2020/21 Guinness Pro14 comes to an end on Sunday night as Cardiff Blues welcome Glasgow Warriors to Rodney Parade, 7.35pm kick-off.

It’s been a battling period for John Mulvihill’s men up until now, with a strong start against Zebre and Connacht being followed by a tough period of games against Munster, Ulster and Edinburgh, during which the injuries and international call-ups racked up.

That culminated in last week’s defeat away at Leinster in a brave performance that kept us in the game until the 65th minute. Three wins and four defeats from the seven games so far this season mean this Sunday is a big one for Cardiff Blues. A win here would mean finishing the block in second place in Conference B, with our play-off destiny in our hands.

To secure that we’ll have to beat a Glasgow Warriors side who have won the last eight straight fixtures between the two teams, stretching back to September 2016, when we beat the Scots 23-19 thanks to tries from Rey Lee-Lo and Alex Cuthbert, as well as the boots of Gareth Anscombe and Steve Shingler.

Glasgow have had a tough start to this campaign though, winning just one of their six games so far. That came back in round two when they beat Scarlets at Scotstoun meaning they have lost four in a row and failed to win away from home so far this season.

The most recent defeat came on Monday night when Munster took a bonus point win home thanks to a late imposion from the Warriors, with Danny Wilson, the former Cardiff Blues coach now head coach of the opposition, pleased with the improvements but still searching for another win.

In order to get that win Wilson has made three changes to his starting XV, with Kiran McDonald coming into the second row alongside Lewis Bean. Rob Harley drops back to the blindside and Ryan Wilson to number eight to facilitate that move.

There are then two new wingers as Ratu Tagive returns to fitness, while Lee Jones will make a first start for almost two years after injury and the coronavirus pandemic prevented him from taking the field.

John Mulvihill, meanwhile, is boosted by the return of three key players to his starting XV that missed the trip to Leinster last week.

Kris Dacey is back at hooker after the birth of his second child, while Jarrod Evans recovers from the hip knock that kept him out of the team in Dublin, and Rey Lee-Lo is back after being knocked unconscious against Ulster a few weeks ago.

The other change sees Gwilym Bradley make his first Cardiff Blues side in place of Alun Lawrence. On the bench there is a return for Sam Moore, and Mason Grady could make his debut if called upon.

With the weather finally set fair for a Cardiff Blues game, there’s a chance for the home side to play a bit of rugby as Evans and Lee-Lo add to the attacking firepower, up against a Glasgow side who struggle to win many turnovers in defence.

As with any Danny Wilson side they are strong up front though, particularly at the maul, while they make more line breaks than most in attack so the defence will once again be called on to ensure the tackle numbers are high along with the success rate.

Back ourselves to play a bit though and there’s every chance of finishing the fixture block with a good win to take into a week off and then on to the European games. Come on Cardiff!