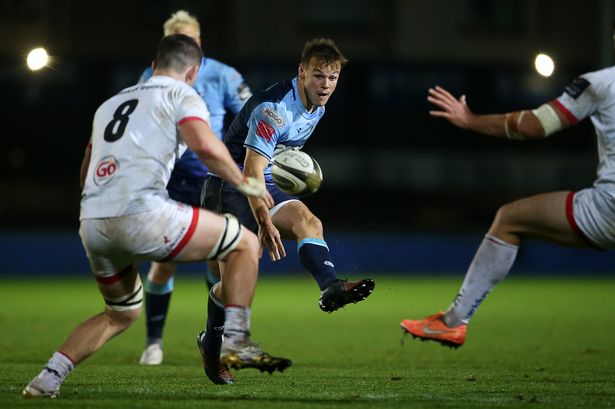 Cardiff Blues suffered a second straight defeat in the Guinness Pro14 on Monday night, going down 7-11 to Ulster at Rodney Parade.

It was another game where John Mulvihill’s men came away thinking that points were left on the field, as the home side missed opportunities to score a crucial try in the second half. However, a losing bonus point maintained second place in Conference B after four rounds.

The boys are back

Josh Turnbull and Will Boyde slotted back in to the Cardiff Blues starting XV on Monday, switching back and forth between blindside and number eight, and putting in two big performances on both sides of the ball.

Between them they made 39 tackles, won four turnovers, made 13 carries and went for 58 metres as they battled hard against a high quality Ulster back row including Jordi Murphy and Sean Reidy. They will be vitally important for John Mulvihill’s squad over the next few weeks.

On the back foot

For the second week in a row Cardiff Blues spent large periods undertaking rear-guard action to defend our own try line, specifically in the first half where we spent 13 and 17 minutes spells stuck in our own 22.

A penalty count that was 1-11 in Ulster’s favour at the break counted towards that in a big way, and meant that like the loss to Munster last week the Welsh side finished with very little possession and territory.

At Thomond Park we had 43% possession and 30% territory, while at Rodney Parade we had just 36% possession and 31% territory. There is very little chance to dominate games and claim the win when you’re trying to make do with such little ball in the wrong areas of the field.

The Samoan centre grabbed the only Cardiff Blues try of the game on Monday night, getting on the end of Jarrod Evans’ kick through for a try that was named the Pro14’s try of the week after Garyn Smith and Will Boyde had combined to set it up.

It was his second try of the season, but more importantly it was his 23rd try for the club since signing in 2015, finally getting him on to the post-2003 top try scorers list.

Unfortunately Lee-Lo departed with a head knock in the second half and will likely miss the next few games as he recovers, so how long he stays on the list remains to be seen.

A consequence of the aforementioned lack of possession and territory, as well as those long Ulster spells in our 22, is that the defence was called upon regularly to stand up and be counted.

Fortunately it was excellent again, finishing with just the one try conceded and 168 tackles made at a 93% success rate. Josh Turnbull (21), Will Boyde and Kris Dacey (18), Corey Domachowski (17), Rory Thornton (16) and James Ratti (15) led the individual stats.

On the league stats overall Cardiff Blues are the top defensive side with 727 tackles made and 33 turnovers won, while Kris Dacey, Olly Robinson, Shane Lewis-Hughes, Dmitri Arhip and Corey Domachowski all sit in the top 20 for tackles made.