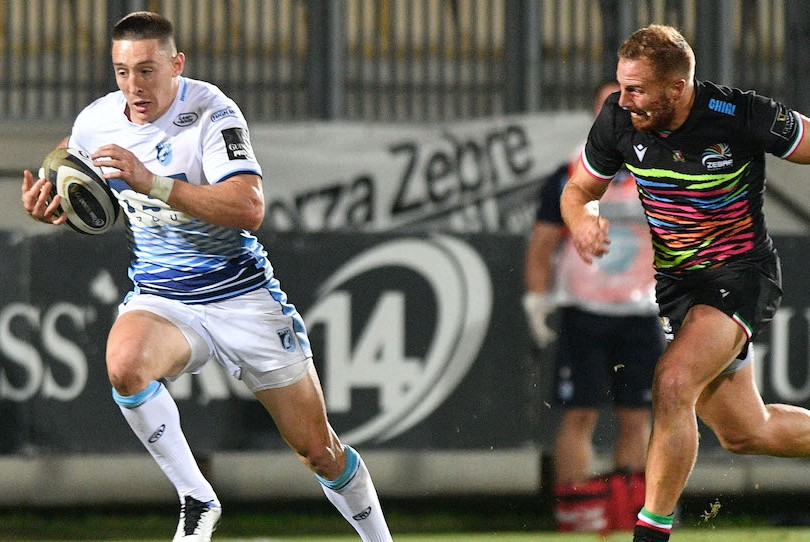 Since rugby restarted for Cardiff Blues after lockdown there have been a number of standout performances that have helped us to three wins in four games.

Corey Domachowski, Seb Davies, Shane Lewis-Hughes, James Botham, Lloyd Williams and Jarrod Evans have all been consistently good across August and October, while others have has one or two excellent performances that have secured dominant wins over Ospreys and Connacht, and a battling victory away at Zebre.

The player who has grabbed most of the headlines has been Josh Adams though, as the winger has scored tries against the Scarlets and the Ospreys in August, and Zebre in round one, taking his Cardiff Blues tally to eight tries in ten games.

Since the start of the Rugby World Cup the 25-year-old has scored an incredible 18 tries in 20 games, including being the tournament’s top try scorer in Japan and currently sitting second in the 2020 Six Nations top try scorer table.

That has come off the back of top finishing ability, but most importantly work off the ball that consistently puts Adams in the right spot at the right time to capitalise on spaces opening up off his wing, and on the shoulders of players such as Jon Davies and Jarrod Evans who can create line breaks for others.

What I want to focus on here though is Adams’ game as a whole, and pitch to you the case that there are very few, if any, better all-round wingers in world rugby right now than the man from Hendy.

We start with the basics, and the hard work that makes Josh Adams such a successful try scorer also underpins his defensive game, making him a threat all over the field. The engine he has is unbelievable as he motors up and down his wing, as well as getting across the field in attack.

There are some fine wingers in the professional game at the moment, but few are putting in the kilometres that Adams is every game, and a big part of that is how he leads the kick chase. Three examples from the last 12 months above, and three turnovers for Cardiff Blues in attacking positions. That’s a player making things happen with and without the ball.

It’s not just about the pressure on the ground though, Adams is also excellent in the air. Of course we all remember the try against England from the cross-kick in 2019, but defensively and in midfield he offers a high ball presence.

Particularly looking at the first clip here, the skill level to take that ball with two hands over his head in traffic is superb, while the defensive take in the second clip is so dominant he even manages to get Cardiff Blues on the front foot to immediately counter attack.

Adams is consistently turning defence into attack, and it’s that attitude that no doubt leads to him scoring so many tries. A desire to get the ball back for his team, and then gets his hands on the ball in areas of the field that can hurt the opposition.

Even when there are no chances to win force a turnover though he is a major part in keeping the opposition out, and despite being ‘just out on the wing’, Adams has played a major part in the Cardiff Blues defence getting stronger over the last year and particularly the last 18 months.

Looking at the second clip and that is a no nonsense stop from Adams on his Cardiff Blues debut against Pau last December. It displays a physical edge to his game which I also love, a bit of niggle that all the top players need, and you can guarantee the Frenchman wasn’t sent down that channel for a one-on-one again in that game.

It’s the first and second clips that are particularly impressive from a technique point of view though. Two dangerous opposition back three players in Alex Wootton of Connacht and Junior Laloifi of Zebre, both with their legs taken straight out from under them as the look to exploit some space in our defence. Show those clips to any junior winger who wants to know how to defend properly. Textbook stuff.

Undoubtedly the best aspect of Adams’ defensive performances over the last year has been his defensive reading and spot blitzing though. This is where he stands out for me, I don’t think there is a better winger at this currently playing.

Now as this attack develops, it’s clear that Zebre have manufactured an overlap as soon as the forward at first receiver opts to play the ball out the back. There will be two men over once Lloyd Williams is taken out of the picture and Josh Adams has a quick decision to make.

What Josh Adams does as a player who can read the game so well and is confident in his own defensive abilities, is spot blitz outside his man, get in his blind spot and make the tackle before the ball carrier even has a chance to make the choice between tucking and running, and throwing the miracle pass.

He does this to perfection and rather than a dangerous attack, Zebre are down behind the gain line and under pressure at the breakdown. This was not an isolated example either.

I’m not here to jinx anything, and it’s a long way until next summer, but it is a continuing source of amazement that pundits are drawing up their British and Irish Lions XVs for the tests against South Africa and not including Josh Adams on the wing.

His try scoring record, his general attacking work, his aerial game and his excellent defence put him head and shoulders above any other winger in Wales, England, Scotland and Ireland at the moment, and right up there with the likes of Mapimpi, Koroibete and Kolbe as the best wingers in the world at the moment.

With my blue tinted glasses on, Josh Adams in the most complete winger around.