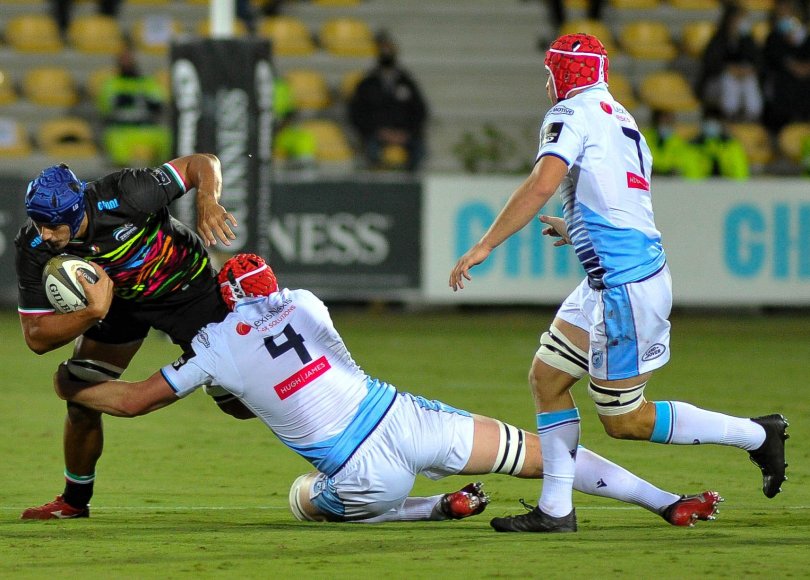 Friday night saw Cardiff Blues return to Guinness Pro14 action as the 2020/21 season got underway with a trip to the Stadio Sergio Lanfranchi to face Zebre.

Despite Josh Turnbull’s red card in the 42nd minute for a high tackle on Maxime Mbanda, John Mulvihill’s men were able to battle to a 6-16 win to get the campaign off on the front foot, actually finishing the weekend sitting pretty at the top of Conference B.

I’ve had a look at some of the key stats from an evening in Parma.

Rewind 12 months and after the opening game of the 2019/20 season away at Southern Kings I was using the Stat Attack to bemoan a lineout that had lost four of our own throws and secure a further set piece in scrappy fashion after the longest pre-season known to man.

On Friday night though there was just the one lost lineout on our own throw, which came early on in the game after a miscommunication meant Seb Davies wasn’t lifted properly. Encouragingly that did not impact our set piece confidence and we were able to go 100% from then on.

More than that though was what a pest we were on opposition ball. We managed to steal Zebre’s lineout on now less than five occasions; one each for Shane Lewis-Hughes and Cory Hill, with a huge three for Davies. Add in another throw not being straight and Cardiff Blues were hugely dominant in this area of the game.

With his first successful kick at goal on Friday night, Jarrod Evans not only brought up the first points of the 2020/21 Guinness Pro14 season, but he also broke the 400-point marker for Cardiff Blues.

It has taken the 24-year-old 77 games to bring up the milestone. He currently sits sixth on the post-2003 points scorers list, with Leigh Halfpenny on 568 points next in his sights.

Although it was Evans who took home the man-of-the-match award, that only went to prove to many supporters that forwards do the hard work and backs take all the credit, with Shane Lewis-Hughes simply imperious against Zebre on Friday night.

The 23-year-old was incredible in defence, making 21 tackles, the most of anyone on the field, and winning a jackal turnover, a maul turnover and stealing an opposition lineout, as he epitomised everything it took for Cardiff Blues to secure the win in Northern Italy.

Teaming up with flanker partner James Botham, who made 16 tackles, Lewis-Hughes covered the work of both the blindside and number eight after Josh Turnbull was sent off, and may well have put his hand right up for a Wales selection when the squad for the Autumn is announced on Tuesday.

Defending for our lives

The win as a whole was based on the defence against a Zebre side who proved from the first whistle that they were keen to run the ball from deep, go from phase-to-phase quickly and try and make the game as unstructured as possible to create try scoring opportunities.

Cardiff Blues were able to maintain incredible discipline and continue to work hard even after going down to 14 though, finishing up with a total of 162 tackles at a superb 93% tackle success rate. Impressively, this restricted the hosts to just two line breaks in the entire game, and only two possessions in our 22.

Friday was the first away game since December 2018 in which we have restricted the opposition to a single digit score, with 13 turnovers won maintaining our defensive identity on top of the discipline and tackle success. All credit to defence coach Richard Hodges for his work in that regard, long may it continue!