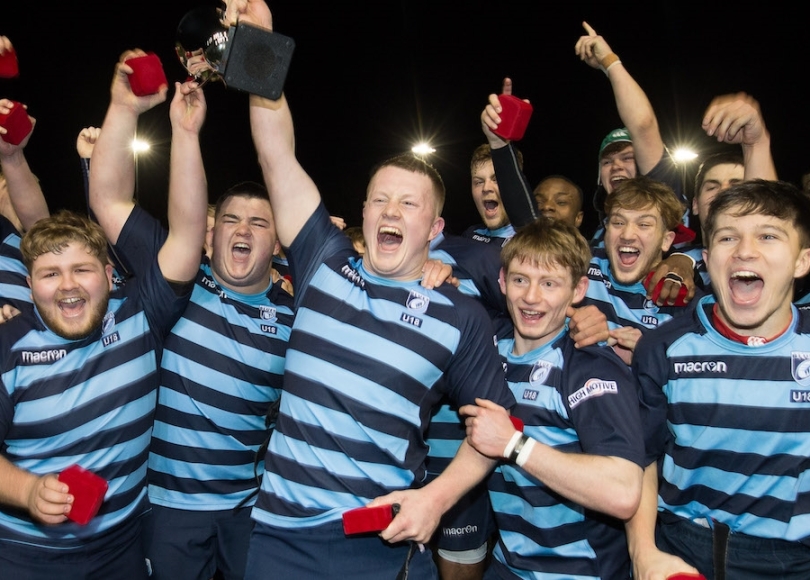 Cardiff Blues have announced the largest Academy squad in recent years as the recovery from the coronavirus pandemic will be strongly based on homegrown talent in the seasons to come.

While savings have had to be made across the business in order to ensure we come out the other side of the crisis, the management have been able to protect the investment made in the Academy that sees a number of players contracted despite not graduating the U18 setup, while others will be educated at private schools in England but will stay tied to the Cardiff Blues.

As announced earlier in the week, six players have graduated the Academy system to the first team this off-season, with Iestyn Harris, Will Davies-King, Teddy Williams, Alun Lawrence, Max Llewellyn and Mason Grady signing their first professional deals.

There have also been four departures from the club with hooker Cameron Lewis, back rower Callun James, fly-half Rhys Davies and winger Alex Varney all heading for pastures new after failing to secure professional contracts.

In their places there are 13 new faces in the Academy for the coming season, joining nine returning players for a 22-man squad working under Gruff Rees, Gethin Jenkins, T Rhys Thomas, Dan Fish, Craig Everett and Nick MacLeod to further their skills and make the step up to senior rugby.

The new signings start at loosehead prop where Theo Bevacqua joins through the Welsh Exiles programme after impressing for Wales U20 earlier this year. Previously a member of the Harlequins Academy, he will combine rugby with studying at Cardiff Blues University.

Also having come through the Welsh Exiles programme is Gwilym Bradley who was formerly with London Irish and spent last season playing BUCS Super Rugby for Bath University. The back rower has put his studies on hold to sign for Cardiff Blues and won Wales U20 honours as well as making his Cardiff RFC debut before lockdown.

Joining them are seven members of last season’s triumphant Cardiff Blues U18 side who won the WRU Regional Age Grade Championship for the first time since 2015/16.

Tighthead prop Nathan Evans signs up having also impressed for Cardiff & Vale College and been called up to a Wales U18 training squad, while his CAVC captain from last season Evan Lloyd is earning rave reviews at number eight.

At centre Immanuel Feyi-Waboso has signed for Cardiff Blues having previously played Rugby League for Wales U16 and competed in athletics with a 24.73 personal best over 200 metres. He has been training with the senior squad since they returned after lockdown and has impressed the coaches with his performance.

In the back three Theo Cabango and Jake Thomas were both on track to earn Wales U18 honours on the annual summer tour to South Africa having been regular try scorers from the wing in the RAG Championship and WRU College League.

That College League regular season was once again won by Coleg y Cymoedd, meaning second row Rhys Anstey and back rower Alex Mann both did college and regional doubles last season, having both won Wales U18 honours in the previous year.

Three of the new Academy signings are even younger talents, having only graduated the Cardiff Blues U16 setup last season after being members of the Dewar Shield winning Cardiff Schools squad in 2018/19.

McKenzie Martin is a convert from prop to back row, comfortable at either blindside flanker or number eight. The Llandaff RFC man was weighing up a scholarship offer from Clifton College, Bristol, but appears to have opted to stay in Cardiff with the impressive CAVC rugby programme.

There is then an established centre partnership with Louie Hennessey-Booth and Harrison James signing up having played together for Llanished RFC, Llanishen High and Cardiff Schools. James, the playmaker who can also play fly-half, will stay at Llanishen for the next two years, while Henessey-Booth, the hard carrying option, will head for Hartpury College in Gloucestershire.

The final new face is Jacob Beetham, who signs up after impressing for Cardiff Blues A and Glamorgan Wanderers last season, with the former CAVC fly-half earning a Wales U20 call-up earlier this year and signing Academy terms with Cardiff Blues.

On to the returners and three players would still be eligible for the Cardiff Blues U18 squad during the 2020/21 campaign if rugby were to return, as hooker Efan Daniel, fly-half Ben Burnell, and centre Ryan Wilkins all continue their development while still in college.

Back rower Ethan Fackrell and scrum-half Ethan Lloyd both graduate the U18 setup having been part of the RAG winning and College League winning sides of Cardiff Blues U18 and Coleg y Cymoedd last season, while Lloyd also played six times for Cardiff RFC.

A few years ahead of them are tighthead prop Ben Warren and blindside flanker Ioan Rhys Davies who both graduate the Wales U20 squad having each started every game of the U20 Six Nations before lockdown. Warren finishes with 15 caps having been first choice tighthead for two years, while Davies finished with six caps having impressed with his physicality in February and March.

Finally, the two senior members of the Academy are scrum-half Jamie Hill and full-back Ioan Davies. Both have been on he cusp of the first team while playing regularly in the Indigo Group Premiership for Pontypridd and Cardiff, respectively, and will be looking to earn more senior minutes this season.