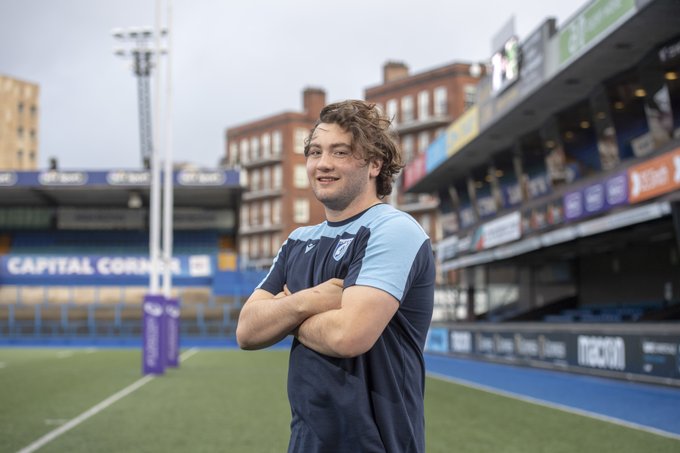 Cardiff Blues Academy players Theo Bevacqua and Gwilym Bradley will train with London Welsh this summer as the link-up between the two historic clubs is strengthened.

The players will spend pre-season at Old Deer Park under the watchful eye of Strength and Conditioning Coach Will Taylor, formerly of Wasps and Ospreys, and Director of Rugby Cai Griffiths, formerly of Ospreys, London Irish and the club he now coaches.

Both are still based in and around the London area having yet to make the full-time move to South Wales after signing for Cardiff Blues last season due to the COVID-19 pandemic.

Back-rower Bradley is taking a break from his course at Bath University to try his luck at the Arms Park, having previously been part of the London Irish Academy, while loosehead prop Bevacqua is set to start at Cardiff University in September and was previously in the Harlequins Academy.

Each have joined Cardiff Blues through the Wales Exiles programme and won their first Wales U20 caps during the recent U20 Six Nations campaign, while Bradley has also turned out for Cardiff RFC in a try scoring Indigo Group Premiership appearance.

The move adds another level to the partnership between Cardiff Blues and London Welsh, after the former hosted a coaching clinic for Welsh’s Mini and Junior section last summer.

Talking to the London Welsh official website, John Mulvihill said, “It gives us at Cardiff Blues great pleasure, and our academy in particular, to be able to work closely with London Welsh and the individual player development will benefit enormously.

“In relation to Theo and Gwilym, our academy staff have worked closely with the Exiles programme over the past 12 months and we are thrilled that they have committed to Cardiff Blues.

“However, given the geographical issues and the uncertainty in landscape for club rugby in Wales , we are hugely grateful to Jonathan Shankland and Cai Griffiths at London Welsh for the opportunity that the boys will have at such a great club with a rich history and connection to Welsh rugby.

“Having said that, this is not just a nod to nostalgia and we are quite certain that the players will receive a high level performance programme in line with our academy standards that are aligned well with the ambitions of London Welsh. We will be monitoring closely through the summer and will look further at the players individual development plan in due course and indeed plan for future link ups between us and London Welsh.”