Since the start of the 2018/19 I have already put together two pieces looking at the achilles heel of the Cardiff Blues in recent times, the lineout.

The first came early in that campaign after the set piece suffered a rocky start over the opening few weeks, before I felt compelled to look at the lineout again after a poor showing against the Southern Kings in round one of this season.

With the 2019/20 Guinness Pro14 season suspended it’s a good time to look at the statistics, and as things stand Cardiff Blues have the fourth worst lineout in the league, losing the third most throw-ins with 26 across the 13 games so far.

It is a continual source of frustration watching us literally throw away attacking opportunities at times, as well as present the opposition with good field position, and no doubt it is as frustrating for the players and coaches as it is for supporters.

One of those games where the lineout was at it’s absolute worst this season was the game that should be wiped from the memories of all associated with it from a Cardiff Blues point of view, the 29-0 defeat to Connacht at the Sportsground in February.

Unfortunately it underlined a lot of the worst aspects of play during the John Mulvihill era so far, and the lineout was one of them, with six lost lineouts and and four others won with scrappy ball.

Now when it comes to the lineout it always feels an easy cop out to simply blame the hooker, but it is undeniable that at times throughout the season, and against Connacht, that the throwing has been below par.

The first clip is under-thrown resulting in Seb Davies having to transfer possession while on the way down and as a result the ball is not delivered cleanly to Lewis Jones, and the second clip is over-thrown with Josh Turnbull having to reach to slap the ball back rather than claim it and form the maul, which Will Boyde at scrum-half is stepping in to do.

It’s not the throwing alone that is the reason for the wider problems within the lineout though, it just feeds into a wider issue with cohesion and confidence that blights the Cardiff Blues set piece at points throughout the last two years. 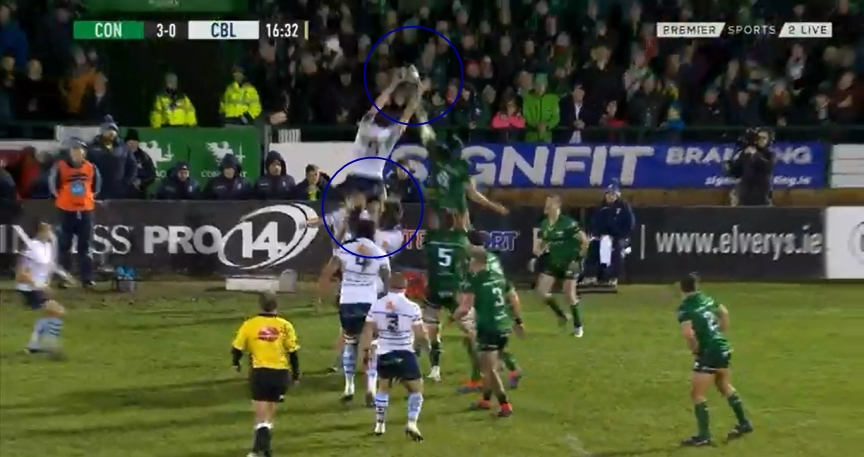 The ideal look for a lineout sees the the throw hit the jumper at the top of their respective trajectories, but in each of these clips an element of that goes wrong, either the throw is dropping towards the jumper or the jumper is not reaching the peak height.

If the first clip is to be won cleanly then the ball needs to find Seb Davies before that dip in trajectory starts and the timing needs to be much better. The speed of ball and the jump speed is off resulting in Connacht being able to disrupt the ball presentation, while in the second clip you can see the arms of the lifters are not fully extended meaning James Ratti is able to be challenged in the air and the ball transfer is delayed.

The feel of the clips is a distinct lack of confidence in the processes that lead to a a successful lineout. There’s a hesistancy in the throw, a hesistancy in the lifting and a hesistancy in the jumping, and against a team like Connacht at their home ground in tough conditions who are happy to challenge everything, it was a recipe for disaster that ended up costing us in the first half.

Beyond the technical aspects of the lineout there is also the tactical side, which Cardiff Blues have equally struggled with at times over the last two years, getting to grips with the lineout system of forwards coach Tom Smith.

Lineout calling is a difficult job as there is a requirement to secure possession first and foremost, has to deal with the conditions and the how the game is going, and also needs communication with the backs to feed into what they want to do in the first phase of attack.

It is not just as simple as calling the lineout in the huddle before walking up and executing it though, as how the other team lines up dictates the final call on the lineout. The best set piece sides can have up to six bailout options on the initial call depending on what they see as they walk to the mark. The two examples see Cardiff Blues move right into a space occupied by a Connacht jumping pod on both occasions despite attempts to deceive the opposition on where the ball will be thrown.

In the first clip we move away from pods to try and trick Connacht into losing their shape, but instead they just bank on placing a pod in the middle of the set piece. Despite having the option to move into Rhys Gill at the front of the lineout or back to Filo Paulo in the rear, Gill steps into the middle and it’s a lost possession.

Then the second clip sees a fake to the front, which can just be seen at the start of the clip, but does not fool Connacht who have set up a pod at the front and a pod in the middle. The fake just sees us move into their middle pod, despite Dmitri Arhip being an unopposed lifting option at the back.

What makes all of this particularly frustrating though is that it’s not simply a case of the lineout not functioning, it’s that issue with confidence that means the lineout is wildly inconsistent showing it’s ugly side as above, but also some more than competent moments. A key lineout in what was still the early stages of the game and it is executed perfectly as Liam Belcher’s throw has pace and accuracy, hits Josh Turnbull at the top of his jump, and he’s been lifted perfectly with the lifters elbows locked, putting him well above the Connacht jumper.

The timing is good, the execution is perfect and Cardiff Blues are able to clear our lines with relative ease. Six minutes later, in a similar position, the previous clip of Connacht scoring off the back of our lost lineout takes place. That is the frustrating inconsistency. 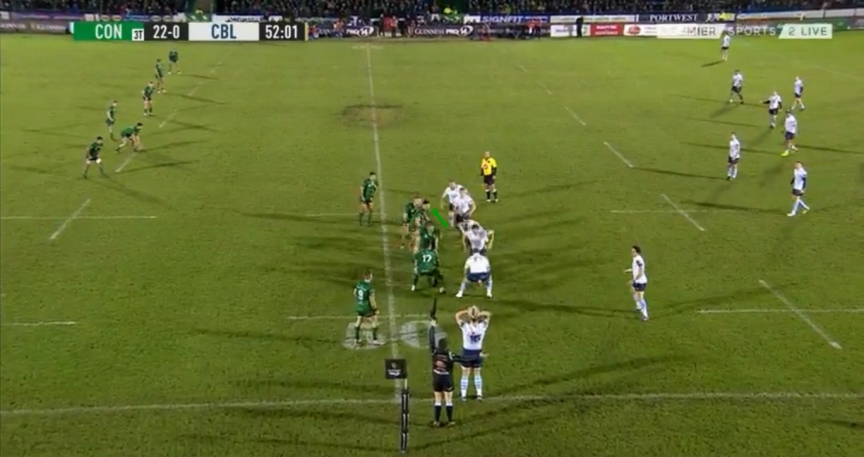 During the course of putting this piece together news has broken that the Scarlets are parting ways with their forwards coach Ioan Cunningham this summer, and this potentially ties in with an opinion of mine that we need more specialist coaches.

Winning the Challenge Cup in 2017/18 with just three full-time coaches was an anomaly and the way rugby is going having up to eight coaches on the books is going to be the increasing norm.

Tom Smith is doing an excellent job when it comes to the breakdown, with Cardiff Blues one of the top club sides in the world in that aspect, but bringing someone in to deal specifically with the lineout and maul would perhaps take us to the next level in that area.

I still retain the feeling that Cardiff Blues are not far away from clicking on the field, and having a strong lineout game will go a long way towards that.