It’s been six-and-a-half years since we last played the Ospreys at the Arms Park, the only time we’ve done it in the league in the last 11 years.

A combination of playing at the Cardiff City Stadium and Judgement Day at the Principality Stadium have meant we have faced them nine times away from our historic home over that longer time frame.

Today should have been the return of Cardiff Blues v Ospreys at the Arms Park, but the Coronavirus outbreak has put paid to that, meaning the wait goes on for the Swansea-based side to set foot back on the plastic pitch.

It remains to be seen what will happen next season, whether the exact same fixtures will be repeated or whether it will switch back to us being the designated home side at Judgement Day and possibly facing the Ospreys next door once again, but hopefully we will get to face them in a real home game sooner rather than later.

In many respects the rivalry between Cardiff Blues and Ospreys has somewhat increased due to the absence of a game between the sides at the Arms Park.

From my perspective I don’t really have an opinion on who is our biggest rival in Wales, and I suspect that any straw pool of the Cardiff Blues fan base would not offer a definitive answer. 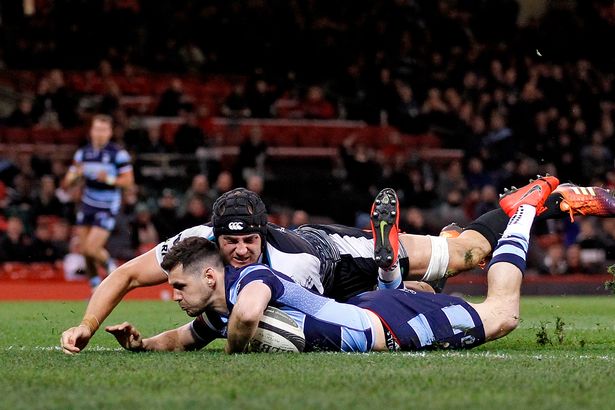 For many who supported Cardiff in the pre-regional days the Dragons will be the the biggest rival as a continuation of the historic rivalry with Newport, while the Scarlets will take precedence for some as the battle of the standalones, with it’s own history and many family links due to the Turks invasion of Pontcanna.

When it comes to Ospreys v Cardiff Blues the fixture at the Liberty Stadium isn’t a particularly attention grabbing one, we tend not to travel in great numbers there and it’s generally played outside of the peak festive window, either early January or October/November time.

However, ahead of the creation of Judgement Day there were some titanic battles between the teams, as both sides had a period of success with Cardiff Blues under Dai Young and Ospreys in their ‘galactico’ phase.

Along with the ‘absence makes the heart grow fonder’ aspect of the game, the rivalry between the two sides has certainly grown for a fixture without any real history and the game that should have taken place today was highly anticipated by supporters of both sides.

Although the suspension of the season is totally understandable due to the current Coronavirus outbreak, it’s still a disappointment not to have this game go ahead. Here’s hoping the chance to face the Ospreys at the Arms Park again comes around soon.

As with the Zebre game last week, I will be posting clips on Twitter of a previous game against Ospreys as the would-be opponents this afternoon. The game will be the 2017 victory at Judgement Day, starting from 3pm.