Rhun Williams’ retirement is really sad news for a player that was set to achieve a lot in rugby, certainly with Cardiff Blues and there was no reason to believe he wouldn’t have stepped up and become a multi-cap Wales international.

He was an eye catcher from the moment he was given a platform as the starting full-back for Wales U20 in 2016. Five starts saw him become a key player in that squad as they stormed to an U20 Grand Slam, earning rave reviews for his performances and signing for Cardiff Blues on the back of it.

Then from the moment he arrived at the Arms Park it was clear he was heading for the top level. Four appearances for Cardiff RFC proved that at 19 he was already a step above Welsh Premiership level, before he made a try scoring debut for Cardiff Blues away at Benetton that November.

Williams really should have won Wales caps at the end of that season when the senior squad played Tonga and Samoa during the Lions Tour, but for an injury picked up against Stade Francais in a Heineken Champions Cup play-off. It would have been deserved reward for a fine debut campaign.

As a player he was everything you want as a full-back. Aware of his positioning defensively, a handy footballer and confident with ball-in-hand. He had the added x-factor of being a brilliant open field runner, able to break tackles at ease, and underlying all of that was a level of bravery that put him in that top bracket of players.

His injury was a devastating one, impacting the nerves in his shoulder to such an extent that it has caused a loss of function in his arm, but it sums up Rhun Williams that he suffered the injury making a big try saving tackle on a marauding second row away at Zebre, successfully keeping Cardiff Blues in a game we were at risk of losing.

It’s no exaggeration to say that if he didn’t make that tackle and the Italian side went on to win the game then we might not have generated the momentum that took us on an unbelievable winning run and all the way to Bilbao at the end of the season. 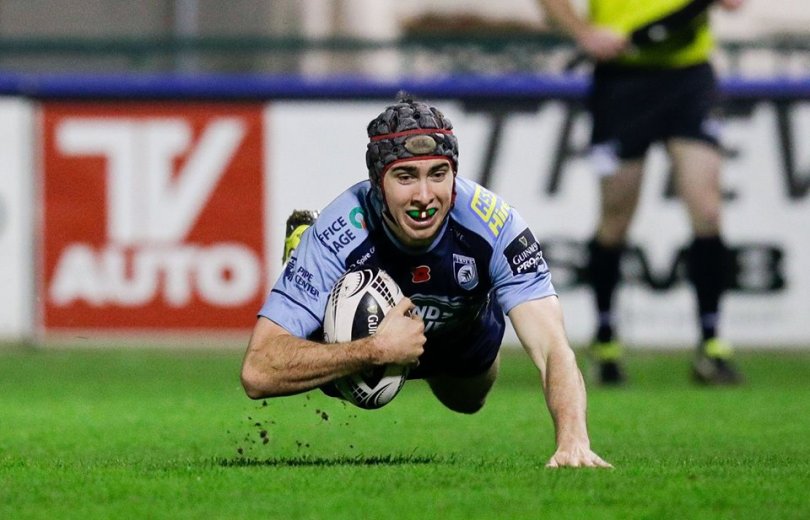 Now I don’t want to make it seem as if Rhun has died! I’m sure he’ll go on to have a happy and successful post-playing life, hopefully supported well by Cardiff Blues and the Welsh Rugby Union.

What I’m aiming for is almost a shortened, slightly sadder, version of a 100 Club entry, as I have no doubt he would have gone on to reach that milestone at the Arms Park, such was his undoubted talent.

It also goes to underline just what risks these players are putting their bodies through when they are representing the club on a Saturday, something that all supporters should remember when it comes to discussing games and performances in the hours and days afterwards.

I’m not going to pretend I’m exempt from having to remember this as well, we can all be better when it comes to discussing individuals particularly. These players are going out on the pitch and putting their health at risk, in-part in order to provide entertainment and earn a victory for us as supporters.

Rhun Williams now follows Sam Warburton as players who have had to hang their boots up early in recent years and will possibly be left with injuries for the rest of their lives. They won’t be the last either.

For Rhun the news is sad, but hopefully his feelings are overwhelmingly proud, as he looks back on achieving so much in just a few years. His contribution to that 2016 U20 Grand Slam winning side is written in history as immense.

Best of luck for everything the future holds Rhun, hopefully see you at the Arms Park plenty down the years!