Cardiff Blues fell agonisingly short in a bid for some unlikely competition points as a last-gasp kick saw us suffer an eight point defeat away at Guiness Pro14 Conference B leaders Edinburgh on Friday night.

It was less than ideal preparation for the game, it’s fair to say, with the squad only training once in the week before due to a five-day turnaround between the win over Benetton and the Edinburgh fixture, before a big re-shuffle of the announced matchday 23 in the build up to kick-off.

First Shane Lewis-Hughes, Ben Thomas and Hallam Amos were ruled out after the captain’s run in the Scottish capital, and then Lloyd Williams withdrew during the warm-up, meaning Will Boyde, Max Llewellyn, Dan Fish and Lewis Jones were all thrust into the starting XV.

Nick Williams, Jamie Hill, Ryan Edwards and Ioan Davies stepped on to the bench, with at least Williams and Davies having to fly up to Edinburgh on the day of the game in order to ensure Cardiff Blues could field a matchday 23.

Despite all that though it was John Mulvihill’s men who made the brightest start at Murrayfield, with some good kicking from Garyn Smith and Dan Fish pinning the hosts back while a Seb Davies lineout steal gave us good field position.

Unfortunately Cardiff Blues could only conjure up a Jason Tovey penalty to show for that impressive opening, after good work over the ball by Will Boyde, before an error allowed the Scottish side into the game. 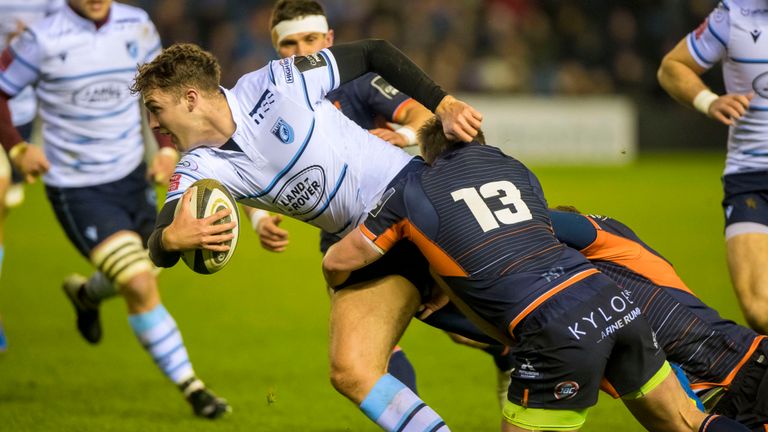 Dan Fish took the restart but spent an age setting up to clear the ball and by the time the kick was made, George Taylor was on hand to charge it down, gather possession and crash over for the opening try of the game.

Fish would be at the centre of proceedings for much of the next 10 minutes though as Cardiff Blues looked to get back into the game, first breaking a tackle and almost making it over the line in the right corner after a flowing first phase move, before his kicking didn’t allow Edinburgh any territory.

Eventually the home side infringed when Lewis Jones was tackled at the back of a breakdown, and then a second penalty conceded at the lineout allowed Jason Tovey the chance to re-take the lead for the Welsh side, but his kick slid wide.

Simon Hickey made no mistake for Edinburgh when presented with a similar opportunity a few minutes later, but some strong defence from the away team, including an excellent Kris Dacey turnover, kept us in the game until Tovey did notch a penalty on the stroke of half-time to make the score 8-6 at the break.

The opening 10 minutes of the second half was fairly cagey as Cardiff Blues fashioned some attacking openings but a few too many handling errors cost the opportunity to score points, and when Jason Tovey departed after being pushed into a clash of heads by Pierre Schoeman it cost the away side our only out-and-out fly-half. 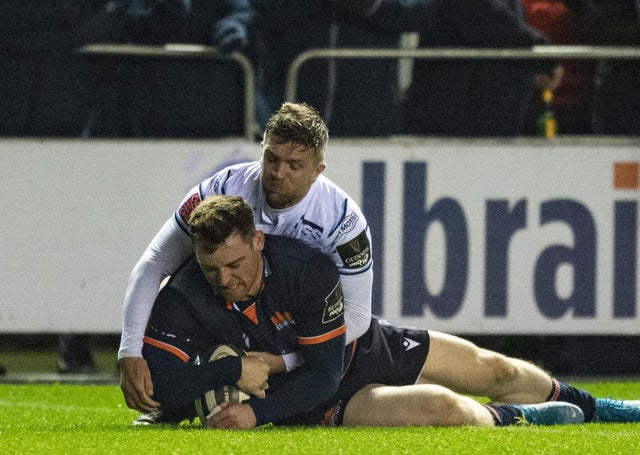 From that moment on, despite the best effort of Dan Fish and his kicking game stepping in at 10, Edinburgh slowly got a firm hand on the game, although it took them another 20 minutes to add points to their lead as the away defence continued to hold strong and frustrate the Conference leaders admirably.

Eventually though the Scottish side were able to ramp up the pressure enough so that Cardiff Blues infringed in our own 22, with Hickey adding three points, and only some good defence from young Ioan Davies making his debut at full-back prevented another try being scored.

With time running out there was still a brave bonus point on the cards for John Mulvihill’s men, but it wasn’t meant to be with inexperience showing at the last. A handling error and then a poor kick allowed Edinburgh to win a penalty over the ball in front of the posts and extend the lead to eight points.

A final chance for Cardiff Blues to score in the second half came and went with the clock red, and it was a case of so close yet so far in the pursuit of taking an unlikely point away from Murrayfield when considering the league positions of the two sides and the injuries suffered by ourselves.

Ultimately a loss but a performance to be proud of as the Welsh side came away with a sense of consistency in performance after the second half against Benetton last week, and a confidence boost to take towards a huge set of fixtures after the Six Nations.