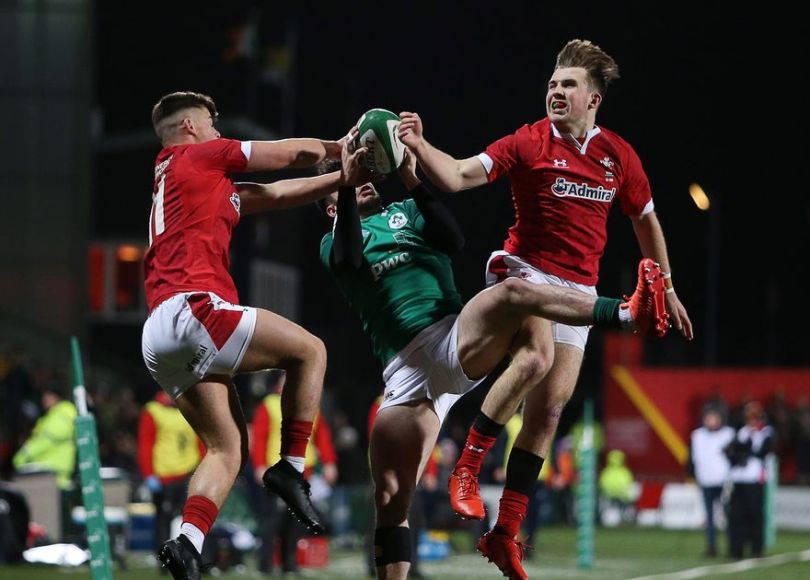 Wales U20 are still searching for their first points in the U20 Six Nations after suffering a second defeat of the tournament, this time to Ireland U20 in Cork on Friday night.

Head coach Gareth Williams made three changes to the side which had fallen to Italy the previous week, with Theo Bevacqua and Will Griffiths coming in up front, while Ioan Lloyd was available and started at full-back.

However, none had touched the ball in open play by the time Ireland had scored the first try of the game after 70 seconds, following a kick-off that displayed the full power of the gale force winds at Irish Independent Park and pinned Wales back on our own five metre line.

Dafydd Buckland’s attempted clearing box kick was charged down and openside flanker Mark Hernan was on hand to pounce on the loose ball for the home team, with Jack Crowley adding the extras from the tee.

Wales attempted to get back into the game as a better Buckland kick was chased well by Ioan Rhys Davies and Ewan Rosser to force a turnover, but the visitors could not fashion a line break from the lengthy attacking set that followed.

In the end it was another error deep in our own 22 that led to a second Ireland try as Morgan Strong had possession ripped from him and Dan Kelly was the man to eventually drive over from close range with Crowley converting once again.

Once again Wales had their chance to get into the game and on the scoresheet, but a cross field kick was tipped away by Ireland winger Ben Moxham, with a question mark over whether it was a deliberate act. A penalty would have resulted in a certain yellow card and possible penalty try but it was decided a realistic opportunity to catch the ball was there.

With the away side unable to break through the home defence there was soon some risky tactics used to manufacture a scoring chance as Sam Costelow went for a kick into space from his own half, but the execution was off allowing Moxham to return possession with interest.

He couldn’t quite make it all the way but scrum-half Lewis Finlay was in support to go under the posts. Crowley added the extras and kicked a penalty soon after to make the score 24-0 at the half-hour mark.

In the end Wales did manage to get on the scoreboard shortly before the break when an Ireland handling error in midfield was pounced on by Osian Knott. The centre kicked ahead with Sam Costelow taking over to dribble the ball over the try line before Knott re-appeared to touch the ball down.

Costelow converted but the joy of scoring soon disappeared as a strong Irish driving maul led to Hernan’s second try of the game right on the stroke of half-time. Crowley’s conversion seeing the lead go to 31-7 as the sides headed for the sheds.

The scoreline was one-sided but Wales knew that the wind would be at our backs in the second half and came out with energy in the opening minutes, Costelow kicking a penalty to begin closing the gap.

When that was followed by a powerful driving maul resulting in a penalty try and Ireland lock Joe McCarthy being sent to the sin bin it seemed that the comeback was on for the away side.

However, Wales could not take advantage of being a man-up over the next 10 minutes, and as soon as the hosts returned to their full complement of players they were over for a fifth try.

The away lineout was falling apart and on turnover ball Ireland struck with winger Andrew Smith getting on the end of an excellent David McCann pass.

There was still time for Osian Knott to bag his second try of the game after Aneurin Owen put him into space on the left wing, but Wales could not push for a try bonus point in defeat and sit bottom of the U20 Six Nations ahead of the visit of France to Colwyn Bay in two weeks.