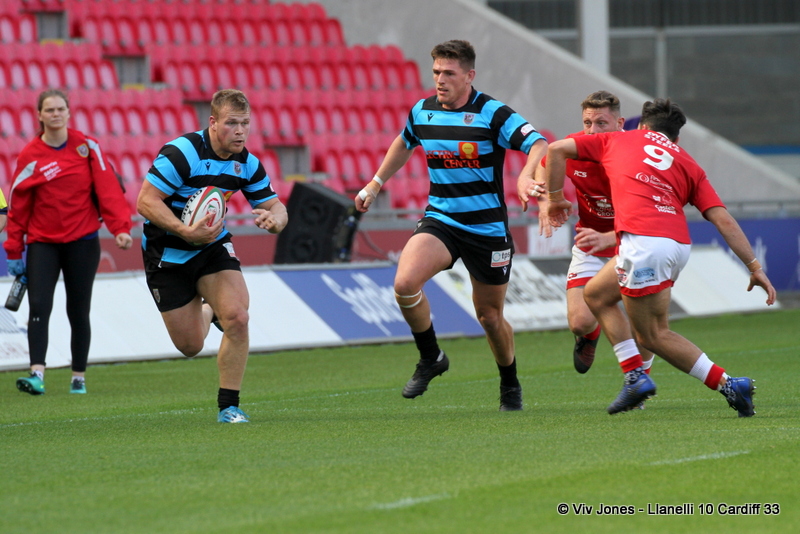 Cardiff RFC return to defending the WRU Specsavers Cup this weekend with a second trip of the season to Parc y Scarlets to take on Llanelli on Saturday, 2.30pm kick-off.

The Blue and Blacks have already won in West Wales this season although had to do it the hard way, turning a 10-7 half-time deficit into a 10-33 final score with the tries coming from Morgan Allen, Barney Nightingale, Sam Beard and a Tom Habberfield brace.

There was also some hard work to do in the return league fixture at the start of this month when Llanelli came back from 14-0 down to level the scores at 14-14 after 55 minutes but Cardiff drew away with tries from Morgan Allen, Max Llewellyn, Jason Harries, Ioan Davies and Evan Yardley securing a 35-14 win.

So far for the Blue and Blacks though the passage through the Cup has been easier than beating the West Wales side in the league, with a 24-40 win away at RGC being followed by a 78-12 demolition of Ebbw Vale at the Arms Park.

However, we come into the game on the back of a 29-7 defeat at the hands of 14-man Carmarthen Quins last week in what was undoubtedly the worst performance of the season, with Steve Law’s squad going to have to bounce back quickly to continue in the Cup.

Llanelli are on the back of some even worse form though with four straight losses in the league, most recently away at RGC last weekend that has seen them slip down to 10th in the table.

The hosts make a number of changes to the 23 that lost in North Wales last weekend with their Scarlets squad members dropping out with the professional side enjoying a few weeks off between fixture blocks.

Greg George is in at hooker, while Jacob Lewis is in at openside as Harry Breeze shifts to the blindside. Ifan Beynon Thomas starts at scrum-half, Jonny Lewis returns as captain at inside centre while Liam Hutchins and Iwan Evans get the nod in the back three.

On the bench Rhys Cherry will cover hooker, Elis Hopkins and Sam Langford are the loose forward cover, scrum-half Iwan Tremblett and back three player Ashley Sutton both drop to the replacements from the starting XV.

The Blue and Blacks have made five changes to the side that lost to Carmarthen last week, with two coming up front as Iestyn Harris starts at hooker and Will Davies-King is in at tighthead, with Evan Yardley dropping to the bench and Keiron Assiratti injured.

Callum Bradbury returns from injury at second row to replace James Thomas who picked up a knock last week, while the back row and the half-backs remain the same, with Zach O’Driscoll set to make his 50th Cardiff RFC appearance.

In the outside backs Max Llewellyn replaces Leon Andrews at centre while Edd Howley is in at full-back as Joe Scrivens drops to the bench.

Joining him there is Matthew Petit, who continues to put off his retirement to cover tighthead, while Nathan Hudd will finally make his Blue and Blacks debut after suffering a broken arm on Cardiff Blues A duty and Jack Brooks is back involved for the first time since September.

Despite both teams coming into the game on the back of some tough results, the Cup allows a moment to escape from form with a spot in the semi-finals at stake.

For Cardiff RFC there is an element of setting the scene for the rest of the season as a whole though, with bouncing back from that Carmarthen result a priority going into two weeks off and then getting back into a winning Indigo Group Premiership run.