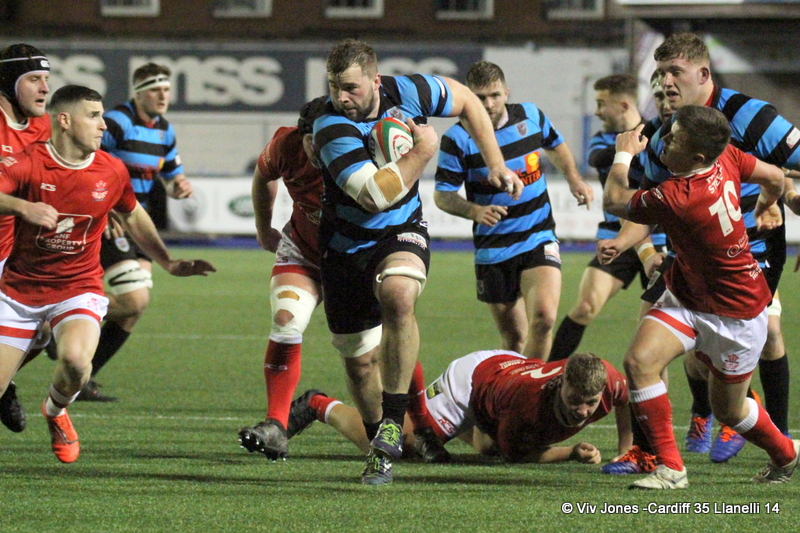 Cardiff RFC sport five changes to the starting XV that lost to Carmarthen last week for the WRU Specsavers Cup quarter-final tie away at Llanelli on Saturday, 2.30pm kick-off.

It was a disappointing defeat at Carmarthen Park, against a team that played with 14-men for much of the game, but the Blue and Blacks will be hoping that a change of focus to the Cup, which we are defending after last April’s victory over Merthyr at the Principality Stadium.

Two of the changes are in the front row where Cardiff Blues Academy members Iestyn Harris and Will Davies-King start at hooker and tighthead, respectively, with Evan Yardley dropping to the bench and Keiron Assiratti having picked up a shoulder knock. Ollie Drake and Peter Lloyd remain sidelined.

In the second row there is a welcome return from injury for Callum Bradbury who has been out since early December with James Thomas missing out after going off at half-time against Carmarthen last week. The back row is unchanged with Morgan Allen allowed to play despite picking up a red card due to the WRU’s disciplinary process taking two weeks.

The half-backs also remain unchanged while there is a return from Cardiff Blues duty for Max Llewellyn who starts at outside centre in place of Leon Andrews, and Edd Howley is recalled to start at full-back with Joe Scrivens dropping to the bench.

He is joined there by the returning Matthew Petit, who’s retirement continues to be put on hold, while an injury to Lloyd Pike last week allows Nathan Hudd a chance to finally make his Cardiff RFC debut after breaking his arm playing for Cardiff Blues A earlier in the season.

Jack Brooks will cover the outside backs for potentially his first run out for the Blue and Blacks since the league away game at Llanelli back in September.