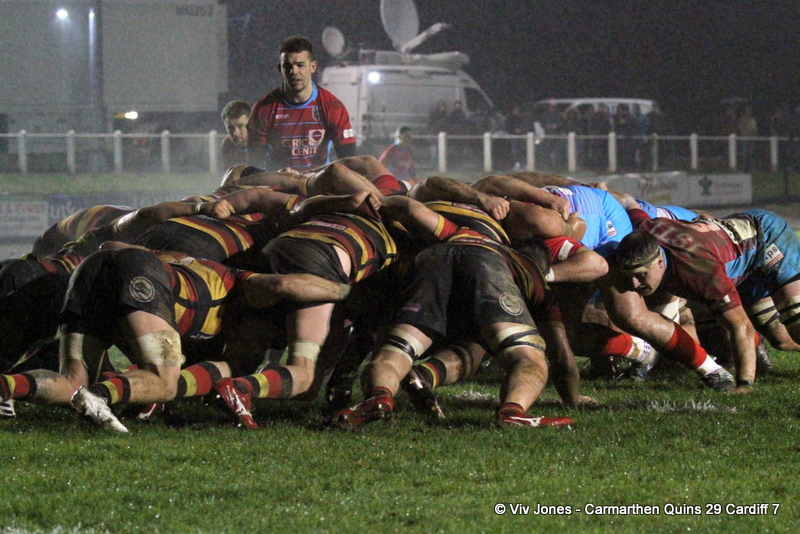 The race for the Indigo Group Premiership title may have been blown wide open on Friday night as Cardiff RFC fell to Carmarthen Quins in disappointing fashion at Carmarthen Park.

It was an intriguing first v second clash heading into the game, with the hosts 15 points behind the Blue and Blacks with a game-in-hand, while both teams were fresh having had the previous week off for various reasons.

Steve Law was without a number of Cardiff Blues players in his squad, with Macauley Cook, Lewis Jones and Dan Fish featuring against Calvisano, but was boosted by Keiron Assiratti and Will Davies-King covering tighthead, while Barney Nightingale and Teri Gee returned from injury.

The drama early in the game was linked to the refereeing though as Carmarthen fly-half Jac Wilson caught James Beal high as the latter took a high ball in his own half. There was a feeling that the Blue and Blacks winger was quite low to the ground, but it wasn’t deemed to be a mitigating factor by the TMO and Wilson was shown a red card.

While down to 14 though, it was the home side who got the scoreboard moving a few minutes later when a penalty allowed them to kick into the 22 and then they flexed their power, taking a driving maul close before carrying over from close range, converting successfully.

However, Cardiff hit back instantly as Teri Gee made a stunning break on first phase ball with Barney Nightingale in support to blast over from close range. Gareth Thompson’s conversion drew the scores level.

That gave the Blue and Blacks a foothold in the game and on the back of two strong scrums we had field position to go through lengthy attacking sets, but on both occasions a lack of cohesive structure in the forwards and creativity in the backs got us nowhere before kicking the possession away cheaply.

In the end that got the home side back into our 22, and with half-time approaching they flexed their power game once more, pushing up to our try line before spinning the ball wide for the score, and converting to take a 14-7 lead in at the break.

If half-time should have allowed Cardiff to regroup and rethink then it didn’t show as the Blue and Blacks came out at the start of the second half still trying to take Carmarthen on in the kicking game and still losing.

That allowed the Quins to continue to exert pressure in our 22 and although one push over the line was held up, a penalty advantage allowed them to stay in possession and opt for the scrum which they promptly drove over for a third try on the night, converted successfully again.

At this point the Blue and Blacks attempted to spark into life, getting through a promising looking attacking set at a much higher tempo, but it seemed the confidence had been largely drained from the side as a knock on stunted momentum before a harsh penalty for holding on allowed Carmarthen to return to our 22.

That in itself was a sign of the game as the penalty was perfectly kickable, but the Quins were playing so well they felt able to go to the corner and the home side pushed a driving maul over for the bonus point try.

To add insult to injury as Cardiff attempted to get on the scoreboard again, Morgan Allen was spotted by the TMO stamping on the head of a Carmarthen player in the middle of the maul. An act totally out of character for the number eight, no doubt borne of frustration at how the game was going, but deplorable nonetheless and a lengthy ban is no doubt on it’s way.

Quins added another penalty and the embarrassment was complete, a 29-7 defeat against a side playing with 14-men for the majority of the game, as the Blue and Blacks were outplayed in every facet of the game.

Credit to Carmarthen, everything about them was excellent, but for Steve Law there is plenty to dissect as Cardiff move on to continuing the defence of the Specsavers National Cup next week against Llanelli at Parc y Scarlets.