Cardiff Blues have won four Guinness Pro14 games in a row for the first time under John Mulvihill after battling to a win over Dragons at the Arms Park on Boxing Day.

Both sides had earned impressive victories to get the festive derbies underway the previous weekend, with the home side winning away at Ospreys and the visitors beating Scarlets at Rodney Parade.

It was two players who played key roles at the Liberty Stadium that were involved in opening the scoring though as Jarrod Evans turned from scorer to creator as he broke the Dragons defence with ease before finding man-of-the-match Shane Lewis-Hughes on his shoulder to power over.

Evans converted and Cardiff Blues continued to put pressure on the away side, working through phases but struggling to piece together anything notable, with only a penalty to show for their efforts at the half-hour mark.

Dragons were working their way back into the game slowly, and although a try saving tackle from Hallam Amos kept one attack out, when they opted to kick a penalty to the corner a few minutes before the break there was nothing the hosts could do to stop a strong driving maul, Taine Basham the man in possession over the line.

Then early in the second half Basham was back involved as he intercepted a Josh Navidi pass before heading downfield. Stopped short by Jarrod Evans the ball was recycled for Ross Moriarty and the number eight’s speculative offload was gathered by Matthew Screech to canter over the line.

Sam Davies’ conversion put the Dragons 10-12 up but Jarrod Evans reclaimed the lead a few minutes later with a penalty as the game became tense and scrappy over the next 15 minutes.

The away side were dominating possession and territory but struggling to create anything against a Cardiff Blues defence that was coming up quickly and winning the breakdown battle. 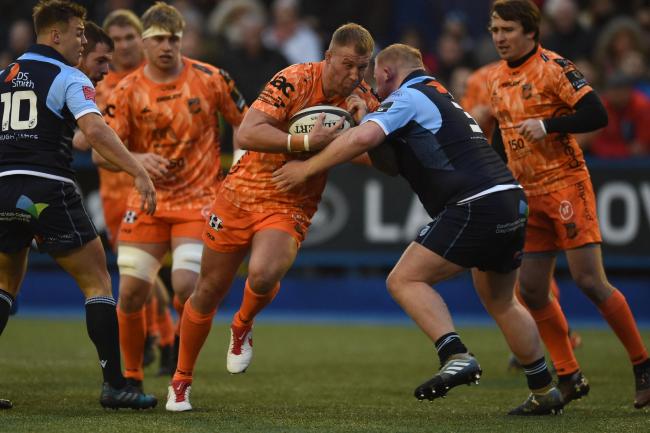 Unfortunately, the hosts were also struggling to fashion attacking chances with handling errors letting us down at key moments, but Jason Tovey, having taken over kicking duties after coming off the bench, made amends for a miss on his first attempt to nudge us further ahead with 10 minutes to go.

There was a further blow for the Dragons when Ashton Hewitt was yellow carded for offside after referee Nigel Owens had issued a warning, and with 14-men the visitors were simply unable to get close to a match winning try, with the final score of 16-12 giving Cardiff Blues the win.

It certainly won’t go down as a classic encounter between the sides, and John Mulvihill will know that his team can perform much better than that, but a win is a win as the saying goes and it keeps the league winning run going.

Cardiff Blues will go into 2019 and a clash with the Scarlets at the Arms Park just four points behind the West Wales side, who currently occupy the third and final play-off place in Conference B, knowing that another win would ensure the festive period was a successful one.