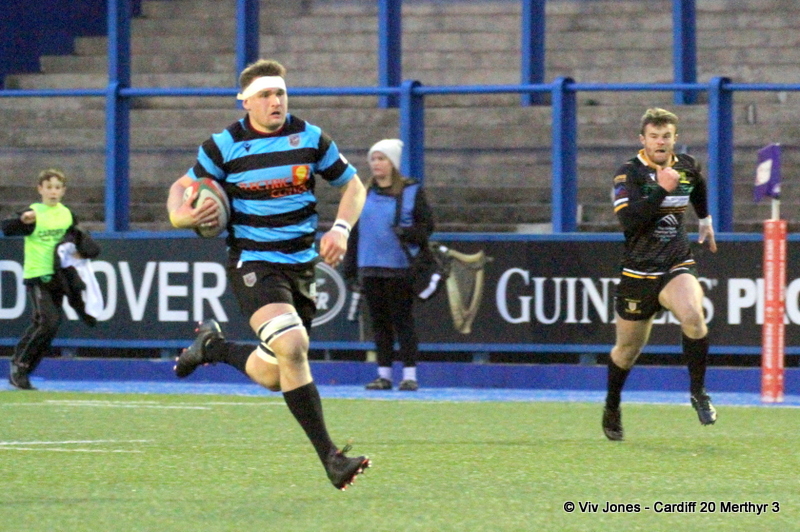 Cardiff RFC made it 10 wins from 10 in the Indigo Group Premiership with a win over reigning champions Merthyr at the Arms Park on Saturday afternoon.

Steve Law had made four changes to the team that beat Newport the week before, with Teri Gee coming in to make his debut on the wing against his former club, but even the extra fire power in a team that had five try bonus points from nine games struggled to break the deadlock.

30 scoreless minutes came and went as the Blue and Blacks and Ironmen went toe-to-toe, with defences coming out on top.

However, Cardiff eventually got points on the board in style as a flowing attack on first phase ball saw Edd Howley released into a bit of space to beat a man and put a kick in that James Beal got to first for his second try in as many games.

Gareth Thompson notched the conversion and traded penalties with Matthew Jarvis as the Blue and Blacks took a 10-3 lead in at half-time having overcome some defensive pressure from Merthyr as Morgan Allen spent time in the sin bin.

The second half was a similarly low scoring affair, with 28 minutes of further scoreless action after the break until once again a special moment got points on the board.

This time it was solo piece of play from Alex Everett who turned defence into attack with a turnover at a breakdown and then a turn of pace to run clear and score his fifth try of the season.

Thompson converted and kicked a further penalty for a 20-3 full-time score, maintaining a 12-point advantage over Carmarthen Quins at the top of the table ahead of a trip to Llandovery next weekend.