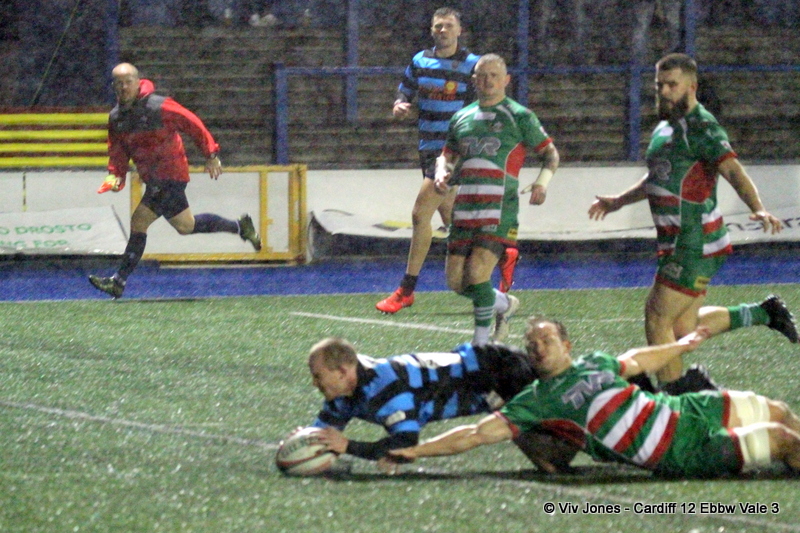 Cardiff RFC continue the defence of the Specsavers Cup title this evening as they once again welcome Ebbw Vale to the Arms Park, kick-off 7.05pm.

It follows the Indigo Group Premiership clash between the sides last week that saw the Blue and Blacks emerge as 12-3 winners in atrocious conditions in the capital, tries from Dan Fish and Ethan Lewis, as well as a Gareth Thompson conversion, bagging the points.

That result ensured Cardiff stayed top of the league with a seven-point margin after five games of the season, while Ebbw Vale continue to struggle down in 10th, just a point ahead of Bridgend and Llanelli who both have games in hand.

However, league form can so often go out of the window in a cup game and the Steelmen will be keen to kick-start their season with a win at the Arms Park on Friday night.

A 39-17 win over Narberth at Eugene Cross Park has seen them into the second round, and they will be looking to add to their solitary appearance in the WRU National Cup Final back in 1998 when they lost to Llanelli at Ashton Gate.

Ebbw have made five changes to the team that lost last week, starting up front where Joe Franchi starts at hooker, and Dawid Rubasniak replaces the injured Owen Young on the openside.

In the backs Matthew Flanagan is in at scrum-half, while Dafydd Thomas and Nathan Preece form a new wing duo. They will be covered by a familiar face as Corey Howells is named on the bench having been released by the Cardiff Blues Academy over the summer.

Rob Sevenoaks starts once again at tighthead despite being sent off in last week’s game for striking a Cardiff player, with the WRU’s disciplinary process taking longer than seven days.

For Cardiff it was a long trip up to North Wales in the first round to visit RGC, with a 24-40 victory ensuring the first Cup game since last season’s Final victory over Merthyr was a success.

Steve Law continues to make changes his starting XV, this time seven of them, starting up front where Peter Lloyd and Ollie Drake swap at tighthead, while behind there is a new second row duo of Callum Bradbury and James Ratti.

In the back row Morgan Allen is back and captain at number eight, with James Botham shifting to openside flanker and Alex Everett dropping to the bench.

There is a return for Tom Habberfield and Gareth Thompson at half-back, as Dan Fish drops to the full-back and Edd Howley isn’t included, while Sam Beard’s return at outside centre sees Max Llewellyn slide out to the wing and Mason Grady miss out.

On the bench there are recalls for Hugo Souto, Sam Pailor and Leon Andrews, while Ethan Lloyd retains his spot as scrum-half cover.

With the weather looking markedly better for this encounter after last week’s wet and windy affair, a very different game is likely to be on the cards.

The Blue and Blacks opting for Thompson, Thomas, Beard and Fish have plenty of creativity, but could struggle to break the line, with only Nightingale and Llewellyn offering real carrying options in that back division.

Once again there is plenty of power up front though, and a huge amount of confidence can be taken from last week’s defensive performance. If that stands up again and wins a similar number of penalties, then the dry conditions should allow Cardiff to take advantage.

Supporters should note that this game is an all-pay fixture, with a discount for season ticket holders in place.