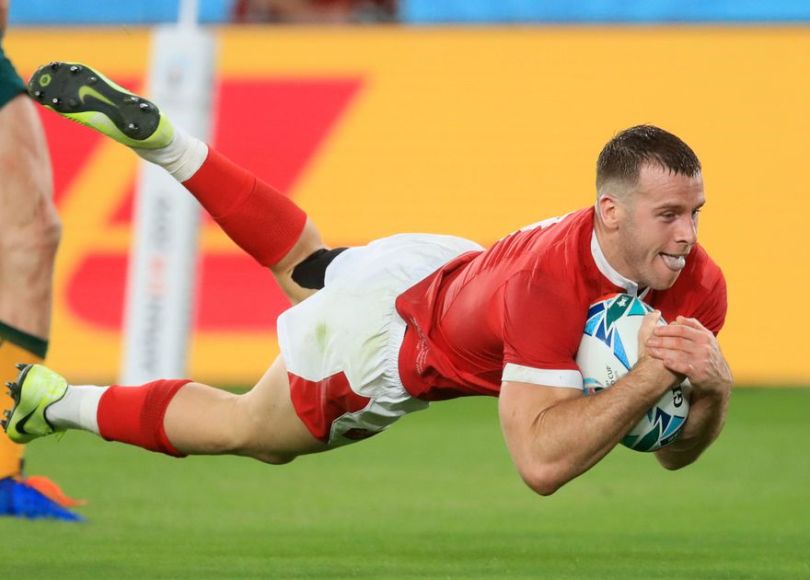 Wales held on for a superb victory to take control of Pool D at the Rugby World Cup as Australia were dispatched in Tokyo.

It is a second win over the Wallabies in a row for Warren Gatland’s men after 11 years of misery against them, and means the team now have their quarter-final qualification in their own hands heading in to nine days of.

Gatland had named an unchanged team from that which beat Georgia in the first game of the competition, and that consistency against an Australian team sporting a few changes from their win over Fiji, saw Wales fly out of the traps.

From the very first breakdown the red jerseys were counter rucking hard and securing the turnover, with Dan Biggar dropping into the pocket and slotting a drop goal inside 40 seconds to take the lead.

He couldn’t kick a penalty a few minutes later, but after 12 minutes he turned from points scorer to provider, as a penalty advantage from a high tackle allowed him to kick cross-field for Hadleigh Parkes to do brilliantly to collect and score. Biggar added the extras well.

Referee Romain Poite was always going to be heavily involved in the action and he had his first involvement inside the first quarter when Michael Hooper appeared to shoulder charge Biggar, but he was only penalised for the lateness of the tackle and stayed on the field.

While the Welsh fly-half was at the centre of much of the early action, the Australians finally started playing at the halfway point of the first period, with Bernard Foley at 10 emulating his opposite number with a kick for Adam Ashley-Cooper to score on the right wing, but failing to add the conversion.

Both teams continued to push for tries, with Josh Adams looking dangerous for Wales, while Samu Kerevi carried well for Australia, only being stopped by a tackle from Biggar that would eventually force him off.

Foley added a penalty as the Wallabies threatened to take advantage of Wales making key early changes, however Rhys Patchell came on and was immediately accurate off the tee, restoring the five-point advantage.

He was involved in the next referee decision as well, taking a forearm to throat when attempting to tackle Kerevi, but the centre was adjudged to have contacted the chest first so also stayed on the field.

Patchell was on target from the resulting penalty though, and was back on the tee just a minute later when a moment of brilliance from Gareth Davies saw him read a slow pass from opposite number Will Genia and jump out of the defensive line to intercept and return the ball all the way.

The extras were added and resulted in a 21-8 half-time lead was well beyond what many would have predicted coming into the game, and left Australia with a mountain to climb.

Just like in the first half Wales were quickest to get going in the second half, with George North breaking down the right before Patchell emulated Biggar to drop into the pocket and knock a drop goal over, but the Wallabies weren’t about to roll over and die.

Moving through phases quickly and not allowing Wales to get over the ball or even set their defensive line, Australia worked down field and eventually a David Pocock offload put Dane Haylett-Petty over with Foley kicking the conversion.

Poite was again called upon at 50 minutes when Josh Adams made contact with the head of Isi Naisarani in a tackle, but he continued to refuse to card anyone.

Australia couldn’t score from the resulting penalty, but the next time they visited the opposition 22 they made no mistake, forcing the Welsh into conceding two penalties and then pushing over the line through Hooper, Foley again adding the two points.

That cut the lead to four points, and when replacement fly-half Matt Toomua kicked a penalty with 12 minutes to go, it seemed like a famous comeback was on the cards.

Wales needed a momentum change and got it when they won back-to-back penalties in the Australian half, with Patchell extending the lead back out to four points, before a brilliant piece of play from Tomos Williams prevented them from kicking a penalty into touch.

Then, with just seconds left on the clock and Australia in the Wales half, Liam Williams managed to pilfer the ball on the floor and Dillon Lewis secured possession to ensure the men in red clung on for a massive victory.

It may well be the case that we should be seeing ourselves as able to compete with the big Southern Hemisphere sides, but our recent record against them has been nothing short of atrocious, so to get a win here is a massive psychological boost.

With over a week off now there is a chance for Wales to recharge the batteries before finishing the pool on a high with what will hopefully be two wins over Fiji and Uruguay, with Warren Gatland having to use all of the players in the squad.