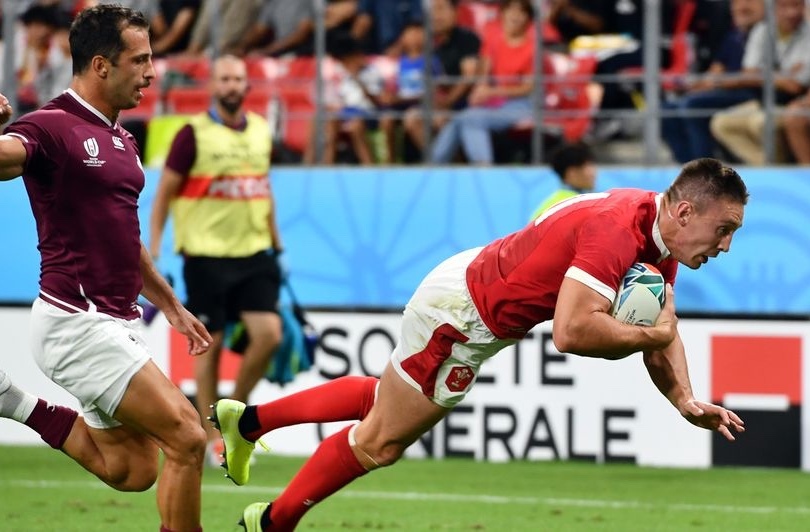 When it comes to ideal starts to the World Cup, scoring inside three minutes, securing a try bonus point in the first half and going in at 29-0 up isn’t far off.

Wales were close to unplayable at times when striking from set pieces against Georgia, leaving the Eastern Europeans with spinning heads as they tried to stop the red jerseys flooding past them.

Tries from Jon Davies, Justin Tipuric, Josh Adams and Liam Williams followed, with the Lelos out of the game before they’d even had a chance to get into it.

The reason Wales were so effective from these strike plays wasn’t completely down to the execution of each play. That was important and each was carried out well, but they formed part of a wider and mixed attacking plan.

When watching tape of Wales throughout the Six Nations, Georgia will no doubt have noticed the trend for the men in red to play off 10 during first phase attacks.

How many times did we see Hadleigh Parkes or the blindside winger carrying off the outside shoulder of Gareth Anscombe? The answer is a lot.

Therefore Wales shortening that up early in the game is what seemingly caught Georgia napping.

For the second time in two minutes it is Gareth Davies who carries laterally from the back of the scrum, this time to the openside, and Georgia are all at sea.

The attention of the 10, 12 and 13 are all on Davies with ball-in-hand, and although roughly picking up their opposite numbers, they give themselves no chance to adjust to Jon Davies’ out-to-in angle.

Then Georgia are adjusting, and Wales are targeting something that appears to have been spotted pre-game, space at the back of the lineout.

The adjustment for Georgia sees the fly-half’s defensive position start a lot narrower than it would have normally, so that when Wales this time play off 10 he is having to make up ground.

By the time he arrives at Dan Biggar his shoulders are pointing towards the openside, leaving a big gap on his inside shoulder.

This happened not only in the build up for the Justin Tipuric try, but also for Josh Adams’ try shortly after, with the Georgian fly-half in an almost identical position.

From the overhead camera the size of the gap on his inside shoulder is clear, and this is where the analysis done by Wales comes in, as they know Georgia opt for their hooker at the back of the lineout, rather than a more mobile flanker.

Josh Adams cuts through on both occasions and, whether under his own power or a phase later, Wales have two more tries on the board.

Then just to rub salt into the wounds of a confused Georgia, the fourth try comes back off 9.

Earlier in the half we had seen the above two phases, as Ken Owens plays 9 from the lineout before play is kept short the phase after as Wales play narrow, one-out rugby.

Just before half-time, however, the play call is different, and Gareth Davies is on the wrap around, getting possession back from Ken Owens.

The execution is perfect to surprise a Georgian defence who don’t know if they’re coming or going, and three defenders are sucked in to what they think is another one-out carrying phase.

Davies comes around on the loop and is met with more space than he knows what to do with. Two passes later and Liam Williams has bagged a bonus point for Wales.

A lesson in manipulation of the opposition defence, good pre-match analysis, and execution of strike plays from a Wales team that did not look impacted by the Rob Howley betting allegations furore one bit.

Now with a week under Stephen Jones the task of unlocking the Australian defence with similar success presents itself. Here’s hoping we have more tricks up our sleeve!