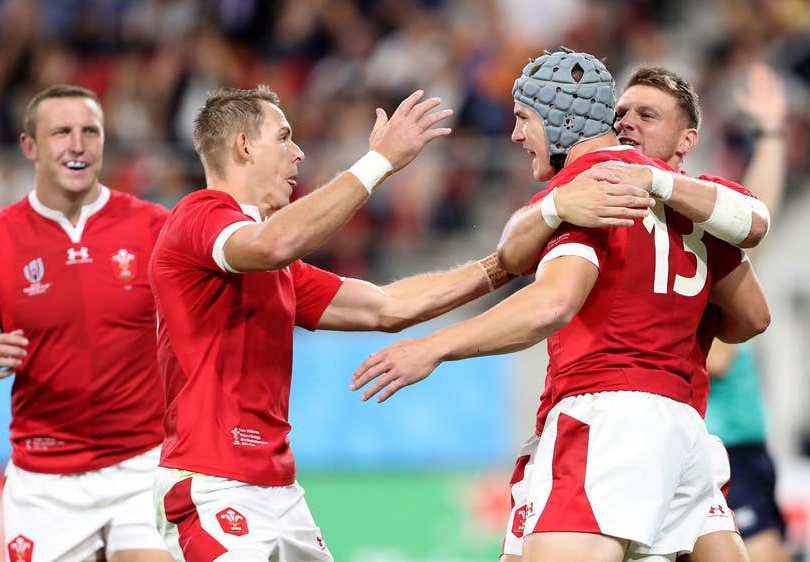 Wales secured a bonus point by half-time and scored six tries overall in an emphatic victory over Georgia to get the 2019 Rugby World Cup underway.

It could not have been a much better start for Warren Gatland, especially in light of a build up that had seen key players Taulupe Faletau and Gareth Anscombe injured, three losses from four warm-up games and the bombshell of Rob Howley’s betting allegations impact the squad.

The head coach had opted for Wyn Jones to start at loosehead, with Aaron Wainwright in the back row ahead of Ross Moriarty and Dan Biggar at fly-half for the opener at Toyota Stadium, and the selections paid off as Wales flew out of the blocks.

Inside three minutes Jon Davies was over the try line after Gareth Davies had committed defenders off the back of a scrum and put the centre into a huge gap to stroll under the posts for a dream start.

An uncharacteristic conversion miss from Dan Biggar was soon rectified when the fly-half kicked a penalty after Georgia had been caught offside, and five minutes later he was successful with the conversion on a second Wales try.

The first phase attack functioned well again as a Biggar inside pass sent Josh Adams through the Georgian defensive line. He found Gareth Davies on his shoulder who was brought down short, but Justin Tipuric was on hand to snipe from the scrum-half position.

Then, approaching 20 minutes on the clock, the third try came from yet another first phase strike play. Again it was Biggar with the inside pass to Adams, but this time he didn’t need support as he stepped past the covering defender and turned the after burners on to go over in the corner.

Biggar converted for a 22-0 lead at the halfway point of the first half, at which point it appears Georgia started to come to life.

One promising attack was halted as Gareth Davies got a hand to a pass, adjudged to have gone backwards when a deliberate knock on would have resulted in a yellow card, while Jake Ball destroyed a dangerous attacking maul close to the line.

Then as half-time approach Wales struck again, with Gareth calling a wrap around play from scrum-half and putting Jon Davies into a huge gap once again, this time Liam Williams was on hand to bag the try with Biggar converting for a 29-0 advantage at the break.

The start of the second half was a slow affair, but it seemed Georgia with a rocket up their backside were determined to make something of the game and after winning a turnover over the ball they kicked to the corner and pushed over with Shalva Mamukashvili the man in possession.

Tedo Abzhandadze added the extras, although Wales almost hit straight back when a powerful driving maul was pulled down inches short, and with the penalty advantage Biggar kicked for Liam Williams to chase but the full-back couldn’t quite gather the ball cleanly.

Georgia did receive a yellow card for stopping that maul, but the Welsh couldn’t capitalise as Gatland emptied his replacements bench, causing the game to falter as handling errors and penalties were conceded.

It took until the final quarter for the game to spark back into life as Wales used turnover ball well, spinning possession wide for George North who kicked ahead and Tomos Williams was first there, touching down not long after coming on.

Biggar kicked the conversion but Georgia kept competitive, destroying a Welsh scrum close to our line and taking a tap penalty that eventually saw Levan Chilachava push over from close range. Abzhandadze once again added the extras.

However, Wales had the last word, and what a last word it was, as Justin Tipuric forced a poor kick clearance straight to Tomos Williams who stepped past three defenders and took another two out with an offload for North who beat two defenders of his own to score a stunning try.

Leigh Halfpenny converted and the scoreline showed a comprehensive 43-14 at the final whistle, with Wales setting down a marker ahead of facing Australia this coming Sunday.

Certain areas of the game will have to improve, with the kicking and defence not quite up to standard, while the quality of the scrum with the replacement front row on will be a worry, but overall it was a more than satisfactory start.

As Gatland noted after the game, Wales tend to get better as tournaments go on, and expect the performance level to be raised once again with the Wallabies opposite.