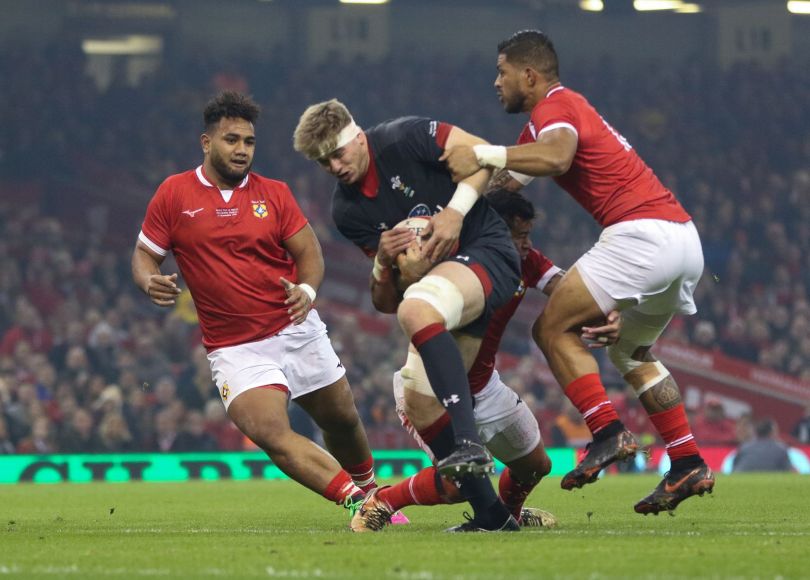 When looking at players who will be key to Wales’ World Cup campaign in 2019 there are some obvious candidates; Ken Owens, Alun Wyn Jones, Justin Tipuric, Dan Biggar, Jon Davies, Liam Williams.

However, there are some that are less obvious. For example, you’ll find few players in the squads of a tier one nation that could be so important, but who have less than 50 first team games to their name between their club and country.

That is exactly the situation we are in with Aaron Wainwright though, who has burst onto the international scene from the blindside, both figuratively and literally.

Rewind five years and the Newport native is an academy player, but at Newport County FC, having been released by Cardiff City FC. He’s turned down the chance to turn professional with them, and picked up a rugby ball for the first time, going on to play for Dragons U18 and Cardiff Metropolitan University RFC.

Just over three years later, in October 2017, he makes his Dragons first team debut against the Cardiff Blues, and now less than two years on again he is set to go to Japan for the Rugby World Cup.

So what makes Aaron Wainwright such an obvious candidate to be a member of the 31-man squad in a position of such strength in Wales? It starts with sheer hard work.

In defence the stats speak for themselves when it comes to Wainwright’s performance against England on Sunday, where he started on the blindside and showed his versatility by switching to the openside for the final quarter.

His 20 tackles were not only the most in the Wales team, by a huge seven tackles, but they were the most of anyone on the field, as he covered a huge amount of ground without the ball and put in some physical hits.

More than just the dogged defender at blindside though, Wainwright adds a lot to the attack with his unseen hard work.

Whether it’s tracking back and showing some nice hands to take the offload from George North, or working hard to get around the corner and secure possession in the opposition 22, his work rate and reading of the game allow him to make positive impacts around the field.

With six carries he’s an option to go to with ball-in-hand, but what he offers in visits to attacking breakdowns is key. Although there are no stats publicly available in this area, it’s not an over-exaggeration to suggest he’d be in the top three Wales players, bringing that physicality to securing possession on the floor.

Then to cap off his performance is perhaps the most impressive aspect to his game as he has developed an eye for the dark arts of flanker play despite having been playing rugby, let alone at the top level, for a relatively short amount of time.

Whether it’s holding in his opposite number at the scrum to create some extra space for Gareth Davies, or clearing out an English player across a ruck to create a gap for Wyn Jones to dive over, there are little details that give Wales an edge.

At this point Aaron Wainwright is not assured of a spot in a Wales starting XV against a top team, it’s a fair guess that Josh Navidi starts ahead of him at blindside, but his reliability and versatility will make him a key man in Japan.