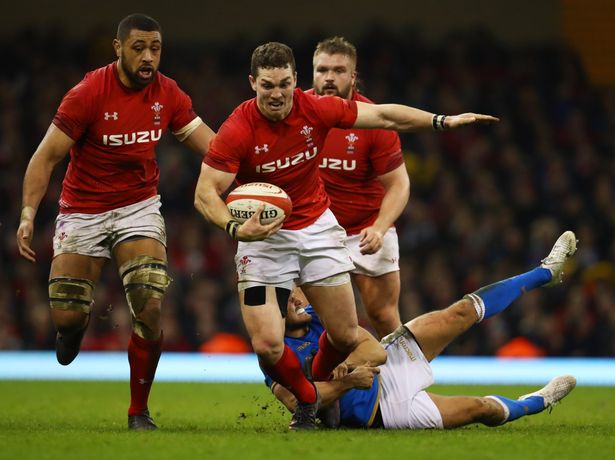 Over the next three games there will be a lot of focus on the individual fitness and form of the Wales squad as Warren Gatland prepares to name his 31-man World Cup squad.

Places are up for grabs on the plane and in the starting XV, no doubt about it, but to simply focus on who goes to Japan, and not how they’ll perform on the other end is somewhat short-sighted.

This is a Wales squad that is on a 14-game winning streak, are Six Nations and Grand Slam champions, and could be the top ranked team on the planet after the weekend, with the best chance to make it to a World Cup Final yet.

To achieve that though, I think we have to get better in attack. There’s a nagging doubt in my head that we don’t have quite enough firepower going forwards to beat teams when push comes to shove. It’s very difficult to win the World Cup based on the defence alone.

The statistics show the last three World Cup winners, New Zealand in 2015 and 2011, and South Africa in 2007, having scored an average of of 35.5, 25.5 and 31.25 points per game in their four games against tier one opposition, at an average of between three and four tries a game.

Wales during the Six Nations, on the other hand, averaged 22.8 points per game and just two tries a game, scoring less total points in their five Six Nations games than the 2015 All Blacks and 2007 Springboks in their four games against tier one opposition.

Looking at the Wales attack, there are no ‘issues’ as such. There’s no fundamental problems with how we go forward, it comes down to having the willing and confidence to play a bit.

That desire to move the ball seems to be obviously looking during first phase attacks, with Wales playing very narrow throughout the Six Nations, rarely venturing more than two passes away from the set piece.

Whether it’s bringing the inside centre or blindside winger off ten, or putting them in at first receiver, it restricts the attack, and rarely allowed us to move the ball quickly on second phase.

With the firepower of Jon Davies, Liam Williams, Josh Adams and George North out wide, working space for them to play in should be the sole aim of first phase ball as when possession is shifted, there are yards to be made.

Whereas with first phase ball there doesn’t seem to be a huge amount of willing to move the ball wide, in open play there is more desire to get the backline moving, but there are two issues; how and when.

In terms of ‘how’, it’s about the use of the forwards, and creating that space to play into, utilising the slightly hybrid 1-1-2-2-1-1 formation that Wales have developed over the last two years.

Both clips evidence the same fundamental flaw in the attacking shape which sees the inside ‘1’ in the forwards formation shaping to come in as a one-out carrier from the outside shoulder of the first receiver.

The issue is that once the scrum-half pulls the ball back to the first receiver the defence has more than enough time to adjust their focus and body positions to drift across, forcing Wales back inside on each occasion.

If the forward was to hold outside the the first receiver and run the dummy line off him, holding the inside defence, then there could well be a chance to create an overlap or open up space in the line.

Of course Wales would have to be able to take advantage of any space, and identifying ‘when’ that might open up is not one of our strong suits.

In both examples above there is some disjointed midfield defence from France and Italy, with Wales setup well on both occasions to take advantage of that, but choosing to tuck the ball up the jumper instead.

With two three-man pods, the pre-called move should see a forward in the first pod pull the ball back to Dan Biggar, with the second pod then flat to him lining up against a maximum of two defenders. Pick the right option and it’s at least front foot ball, and a good chance of a line break.

There’s some similarly poor decision making on when to get the attack narrow and when to move the ball wide when it comes to putting the outside backs into space.

In the first instance the pull-back to Biggar is the play to call, while the second clip should either see Gareth Anscombe miss the carrying pod or the carrying pod pull the ball back to Haldeigh Parkes.

Both would open up opportunity for the dangerous outside backs to carry into space and create a try scoring opportunity, rather than just see Wales moving through another phase.

The frustration with the Wales is that when we do move the ball wide and identify the space we can capitalise on it to great effect.

Whether it’s putting Dillon Lewis from a forward pod into a gap in midfield, or pulling the ball back behind the forward pod to expose space out wide, resulting in a try in the final clip, we look like a serious attacking outfit.

Developing the confidence to do that more often will go a long way to putting points on the board in our bid to win the World Cup, and could see us do it in some style.

There’s no place like a pre-World Cup test match to test out some new attacking shapes, all eyes on Twickenham on Sunday to see if there’s any development in this area.