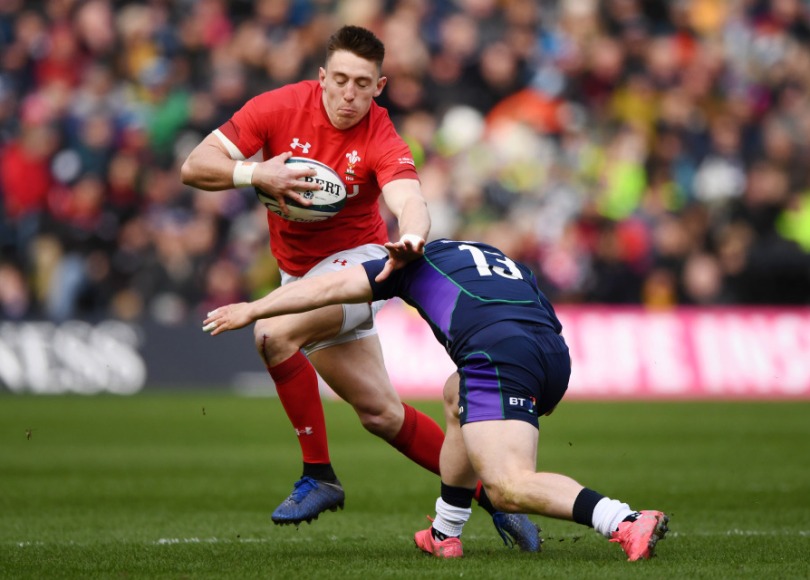 The New Boys, a series looking at Cardiff Blues’ new signings, returns this summer as I assess what each of the players arriving at the Arms Park for the 2019/20 season will bring.

We start with arguably the highest profile signing of the summer as the 2017/18 Gallagher Premiership joint-top scorer and 2019 Six Nations Player of the Tournament nominee Josh Adams arrives at the Arms Park from Worcester.

It’s been an unconventional journey to the Pro14 for the 24-year-old, who started his career in the Scarlets development pathway courtesy of growing up in Hendy and attending Ysgol Strade, before being released at 19.

From there it was over the Severn Bridge to Worcester, where he took the long route to the first team, biding his time with Worcester A, on loan at Nottingham, and at Cinderford, playing alongside amateurs in the National League One.

While in the Championship with Nottingham his parent club suffered an injury crisis, and after taking his chance with both hands, he would remain a permanent fixture in the team at Sixways for the next two and a half seasons.

65 appearances in all competitions came with a huge 39 tries, including 13 in the 17/18 Premiership season, and he quickly found himself involved in the Wales setup for the first time, making his debut in the 2018 Six Nations and going on to win 11 caps, scoring four tries.

It was in this season’s Six Nations that Adams really came to the fore though, with three tries in five games, a Player of the Tournament nomination and the securing of a place in the starting XV and a place on the plane to Japan.

Adams has a lot of great attributes, which we’ll come onto as the piece goes on, but the cornerstone to his game is sheer hard work, something which has no doubt come from his Scarlets career not taking off and spending his time in the English lower leagues.

Going forward after kicks and back in defence, he matches speed with a big engine that sees him cover more ground than most wingers, even in the modern game where wingers are running further than ever.

More than that though, he adds a rugby brain to his hard work. Looking at the second clip, where a lot of players would go straight to Gareth Anscombe and secure the ball, he works into a position to receive the ball and make a few yards back, as well as allowing support to track back.

With the ball, that hard work manifests itself in his desire to get his hands on the ball as often as possible, hunting in-field for work, often to good effect.

Whether that comes from first phase ball and appearing off the blindside wing, sliding into midfield and taking on the forwards in the defensive line physically, or even sniping from the scrum-half position, he’s keen to be involved and moving forwards as much as possible.

The culmination of that is this try whereby, having tracked the attack across from his left wing position, he appears at first receiver and breaks through a gap in the French defence, with new team-mate Tomos Williams on hand to score.

In terms of his attributes, defensively he is very solid, something which perhaps gets overlooked when assessing Adams as a player such has been his attacking prowess at Worcester and with Wales.

As physical in defence as he is in attack, it’s his positioning and body shape that are most impressive, opening up his shoulders to prevent any clear two-on-one opportunities, either forcing the outside attacker inside or being able to make a tackle on the player with ball-in-hand.

Add in an excellent read to bite in and make the hit on Manu Tuilagi in the last clip, and it’s a complete defensive picture, but perhaps not surprising from a player comfortable at full-back.

15 starts at full-back in the league and Europe in two seasons means that Adams has enough experience to slot in as required, and could form a scintillating back three along with current Cardiff Blues wingers Owen Lane and Aled Summerhill before even factoring in Hallam Amos.

More than solid under the high ball, he is also a handy footballer, and can clearly hit the attacking line well in midfield. Clearly a winger long-term, that added versatility makes Adams an even better signing.

He’s clearly a winger because, although he’s got an excellent all-round game, the bread and butter of wing player is getting chalk on your boots and making metres, and Adams does both of those in abundance.

A beautifully balanced runner who maybe doesn’t have the highest top speed but is quicker over the first five yards than most, he also has the ability to make decisions when shifting to find an offload or chip ahead well.

Bring that all together and it’s no surprise he is a prolific try scorer, who hopefully will only add to the try scoring abilities of the aforementioned Lane and Summerhill, as well as Jason Harries, Matthew Morgan, Rey Lee-Lo and Willis Halaholo.

There’s no question that, when available, Josh Adams can only add to the Cardiff Blues team, and that his acquisition should bring bums on seats and feet on terraces, as he lights up the Arms Park.

I, for one, am very excited about seeing him fly across the plastic pitch to the try line when he returns from what is, hopefully, a very successful World Cup campaign.