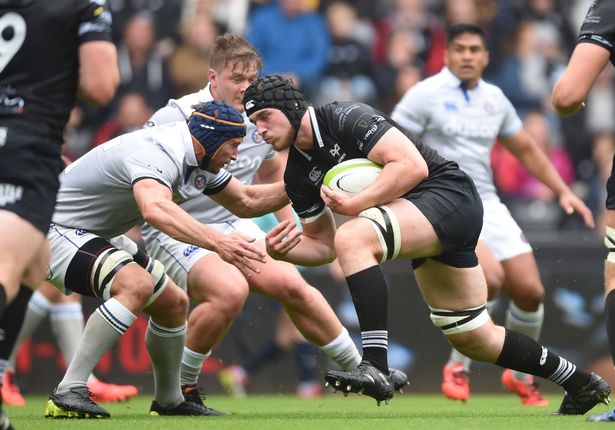 Cardiff Blues have been linked to young Ospreys second row James Ratti, after the West Wales side confirmed he would be leaving the Liberty Stadium this summer.

The 21-year-old was one of seven players confirmed as leaving by the Ospreys at their end of season awards on Friday night, having struggled to make the grade from promising youngster to first team regular.

Ratti played for Dunvant RFC’s mini and junior sections, before moving through the Ospreys age grade system, alongside playing for Llandovery College and Gower College, and earning Wales U20 honours in 2017.

Taking the next step on the development pathway, he played for Aberavon in the Premiership between 2015 and 2018, as well as playing 11 times for the Ospreys Premiership Select in the British and Irish Cup, and eight times for Ospreys in the Anglo-Welsh Cup during the same period.

After making his Pro14 debut last season against Zebre, he was hoping to kick on this season, but has been restricted to just three further league games and a Challenge Cup outing, with the likes of Alun Wyn Jones, Adam Beard, Lloyd Ashley, Bradley Davies and James King ahead of him in the second row pecking order.

Instead he has appeared 17 times for Swansea RFC, winning their April Player of the Month award, helping the Whites out of relegation trouble and into a solid eighth place in the Premiership.

Listed as 6ft4, but only 14st, on the Ospreys website he will need to bulk up over the summer to be a quality addition to the Cardiff Blues engine room, and compete with Seb Davies, James Down and Macauley Cook, as well as the versatile Josh Turnbull, for a starting spot.

Elsewhere, Cardiff Blues are still confident of securing Rory Thornton on a permanent deal, also from the Ospreys, but interest in Will Boyde has significantly cooled while news on whether Nick Williams can be re-signed is awaited.