It’s fair to say that Friday night was not the start to the Six Nations that many Wales fans were hoping for after a hugely successful Autumn International campaign.

On a wet and cold Paris evening, Warren Gatland’s men lacked the accuracy or intensity to compete with a resurgent France side in the first half, with Les Bleus operating with a clever kicking game and moving the ball quickly to strike for two first half tries.

However, the second half saw a complete turnaround as Wales broke the record for the biggest comeback in competition history, scoring three tries on the way to a 19-24 win that maintained an unbeaten streak going back to the back end of last year’s Six Nations.

Reasons for the dramatic change in fortunes for both teams have been debated since the final whistle, with the performance of replacements and improvements in the kicking game credited for Wales, while France moving away from a kicking game that worked well for them and making too many individual errors hindered them badly.

Perhaps something that allowed the hosts to get the upper hand in the first half was their dominance at the attacking breakdown though, while simultaneously some slightly naive play from Wales when trying to organise their defensive system.

Looking at the build up to both French first half tries there is a running theme that allows Les Bleus to create the space to get Louis Picamoles and Yoann Huget over the line. 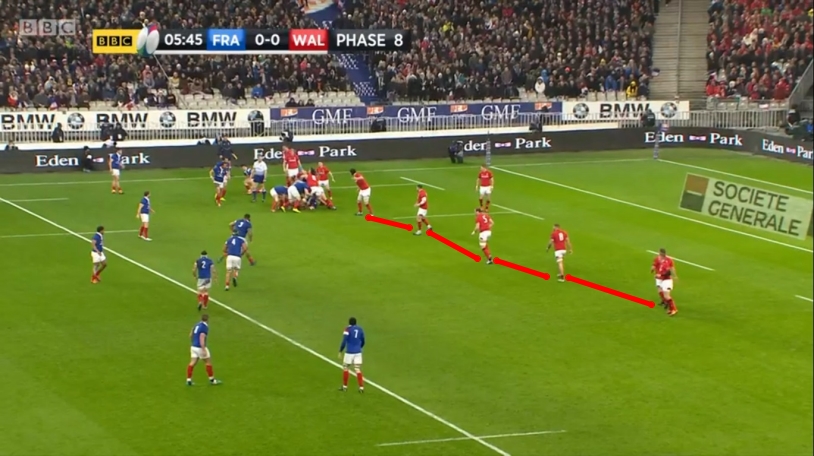 Wales came out with a clear defensive game plan that saw tacklers going very low on the much talked about massive French pack, bringing them down early and then getting over the ball to effect turnovers or at the very least slow the opposition down.

The idea presumably to test the theory that French forwards are not always up for doing the physical grunt that is required of tight five forwards, while also taking advantage of the speed we possess in the back row between Josh Navidi and Justin Tipuric.

However, on successive phases Wales commit lose four bodies to the tackle and breakdown area, resulting in the defensive line we see in the final image with big gaps between the red jerseys.

France take one quick phase as Uini Atonio drops the ball back to creating a two second ruck, before Camille Lopez and Maxime Medard combine to give Louis Picamoles the space he needs to crash over from close range.

It’s not just the fact we’re losing bodies to the breakdown, it’s who they are. Defensive leaders like Hadleigh Parkes, Jon Davies, Josh Navidi and Justin Tipuric are trapped in the tackle area or on the blindside as France shift the ball quickly to the wide open areas, leaving guys like Josh Adams and Gareth Anscombe in impossible situations.

Then ahead, of the second tries, we make similar errors, but also more complex issues relating to the identifying of when to jackal and when to form up. From two big carries France manage to take six Welsh players out of the game, although we only commit two players to the breakdown on each occasion.

However, with Gareth Anscombe falling off the first tackle, and then Alun Wyn Jones moving beyond the second tackle to block the French latch, they too are removed from the defensive line of Wales.

The second man at the breakdown should identify this and form up instead, but the tactic to target the ball on the floor is fresh in their minds, they get committed and we wind up with a defensive shape that sees just three red jerseys coming off the line on the openside against at least four French options. Jon Davies extinguishes the initial danger with an excellent defensive read, but Wales once again put two more men into that breakdown, allowing Damian Penaud to go up against three forwards on the right wing, easily dancing inside them to make good metres.

Now on the scramble and with a number of men on the left wing, Wales can only gather three man to get off the defensive line again, but this time France have even more men over, and a poor decision from George North allows Yoann Huget over in the corner.

Two tries from two defensive sequences where we over-committed to the breakdown and failed to get into the defensive shape that not only served us well in the Autumn Internationals, but has served us well for a decade under Shaun Edwards.

It may well have been more not too long before half-time. This time we commit five men to a breakdown deep inside our 22 and right underneath the posts. Three were tacklers, two in Adam Beard and Justin Tipuric unnecessarily get trapped in the tackle area.

As a result France have the opportunity for at least a three-on-two situation to the right hand side, but three failures to identify it, from Camille Lopez, Morgan Parra and Uini Atonio means the home side go an extra phase and Hadleigh Parkes can scramble across to make a tackle.

That, in the end, sees France held to two tries in the first half rather than three, allowing Wales to head in at the break to re-group and restructure the attacking game. First point of order? Forget about going all-out to secure turnovers on the floor.

As Julien Marchand breaks a tackle and gains a few metres, Wales begin to switch to scramble defence.

The hooker is eventually brought down, and it is the actions of Josh Navidi that signal the change of tactic as he gets himself in a position to strike at the breakdown, but chooses to maintain his role as guard in the defensive line, with Rob Evans to a lesser extent doing the same as the man defending behind the tackle area. As a result, even though Wales are on the back foot slightly from the go-forward of Marchand’s carry, the defensive line is set far better than it was in the first half and the red jerseys drift across the pitch comfortably, killing space for any French attackers lurking out wide.

The visitors go on to score again through the George North interception, and then the change of defensive tactic returns to play with a few minutes to go as France make a last ditch attempt to save the game. In the first clip we see Gregory Alldritt break a Ross Moriarty tackle and slide forward, gaining France some momentum, but rather than dive into the breakdown, Cory Hill and Justin Tipuric form up as the ruck guards.

This means that when France move to the right quickly both Jon Davies and Josh Adams are on hand to cover the ever dangerous Gael Fickou, with only Adams staying trapped at the breakdown.

Rather than leave the Welsh defence scrambling, France are faced by a re-formed and ready to blitz red wall.

The phases go by and France cannot break down the re-invigorated Wales defence, who take confidence from the improved organisation to improve the intensity and physicality that underpins a Shaun Edwards system.

A maximum of two players taken out by any carrying phase, just Wyn Jones involved after Ross Moriarty takes the legs of the carrier in the second clip, and dangerous runners like Maxime Medard forced back inside by a well organised defence.

10 phases later France have made no metres, and after 21 phases of solid Welsh defence they throw a forward pass and the attack comes to an end, with Warren Gatland’s men seeing out the rest of the game. It was not the polished Wales we were used to seeing in the month of November, but it was a Wales that ground out a win in tough circumstances, and in some ways that is as impressive as dominating South Africa, or defensively beating Australia.

We must remember that the unbeaten Autumn came within the comforts of our own home. Teams came to Cardiff, to play in front of our supporters and in our stadium.

This on Friday was a trip to Paris, always a tough place to go no matter what the form of the hosts, in some miserable weather and with the added nerves of being round one of the Six Nations.

To overcome the psychological barrier of a poor first half and a 16-0 deficit, make the defensive adjustments and bag three tries is something to be proud of. Now the challenge comes in getting the attacking game going properly in Italy next week. A bonus point win should be the aim.