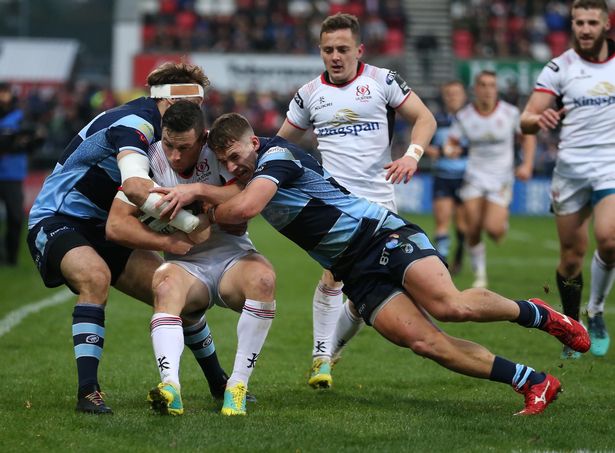 Last week’s 45-10 defeat to Glasgow was a humbling experience for all involved with Cardiff Blues, as an important yet tough fixture block got off on just about the worst foot possible.

A bonus point conceded before half-time, failure to hold on to possession, a poor kicking game, some questionable attacking intent and an all-round lack of effort contributed to what was undoubtedly the worst defeat of the season so far.

In the week that followed there was a lot of focus just on the severely underperforming defence, with 21 missed tackles, 17 line breaks conceded and five tries given up not at an adequate level to compete at the top end of the Guinness Pro14, let alone the Heineken Champions Cup.

As a result a few days of intense defence training clearly followed as Richard Hodges and the player leadership group worked to return an organisation and intensity to the Cardiff Blues defence that was such a bedrock of our form at the back end of last season.

That paid off as we restricted Ulster to just the one very fortunate try and four line breaks at the Kingspan Stadium. Admittedly there was 24 missed tackles, but this goes to prove it is the system rather than the individual attitude that makes a defence in many respects. More on that another time.

Now though I want to take it back a bit from the defence during phase play to the transition from attack or unstructured play into defence, and how we managed to invite a lot of pressure onto ourselves in Glasgow, before preventing that happening in Ulster.

A huge gripe after the Glasgow game was the effort shown when Cardiff Blues were without the ball, as the players came in for criticism, deserved in my opinion, for not working hard enough.

This was particularly evident when we were without the ball as on too many occasions players were bunched around breakdowns rather than forming up in the defensive line, leaving us looking stretched and too often stuck in one-on-one situations.

It starts in transition, and on this occasion the lack of effort stems from the kick chase as Glasgow are allowed to take the quick lineout and carry the ball back into the Cardiff Blues half, setting up an attack close to out 10 metre line. 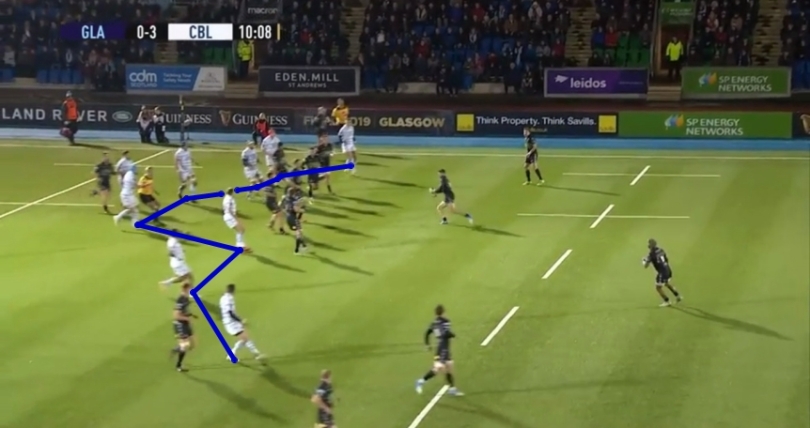 Admittedly on this occasion the Lloyd Williams clearance kick should absolutely be heading into the stand, however that does not excuse the shape of that kick chase.

The transition period sets the tone for the defence. A strong kick chase and dominant tackle allows the defensive line to be formed while moving forwards, as well as causing the opposition to have to track back further in order to form up in attack.

On this occasion the disjointed nature of the kick chase means Glasgow make good yards on the return, setting up just outside the 22 and giving the home side the upper hand in terms of forming up in attack quicker than Cardiff Blues can set their defensive line.

Straight away we are on the back foot, and this lack of effort and organisation can let opposition sides off the hook when it should be Cardiff Blues putting the pressure on.

The kick through is a decent option and Glasgow do well to recover it, however Cardiff Blues should still be able to press the home side into getting stuck just outside the 22 and having to kick the ball back to us.

Unfortunately you look at Brad Thyer, Kieron Assiratti, Seb Davies and Olly Robinson there and how slow they are in getting to the line and how far off the offside line they are when Callum Gibbins picks the ball up.

It’s an easy out as the pressure is relieved from Glasgow as they can move forwards in possession, rather than being stuck close to their own 22. Little details but set the defensive tone and can shift a game one way or another.

Fast forward a week, and Cardiff Blues are giving ourselves a much better basis from which to start a defensive set. 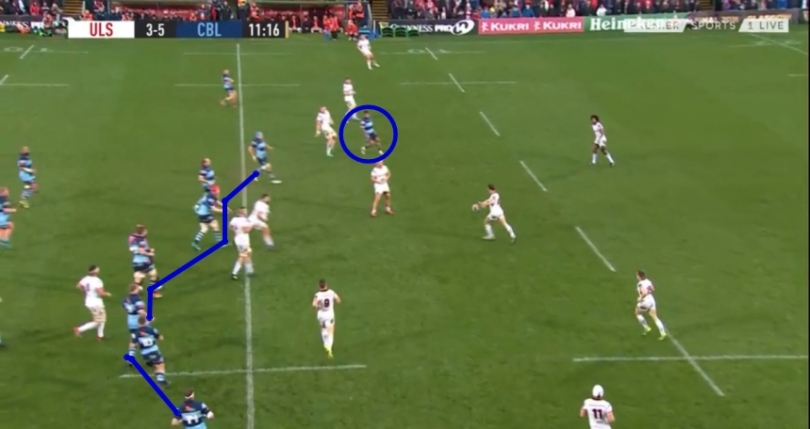 Early in the game and Lloyd Williams goes for distance with the clearing kick, with the kick chase vastly improved from Cardiff Blues.

Pushing up towards halfway, which should be the yardstick from a kick like this, with Rey Lee-Lo spot blitzing to keep Ulster narrow and preventing them from switching the counter attack which worked so well for Glasgow, is a great shape.

If Billy Burns does choose to carry the ball back the likelihood is that we can make the tackle inside his own half, allowing the defensive line to form up and blitz on the front foot as Ulster scramble to get set for an attack.

That is put into practice here as the experienced and dangerous Henry Speight is prevented from making any serious ground on the kick return, being held up and eventually turned around to begin the defensive set.

Coming up next week is undoubtedly the toughest test of the season as we travel to Saracens, and if we’re going to stand any chance of winning this area of our game is going to be key.

Having looked at how Wales are so good in their kick chase and the pressure that builds on the opposition, the players coming back from the national team setup have a real responsibility to impress the importance of this aspect of the game on their teammates. Particularly Gareth Anscombe who could well find himself leading the kicking game.

Field position and not allowing Saracens easy exits will need to be an absolutely minimum, before building on the intensity shown in defence against an Ulster team who weren’t near the level you’d expect the English champions to be on home turf.

Last Saturday was a good start, but Cardiff Blues can’t rest on their laurels. The transition and defence has to build on that week-on-week.