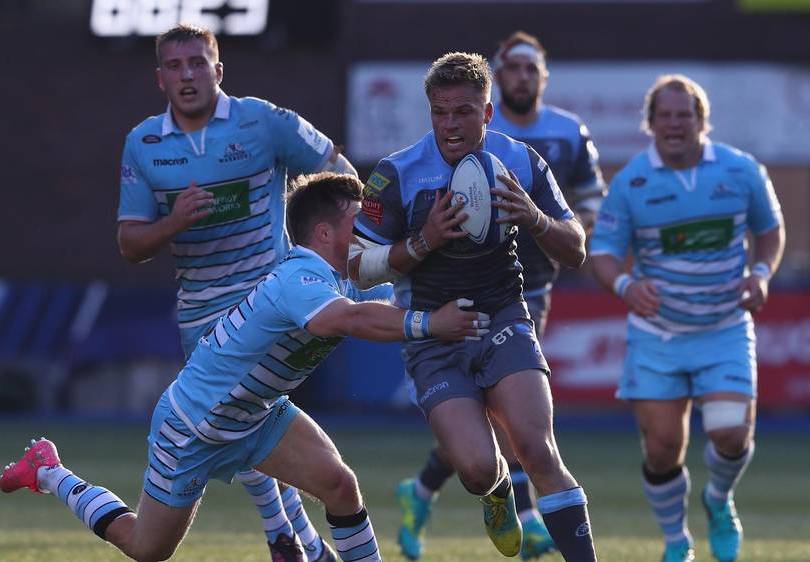 There was huge disappointment for Cardiff Blues as a lacklustre performance saw the Heineken Cup’s return to Cardiff Arms Park end with a 12-29 defeat to Glasgow Warriors.

After last weekend’s excellent victory away at Lyon over 9,000 supporters packed into the ground hoping to see John Mulvihill’s men repeat that performance and make it two from two in the pool stages, but a rampant Glasgow dashed those hopes, beating us in almost every facet across the field.

Injuries meant the Cardiff Blues coach was forced into three changes, with George Earle, Nick Williams and Aled Summerhill coming in for Macauley Cook, Josh Navidi and Owen Lane, respectively, while Rey Lee-Lo was preferred to Garyn Smith at outside centre.

Before the action even begun there was confusion as both teams coming out of the tunnel in extremely similar jerseys, Cardiff Blues wearing this season’s light blue and grey European jersey, while Glasgow Warriors were not in the black jersey you might expect, instead modelling a light blue and white top.

If that wasn’t confusing enough for the home supporters in the stands, there was sheer bewilderment as it appeared the team did not seem to have realised the game had kicked off, with the whirlwind that was Glasgow crossing for two tries before the clock had even ticked past five minutes.

First a long flat pass released number eight Mat Fagerson down the middle of the pitch, before he found Tommy Seymour in support on his shoulder. The winger was pulled down but Glasgow recycled the ball well and Adam Hastings was able to get around the outside of Gareth Anscombe and reach for the line.

Hastings missed the conversion back was back on the tee within two minutes as Ryan Wilson offloaded for Fraser Brown to break. Huw Jones was on the hooker’s shoulder and he streaked downfield before drawing the last defender and sending DTH van der Merwe over the try line. Hastings was on target this time and all of a sudden the visitors were 0-12 up.

After that blitzing Cardiff Blues finally got their hands on some decent possession and played a bit of rugby in the opposition’s half, however in the space of around 15 minutes we turned down four penalties that, even with the wind from the River End, seemed kickable, instead punting to the corner and failing to convert chances into tries.

Half-breaks from Anscombe and Aled Summerhill looked dangerous, while Rey Lee-Lo and Jason Harries almost linked up to great effect, except Harries did not see Lee-Lo on his shoulder after one break, while the centre’s pass to the winger during a second break was deemed forward.

Glasgow, on the other hand, won one penalty in front of the posts and kicked it to extend their lead to 0-15. Despite having the majority of possession and territory, Cardiff Blues went in without scoring and with the subdued atmosphere of a busy Arms Park hanging over them.

There was still a sense that the home side may be able to get back into the game if we could convert pressure into points early in the second half, but that plan went right out of the window as, once again, the visitors were the team who flew out of the blocks.

A simple attacking move in midfield saw van der Merwe come off his wing and across to the right hand side of the field where a screen pass sent him through a huge hole in the Cardiff Blues defence before he found Ali Price running a support line on his inside shoulder for Glasgow’s third try of the afternoon.

Hastings converted again, but within five minutes the hosts finally got on the scoreboard with a well worked try, in the end.

Gareth Anscombe made a break coming up from full-back, but his inside pass failed to find hands. Fortunately Dillon Lewis scooped up the loose ball and although he was tackled, the recycled possession found Jarrod Evans who put in a perfectly weighted kick through for Aled Summerhill to touch down in the corner.

Again Cardiff Blues enjoyed a huge amount of possession and territory, more in the second half than the first half, but despite regularly breaching the Glasgow defence they could not get over the try line. The lack of an offload game and a dodgy lineout no doubt contributing to our inability to score.

The refereeing at the scrum and the breakdown was somewhat inconsistent, while a few passes went astray which could be attributed to the kit clash, but neither are even close to excuses for what was on the whole a very disappointing performance.

It was compounded in the 67th minute when Glasgow, feeding off what little possession they had in the second half, manufactured a bonus point try.

A missed tackle deep in their 22 allowed Adam Hastings to release George Horne, who’s brother Peter was on his inside shoulder but pulled down short. However the ball was recycled quickly and Hastings prodded a kick through for Matt Fagerson who offloaded for Jonny Gray to canter over the line.

Summerhill got on the scoresheet again in the dying minutes of the game, with the conversion giving Cardiff Blues the same 12 points that Glasgow had scored inside five minutes, but it was nothing but a consolation as we came away with exactly what we deserved – nothing.

There’s no doubt that this game will be a reality check for both players, coaches and supporters as we re-adjust to life at the top table of European rugby. The key now will be the reaction though, both short and medium term.

This week sees the squad minus those called up to Wales’ squad for the Autumn Internationals travel to South Africa to face Cheetahs, and they will need to bounce back quickly in what is an important Conference A fixture in the Pro14.

Then the players and coaches, many of whom are experiencing Heineken Cup rugby for the first time, need to ensure lessons are learned from the Glasgow game, in terms of the intensity and accuracy required to compete even with teams we are used to facing in the league.

It’s another test of the squad’s mettle while we are still early into the reign of John Mulvihill, all eyes will now be on the reaction. Keep the faith, come on Cardiff!