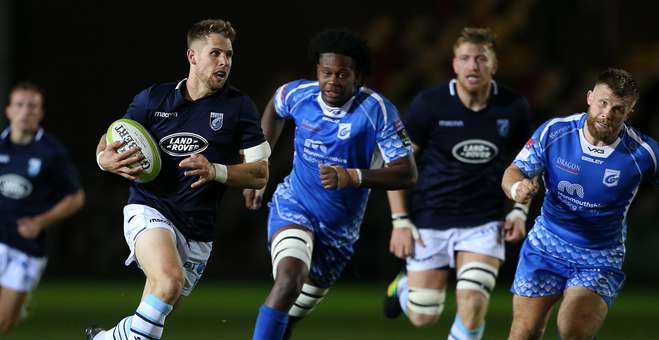 There was a strong start to the new Celtic Cup development competition for Cardiff Blues A on Friday night, but coaches T Rhys Thomas and Richie Rees will be sweating on the fitness and availability of some key players ahead of round two.

After a warm-up game against Scarlets A on August Bank Holiday weekend, Cardiff Blues A’s first competitive game saw them travel to Newport to face Dragons A at Rodney Parade on Friday night, with the Celtic Cup replacing the British and Irish Cup as a stepping stone between age grade and senior professional rugby.

A strong team was named with 20 players coming through the system in the Cardiff Blues region, 17 aged 23 or under, with seven first team players getting valuable game time and loosehead prop Fraser Young stepping up from the Cardiff RFC squad.

Up against a young Dragons side the experience of the Cardiff Blues A back three told, with a game that was largely even in the tight opened up by the work of Tom Williams, Aled Summerhill and Dan Fish early on.

Williams provided for Fish to score the first try, before turning scorer after an offload from Summerhill for the second try, as Steve Shingler’s boot gave us an 18-0 lead at the half-hour mark, but it seemed the game might follow the patter of the friendly against Scarlets when Lewis Jones was sin binned.

He failed to retreat 10m before stopping a tap-and-go, with Dragons kicking into the corner and driving a maul over the line, but then they handed momentum back to the visitors by failing to exit properly from the kick-off.

Liam Belcher pounced as Dan Babos dithered and the ball was knocked free to be collected by Dan Fish who gladly strolled in for his second try of the game.

The game then ended as a contest within the opening minutes of the second half as first Tom Williams scored his second after running a beautiful line off Shingler, before Ben Jones collected his own up and under and offloaded for Summerhill to score in the corner.

That was the positive on the night, unfortunately the negatives started to rear their head as injuries hit the back row, with Cai Devine, Jim Botham, Shane Lewis-Hughes and Ioan Rhys Davies all going off, with Alun Lawrence having withdrawn before kick-off.

As a result Cardiff Blues A finished the game with three props, two hookers and three locks on the field, as Dragons A managed to score two excellent consolation try, through Will Talbot-Davies and the impressive Jared Rosser.

With the majority of the senior players in the matchday squad now flying out to Italy to join the first team, and Rhys Carre joining them, T Rhys Thomas and Richie Rees may well be forced to take a very inexperienced side out to Dublin to face Leinster A this coming weekend.

The team will be announced on Friday, with the game taking place at 14:00 on Saturday afternoon at Donnybrook, now known as Energia Park.