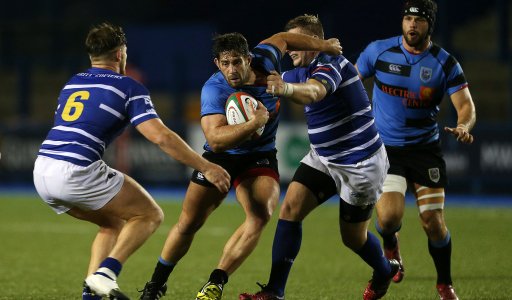 Cardiff RFC will play their final pre-season game of the summer against Welsh Championship side Tata Steel in Port Talbot on Saturday with a 14:30 kick-off.

After last week’s 42-8 victory over English side Old Albanian at the Arms Park, head coach Steve Law has taken the chance to rotate his starting XV, with eight changes to the side that will run out after making the short trip west down the M4.

There is a welcome return to the starting team for club captain Joey Tomlinson, after the hooker missed the majority of last season with a serious knee injury, and he is joined in the tight five by debutant Nathan Smith, with the lock appearing to have been playing for Maesteg Harlequins last season.

In the back row, Zach O’Driscoll this week is joined by Tom Daley on the blindside, and Morgan Allen at number eight, who made a try scoring appearance off the bench last week after playing for Cardiff Blues against Leicester Tigers the week before.

Behind them there is a Blue and Blacks debut for Wales international Martin Roberts, while a new centre partnership of Will Rees-Hole and Joe Gatt line up in front of Llywarch ap Myrddin at full-back.

Unfortunately Miles Normandale, Reuben Tucker and James Beal are yet to shake off their injuries, while Kieron Brown, Rory Pitman and Steffan Jones are unavailable for selection. Winger Morgan Griffiths will also not feature due to playing for Cardiff Blues A against Scarlets A at Cardiff Met.

The full line-up of replacements will be announced at the ground, but the rest of the available squad are likely to attend and be brought on for game time in the second half.

Steve Law will be hoping for a strong showing from his charges ahead of the Principality Premiership getting underway next week. Cardiff host reigning champions Merthyr at the Arms Park with a 14:30 kick-off.