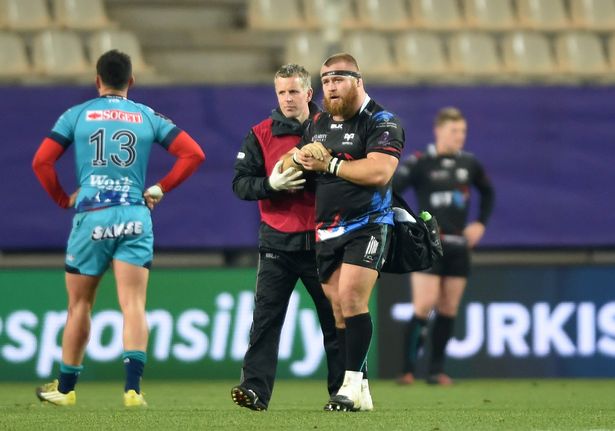 After too many long months of waiting Cardiff Blues finally announced on Monday evening that former Ospreys prop Dmitri Arhip is the first signing ahead of the 2018/19 season, and of the John Mulvihill era.

However, Since Simon Thomas broke the news that Dmitri Arhip would make the surprise switch to Cardiff Blues this summer, rumours have been abound about the reason that he did not head to Montpellier.

The Moldovan international had announced before Christmas that he would not be staying with the Ospreys after this summer, with a pre-contract agreement signed with the French Top14 club, who eventually finished runners-up to Castres last season.

However, out of nowhere it now appears that Georgian Levan Chilachava will anchor Montpellier’s scrum next year, after signing from Toulon, with Arhip running out at the Arms Park instead of the Altrad Stadium.

The reason, according to French newspaper Midi, is that the new Cardiff Blues player has what is deemed by Ligue Nationale de Rugby, who are the body that run professional club rugby in France, to have suffered a G3 injury, which prevents him from playing in the Top14.

Back in December 2016, Arhip suffered a dislocated right shoulder in a European Challenge Cup match against Grenoble. A fairly common injury in rugby union, but complications linked to the nervous system meant that the prop ended up missing around 10 months of action before returning to the field against Scarlets in October 2017.

The complications in that injury were serious enough for LNR to classify it as a G3 injury and prevent him from playing in the Top14 for any French club, causing Montpellier to renege on the pre-contract agreement signed months ago.

Therefore Arhip was technically unemployed, and with Ospreys already having replaced the Moldovan, Cardiff Blues jumped at the opportunity to pick up a player of his quality, with Taufa’ao Filise having retired and prospective signing, Australian Salesi Manu, not able to gain a UK visa.

So are the club taking a huge risk by signing Arhip with this G3 classification hanging over his head? The answer to that is probably not. Not as much of a risk as it has been made out as anyway.

An interesting case study to underline that is Juan Figallo, the Argentina prop playing for Saracens in the Gallagher Premiership, who was also given a G3 classification when he was playing for Montpellier back in 2014.

After five years playing for the French club, tighthead prop Figallo suffered a neck injury during a game, and was subsequently ruled unable to play in the Top14 again on the back of it. Montpellier released him from his contract, but instead of being forced to retire, the 24-cap international signed for Saracens.

Four years and 88 appearances later, the 30-year-old has just signed a new three year contract with the Gallagher Premiership champions, despite being classed as unable to play in the top domestic league just across the English Channel.

It’s also worth considering whether Cardiff Blues would be taking a risk on a player who has such a serious injury. Although some reports of his salary are exaggerated, Arhip comes in as one of the higher earners in the squad, and we would not be paying out top dollar for a player who could see their career ended any minute.

That isn’t to say that the prop doesn’t have some issue with his right shoulder though, there will always be a weakness of some sort in that part of his body after what was clearly a serious injury, but the medical team at the Arms Park have a track record of managing players well.

Nick Williams, Gethin Jenkins, Matthew Rees and Fa’ao Filise were all over the age of 35 last season, but each made it to double figures in starts, with Big Nick appearing 24 times in all competitions. Impressive after long and abrasive careers.

So don’t worry about ‘failed medicals’ and ‘career ending injuries’ with Dmitri Arhip. If we look after him right, Cardiff Blues will have pulled off a huge coup with the signing of the Moldovan monster.