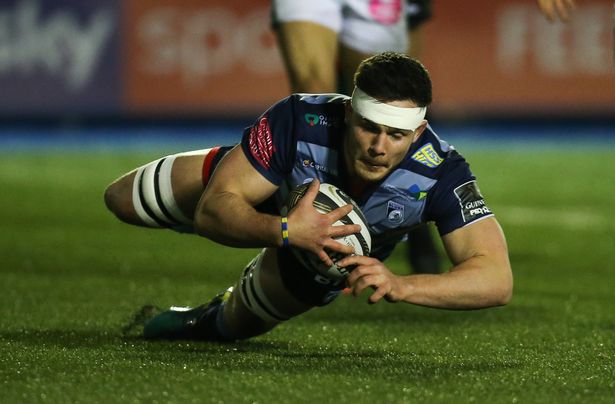 The 2017/18 season has been a memorable one for a number of reasons. The performances of some of the old guard amongst the Cardiff Blues squad, the emergence of a group of young players, and the European Challenge Cup run will no doubt live long in the memory.

However, if there is one reason that this season could keep cropping up in record books, it’ll be because it was the year that the world really sat up and took notice of Ellis Jenkins.

Now, rewind six months, and you’d be forgiven for almost forgetting about the 25-year-old former Wales U20 captain after he’d ripped his hamstring from the bone in pre-season. It cost him the first four months of his season, with Josh Navidi rising the ranks of Welsh flankers in his absence.

Since returning from that tough injury, which remarkably he still hasn’t fully recovered from, he has been in some seriously good form though, and if the name ‘Ellis Jenkins’ isn’t on your lips when discussing flankers for this summer’s Wales tour, then any argument you make is null and void.

He has played a crucial role in a run of Cardiff Blues form that has taken us from towards the bottom of Conference A in the Pro14 to within touching distance of the play-offs, and all the way through to our third European final. In fact, Ellis has started nine times this season, and we have won every single one of those games.

There’s no coincidence there. When you’ve got your best players on the pitch, you are far more likely to win matches, especially when that player balances out a back row superbly alongside Josh Navidi and Nick Williams. Most sides in Europe would fancy those three at the heart of their team.

So what makes Ellis Jenkins one of the star members of the Cardiff Blues squad, a shoe-in for this summer’s Wales tour and tipped as a future Wales and Lions captain? Well, quite simply, he is the ultimate all-round flanker.

We’ll get on to Ellis Jenkins defensive work later on, as well all know how good he is without the ball, but it’s his skillset with ball-in-hand that I want to highlight, mainly because that seems to be what Welsh rugby supporters go to when separating the likes of Justin Tipuric and James Davies from other flankers.

Not only has got Jenkins got a good set of hands on him, but he’s also a very intelligent rugby player, and that shines through in his general play, and his ability to cover other positions around the field.

There’s a reason why it was Ellis Jenkins, rather than one of the backs, that was asked to step in at scrum-half against Benetton back in March when both Tomos and Lloyd Williams were forced off through injuries.

Whereas the likes of Tipuric and Cubby are undoubtedly excellent runners, Ellis sees things that other rugby players in general, let alone flankers, just don’t see.

He is able to step in at scrum-half against Munster to allow Lloyd Williams to drift out into the backline and launch an attack down the blindside, as well as slotting in at first receiver himself and setting up a counter-attack by moving the ball wide to Josh Turnbull quickly.

The final clip is the most impressive though, as Jenkins calls the wrap around play from scrum-half and then has the awareness to pick out Garyn Smith on the screen pass rather than Macauley Cook who was coming under pressure from a Lyon spot blitzer.

Like all good opensides, he is handy in the wider channels too.

When Ellis isn’t stepping in at scrum-half, he’s playing inside centre like away at Stade Francais this season as, to match his rugby brain, he has a deft pair of hands that can create attacking opportunity for those outside him.

The offload in the final clip is particularly impressive when you consider he takes a hit to the head that results in a head injury assessment taking place.

His awareness of the game around him and ability to make plays in attack, like this piece of handling to score in Edinburgh, are rarely mentioned aspects of his game, just like his ability to carry for good yards.

When we look at Jenkins’ defensive work later, his strength will be evident, but it does him a service in attack too as the final clip shows in the leg drive off the back of the set piece. At least five metres he had no right to make there.

That power, coupled with the aforementioned rugby brain, then leads to clips one and two where he picks a perfect line off the shoulder of the first receiver to at least gain front foot ball and even make a line break.

So we’ve seen that Ellis Jenkins has the ability to both carry the ball and link play out wide, offering plenty with ball-in-hand, certainly not far off the talents of a Justin Tipuric or James Davies in that respect, but it’s without the ball that he comes into his own and where he will become a world class openside flanker.

Everything about his defensive work makes him an absolute menace around the field, but once again it’s all performed in a calculated manner.

Combining that rugby intelligence with the work rate required to be a top level openside, Ellis Jenkins covers every blade of plastic grass in an effort to do the basics of flanker play superbly.

Snaffling loose balls at the back of the lineout, leading kick chases in midfield and beating the offside trap in the defensive line, he’s not afraid to put his body on the line to spear the team’s defensive effort.

It’s at the breakdown that Ellis is most at home though, with two distinct types of turnover.

The first Ellis Jenkins turnover is as the tackle assist, spotting the opportunity to get over the isolated ball carrier before any support can arrive in the form a ruck clearout.

Aside from the ability to read when the turnover opportunity presents itself, the impressive aspect of this jackal is the speed with which Ellis can clearly show the referee a release of the ball carrier and then latch back on to the ball in an attempt to effect the turnover.

For a big man, he has incredible mobility to not just perform the jackal, but also to get into the strongest body position possible straight away and, like in the last clip against Cheetahs, withstand the weight of a tighthead attempting to shift him out of the way.

The second turnover type is the most dangerous element to Ellis Jenkins’ game, a trait he shares with the best Cardiff Blues opensides of recent years, Sam Warburton and Martyn Williams, and with the best opensides around the world, the likes of Richie McCaw and David Pocock.

Now, of course the days of 90s where the openside was the only jackal are over, but Ellis more than owns the role of fetcher. It is not a coincidence he just appears in the position of the three clips above, it’s yet another example of his ability to read the game.

That rugby intelligence can identify when a ball carrier is likely to be isolated even if, as in the first clip, it’s only a split second. Then it’s a return to the upper body strength and the mobility to get himself into the right body position to effect the turnover.

The final aspect to his game, and one that will serve him well as his career heads to new levels, is an ability to make big plays at big times.

With Pau a score down in the European Challenge Cup semi-final, on the attack and the clock red, Ellis secures his fourth turnover of the match and wins the game for Cardiff Blues.

In a selfish way, his career progression is a disappointment for Cardiff Blues fans, as there is no doubt he will appear at the Arms Park on fewer occasions, but we are a part of the development pathway, and it is certainly a source of immense pride that an academy graduate of our own is on his way to being one of the best players in the world.

Ellis Jenkins is a future Cardiff Blues club captain, Wales captain, and British and Irish Lion test cap. If you see any reference to ‘Simba’ on Twitter, it can only be Ellis Jenkins, the future Lion King.