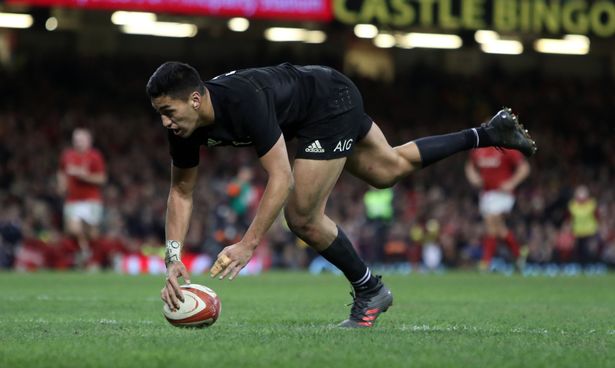 Wales’ wait for a victory over New Zealand extended to 64 years as a clinical All Blacks punished the Welsh for not taking their chances at the Principality Stadium on Saturday.

Warren Gatland had opted to recall much of the side that lost to Australia in the first game of the Autumn series, with just three changes from that team after an inexperienced outfit stumbled past Georgia last week.

Injuries to Jon Davies and Liam Williams were big losses, but New Zealand had players missing of their own as Brodie Retallick, Ardie Savea, Dane Coles, Jerome Kaino, Ben Smith and the talismanic Kieran Read were all missing off the teamsheet.

As the end of a long tour approached for the All Blacks there was whispering that perhaps they would not be at their very best, and after two high kicks from Wales were not dealt with comfortably it seemed the visitors were there to be tested.

This was confirmed when the first real try scoring chance of the game came courtesy of a New Zealand handling error in midfield. Dan Biggar hacked the ball forwards, but opposite number Beauden Barrett was able to recover and touch the ball down over his own try line.

Rhys Webb’s involvement in the game would end during the subsequent assault on the New Zealand line as he took a blow to the head, with Wales not able to smash through some resilient defending, instead settling for the boot of Leigh Halfpenny to open the scoring.

The home side continued to have the best of possession, but with their first real attack, the All Blacks taught Wales a lesson in adding a cutting edge.

First phase ball off a lineout on halfway saw the visitors attack with pace, and when Rieko Ioane broke Steff Evans’ tackle there was no stopping them. Aaron Smith provided the support on a tracking line before throwing a long pass out right for Waiake Naholo to acrobatically finish in the corner.

Wales continued to dominate possession despite going behind, but could not manufacture a line break as Hallam Amos was brought down well by Barrett as he threatened to run free, whilst Taulupe Faletau could not collect a Josh Navidi offload just short of the line.

Halfpenny missed a penalty as New Zealand crept offside, before Navidi finally manufactured a line break by breaking Codie Taylor’s tackle, but the quickly recycled ball was inexplicably fumbled by Amos as white line fever persisted in the Welsh ranks.

Finally the home side were back on the board though as a successful Halfpenny kick came when Steff Evans was obstructed chasing a chip over the top with the game opening up as half-time approached.

New Zealand slowly increased the tempo in attack, camping themselves on the Welsh try line, and a number of quickly taken tap penalties eventually came good as Naholo got his second try of the game by sneaking into another small gap in the corner.

As the clock ticked to red ahead of the break it seemed the All Blacks would hold the comfortable lead at half-time, only for Wales to produce their best moment of the match through a direct Amos line in midfield.

He cut through the visitors defence and found Dan Biggar on his left in support who held up the covering New Zealanders enough for Scott Williams to dive over on his 50th appearance for Wales. Halfpenny missed the conversion, but an 11-12 half-time score made for much better reading.

The start of the second half was fast and furious, with neither side particularly able to maintain possession, and seeing chances go begging as Sonny Bill Williams’ final offload went to ground, before Wales botched a lineout drive five metres out.

In the end it was a moment of somewhat good fortune that opened the second half scoring. As New Zealand hammered away at the Wales defence, Ioane made some yards down the left hand touchline before releasing a hand and attempting an offload which bounced perfectly into the grateful hands of Anton Lienert-Brown.

Barrett added the conversion, and a few minutes later there was more woe for Wales as a telegraphed attack allowed Ioane to intercept a Biggar pass, and a second conversion for the fly-half made it 11-26 with just over 15 minutes to go.

Wales tried to get back into the game, putting pressure on the New Zealand line, and Sam Whitelock took a yellow card as the visitors infringements racked up. From the resulting scrum Gareth Davies was able to dart over and give the hosts an outside chance at a comeback.

However, as soon as the hope was present, it was taken away by a clinical All Blacks. Despite being a man down they cut through the Wales defence from first phase ball, replacement scrum-half TJ Perenara on the wrap around and Owen Williams left massively exposed at outside centre with Ioane ghosting through a large gap for his second try.

The home side toiled for the final five minutes, but they only served to sum up the game as the Welsh dominated possession but could not manufacture any sort of line break, and eventually Rhys Priestland over hit a cross kick to end the game.

A particularly disappointing performance given that New Zealand were not close to the level of play we have come to expect from them, with a high number of handling errors and turnovers conceded offering Wales more than enough chances to dominate the game.

For Wales the big concern will be the distinct lack of cutting edge, having had the majority of possession, but making very little headway in terms of metres or clean breaks. ‘Changing styles of play’ is a valid concern, but the players we have should be used to playing in a similar style to that which the national team are trying to adopt.

It would appear they are starting from a lower base than required, and that comes back to the coaching. The players are seemingly not able to express themselves, with Hallam Amos’ break for the first try an exceptional play, rather than one that should become the norm.

Rob Howley is the man at fault there, while Robin McBryde needs to be taking responsibility for a woeful set piece showing, especially at the lineout and maul where there were some pieces of play amateur players would be embarrassed by.

Overall it just wasn’t good enough on the day. Warren Gatland now has three wins in the last 30 games against the ‘big three’ Southern hemisphere sides. When put like that there should be real pressure coming onto him and staff. In reality however, we know there won’t be.