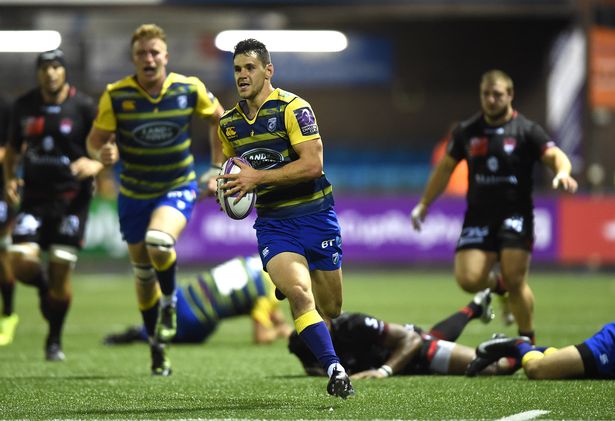 Round two of the 2017/18 European Challenge Cup pool stages sees Cardiff Blues travel out to the Stade Ernest-Wallon for a game against Top14’s third-placed side Toulouse.

After last week’s bonus-point win over Lyon at the Arms Park, Danny Wilson’s men are sitting pretty at the top of pool two, but are well aware of the difficulties that heading out to Toulouse will present with them still being a formidable force despite playing in the second tier competition.

Of course this fixture has some serious history in the Champions Cup, or Heineken Cup as it was, with Cardiff v Toulouse being a clash of the European titans over the years.

Back to 1996 and the first ever Heineken Cup Final saw the first meeting of the two teams, with six penalties from the boot of Adrian Davies not enough to match Toulouse after extra-time at the Arms Park.

Since then we have met eight occasions, with seven of those coming in European rugby’s premier competition. The record does not make good reading for away sides, with each game being a home win resulting in a record of three Cardiff wins versus five Toulouse victories.

The back-to-back quarter-finals stand out as memorable in recent years, with Toulouse coming out on top on 2008 with a 41-17 scoreline, before Cardiff Blues got revenge the next year with a 9-6 win at the Millennium Stadium.

Since then both sides have followed similar paths to where they find themselves now. While Cardiff Blues were winning the Amlin Cup in 2010, Toulouse were lifting the main Heineken Cup trophy, however a fall quickly followed for us to the point where we’ve failed to qualify for the Champions Cup for three years straight.

Toulouse meanwhile made the Heineken Cup semi-final in 2011 and won the French Cup in 2011 and 2012, before starting a more gradual decline that has resulted in them failing to get out of the Champions Cup pool stage in two of the last three competitions, and finishing 12th in last season’s Top14, one place above the relegation zone.

That means they have now qualified directly for the Challenge Cup for the first time in their history, but they have managed to bounce back so far this campaign from the disappointment of last year, sitting third in the Top14.

Just the one loss, resulting in a losing bonus point at Toulon, has been balanced out with some heavy home wins, with the Stade Francais result a standout thanks to a 53-17 scoreline.

The French side have made seven changes to the starting XV that drew 20-20 with Sale last week, welcoming back Dorian Aldegheri and Leonardo Ghiraldini to the front row, with Rodrigue Neti joining them from the bench.

59-cap French international Yoann Maestri returns to the second row while Gillian Galan starts at number eight. In the backs rising star scrum-half Antoine Dupont starts, while Gael Fickou is selected at centre as Toulouse recall a number of players who beat Clermont in the last Top14 game before the European break.

Danny Wilson has also opted to make changes to the Cardiff Blues side that secured the bonus-point win over Lyon last week, with six new faces all coming into the forward pack.

Kris Dacey and Fa’ao Filise join Corey Domachowski in the front row, James Down and Damian Welch form a new partnership at lock, while Josh Navidi and Nick Williams return to the back row after being rested last weekend.

Ethan Lewis comes onto the bench after featuring in the British and Irish Cup last week, while Dillon Lewis, Seb Davies and Olly Robinson step down from the starting XV. Willis Halaholo is recalled to the matchday squad amongst the replacements, while Lloyd Williams will make his 150th Cardiff Blues appearance if he is called on.

Despite a stereotype of French sides not taking the second tier Challenge Cup seriously, Toulouse have named a fairly strong squad, including a number of Pro14 regulars, making the trip to the Stade Ernest-Wallon even more daunting than it already was.

In reality any sort of losing or try bonus-point would be a good result to come home with here, which would keep us in touch with Friday’s opponents as well as the winners of Lyon v Sale in the other pool game.

There will be battles all over the field we need to be competitive in if we want to get a result though, especially up front where the tight five will need to pull together as a unit to face players like Ghiraldini, Maestri and Faasalele. A really physical encounter is to be expected in that department.

Tomos Williams v Antoine Dupont will be an intriguing head-to-head of the young scrum-halves, while last week’s MOTM Garyn Smith faces the task of trying to contain Gael Fickou. Rey Lee-Lo needs to ensure he doesn’t get dragged into that battle and leave the outside channels exposed.

Blaine Scully will also need to be defensively aware to cope with opposite winger Wandile Mjekevu as well as covering Matthew Morgan under any high kicks and from line breaks, with the diminutive full-back at risk of being exposed by some of the powerful men in Toulouse’s team.

It will take an 80-minute performance to match the likes of Toulouse, but if we can be brave and play our expansive attacking game when we get possession, and unlike in the first half against Lyon, make our chances count, then there’s a possibility of some points to fly home with.

Safe journey to any travelling Cardiff Blues fans, and fingers crossed we have some momentum to take down the M4 to Llanelli next weekend, come on Cardiff!!

Tom Foley (ENG) – Originally from South Wales, Foley has been an Aviva Premiership referee since 2011, officiating eight games in Europe during that time. Has only ever refereed Cardiff Blues once before though, in a Anglo-Welsh Cup 42-45 win over Wasps at the Ricoh Arena in 2015.