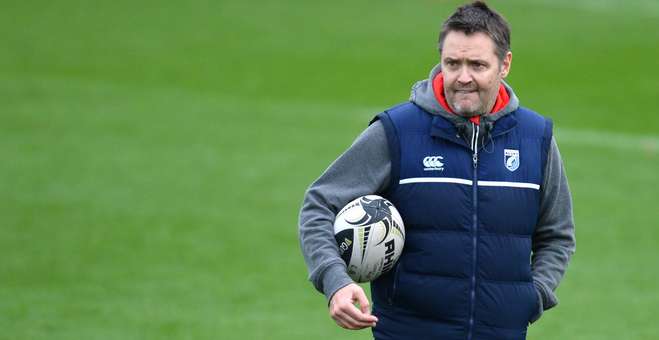 Cardiff Blues announced this week that General Manager Billy Millard will depart the club at the end of the season and return to Ireland for family reasons.

Australian Millard was in his second stint at the Arms Park, having been backs coach during the Anglo-Welsh and European Challenge Cup winning days of 2008-2010, before moving on to have spells with Melbourne Rebels, Australia 7s and USA Rugby.

He re-joined the Cardiff setup in 2014 as ‘Head of Elite Performance’ alongside then Director of Rugby Mark Hammett, before switching job titles to ‘General Manager’ as Danny Wilson arrived as Head Coach the next summer.

The job brief remained the same though, with Millard taking the lead on player recruitment, release and retention, controlling the budgets within the rugby department and representing the club at all relevant WRU meetings.

His departure will leave a big hole in the rugby management staff, and at a time when there were already questions being asked of the coaching setup, it leaves the senior management at a crossroads in terms of where to go next.

Chief Executive Richard Holland has confirmed that the club are looking to replace Millard sooner rather than later, but in what role the new person comes into the club remains unconfirmed.

There is no suggestion that Danny Wilson’s job is at risk, and any calls for his departure are few and far between despite a disappointing season, but there is a general consensus that we need additions to the coaching staff to assist Wilson.

As things stand there are only two coaches contracted full-time with the senior team next season under Wilson, namely defence coach Graham Steadman and attack coach Matt Sherratt. Academy boss Richard Hodges steps up to lend his defence coaching when possible, while Wilson combines the Head Coach role with being forwards coach, but it’s not ideal.

In comparison, our neighbours to the West, the Ospreys, have Steve Tandy in at Head Coach as well as full-time attack, defence and forwards coaches, and a number of skills coaches.

With money perennially tight in Welsh club rugby it’s difficult to know actually how much the budget for coaches is at Cardiff, but in an ideal world there would be at least two additions to the coaching staff ahead of next season in my opinion.

A coach to assist in the skills/attack/backs department would add an extra dimension to our play, which isn’t struggling under Sherratt’s tutelage by any degree, but occasionally lacks a depth to it that can break down the better defences. Particularly the skills department can be found lacking at crucial times, an area to be addressed going forward.

Up front we also fall short on occasion, which may seem surprising to some considering the pedigree of Danny Wilson as a forwards coach, but given the fact he’s combining that role with head coach it’s not a shock to discover that the pack has been found wanting at both the set piece and in open play at points this season.

On that front there is two choices really, and this is the clincher to how Billy Millard will be replaced. The first option is to bring in a full-time forwards coach who takes over the responsibilities that Danny Wilson has in that department, allowing Wilson to become a Head Coach in terms of overseeing the entire team and focusing on player retention and recruitment.

The second, and my preferred option, is to recruit a Director of Rugby above Danny Wilson. This would be someone who has all of Billy Millard’s responsibilities as General Manager, but also has a hands on role in the coaching side to as an overseer. Subsequently Danny Wilson could spend more time with the forwards as well as being head coach.

What we have to remember is that Wilson is in his first job as the top man in a professional environment. There’s no doubt he’s an impressive coach and in the media, but we are throwing him further and further into the deep end. He needs a support system around him, and an experienced DoR might be just the answer.

In many respects sorting out the coaching staff is actually more important now than recruiting players. The core of our squad is definitely there, and in the absence of a big bank balance it comes down to a talented batch of youngsters to provide squad depth, something they can only do with coaches good enough to help them realise their potential.

Of course the lack of money in Welsh rugby doesn’t just mean not being able to attract strength in depth, but also big name coaches, although Cardiff showed with the appointment of Mark Hammett in 2014 that Super Rugby coaches can be attracted for rugby reasons without being paid the top wages seen in England and France.

If that can be repeated then the completion of the coaching staff could be the final piece in Danny Wilson’s three-year jigsaw. Results and performances in recent weeks have shown what this squad can achieve, and something as simple as an off-field addition could be the clincher in terms of producing that consistently.

Whatever happens I have the utmost faith in what Danny Wilson is trying to achieve. He’s an excellent young coach and is taking the club in the right direction, despite being dealt poor hands in terms of league scheduling and injuries. If he can get that help in, who knows what next season could hold for Cardiff Blues!