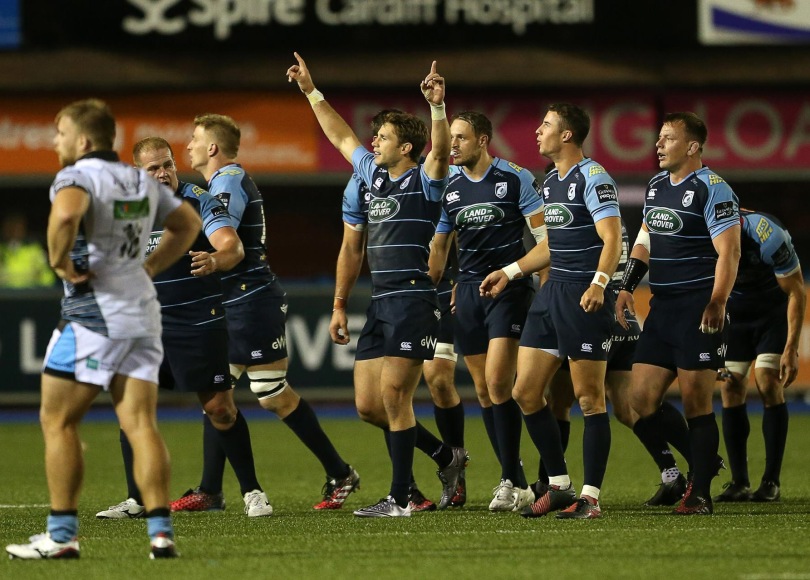 Cardiff Blues added to their record breaking start to the 2016/17 Guinness Pro12 season with a 21-23 away at Zebre on Saturday thanks to tries from back three trio Blaine Scully, Matthew Morgan and Tom James.

In a scrappy encounter at Parma’s Stadio Sergio Lanfranchi Danny Wilson’s men came out on top of both Zebre, who provided stern competition as the Italian sides always do on their home patch, and referee David Wilkinson, who produced four yellow cards and stunted any chance of a free-flowing game with a whole host of penalties.

So what made a two-point win over a side that counts 11th as it’s best ever finish so excellent? The ability of the Cardiff Blues to win ugly.

Too many times over the last five or six seasons have the team been pipped to the post by single figures, especially away from home. Take last season for example, we lost away to Connacht and Glasgow by five points, Montpellier by one point, Ulster, Treviso, Ospreys by seven points, and Harlequins, Leinster and Munster by eight points.

All games where we came so close yet so far. Even to turn two of those games against Pro12 opposition into wins would have sent us into the top six and Champions Cup qualification, while a win against either Quins or Montpellier away would have been enough to reach last season’s Challenge Cup knockout stages.

On Saturday in Northern Italy it was a case of putting demons to one side. Cardiff had lost two of the last three visits to Zebre, with especially last season’s 26-15 loss being a tough one to take, making it five losses on the bounce and underlining just how much work there was for then new Head Coach Wilson to do.

He criticised the attitude of the team that day, and underlined again in the weekend leading up to the game just gone how important a mindset is ahead of a game like Zebre away.

“Last year we didn’t go there with the right mind-set and attitude but I’m hoping that won’t be the case this year. We have talked about that a lot leading into this game. This is a real test to see where we are mentally.”

If you ever wanted an indication of how seriously Wilson takes the psychological side of the game then this last 10 days has been it. From the euphoria of a huge home win against Glasgow to the hard work of a week’s training before an Italian job. Three weeks doesn’t make a season, there was a long way to go.

At times it seemed like Cardiff were destined for another close away defeat, and another loss on Italian soil. Two golden opportunities to secure a try bonus point and put the game to bed went begging, while in defence it seemed like Zebre were getting to the redzone every time they had possession.

Yet like on the road in Munster two weeks ago, we had the final say and saw the game out for another crucial four points. That day in Ireland it was Sam Warburton with the big turnover before the game was seen out with ball in hand, while on Saturday Macauley Cook disrupted the a defensive lineout, allowing possession to be secured and the match managed once again for Steven Shingler to smash the ball into the Parma sunset.

At times Zebre were well on top in the game and heads might have previously gone down. However there’s a quiet determination and fight about this squad. There’s no rolling over and going down with a whimper, it’s all about getting the result and adding to the momentum each week. The winning mentality is forming after a long time of being away.

When the final whistle went in Parma there was a quiet satisfaction to Wilson’s comments. “The boys summed it up in the changing room. Our leaders spoke and said we’ve come away with a win which was the important thing but it was not as good a performance as we have come to expect.”

Of course you have to acknowledge the performance wasn’t up to the standard seen so far this season, and as such there were no open celebrations, nothing euphoric in the media, and no tweets of any sort after the game, except to congratulate Kris Dacey on 100 appearances.

However, a win is a win at the end of the day, and I’m sure there would have been a positive atmosphere on the plane home that night. Second in the league only on points difference behind Ulster, 10 more points in the bag than at this stage a year ago and only one away win from matching last season’s tally.

There’s no getting away from the fact that the tough games keep coming with Leinster being welcomed to the Arms Park next weekend before a trip down the M4 to take on the Ospreys ahead of the first two European pool games, but you get the sense that this group of players are up for any challenge.

I’ll leave the last word to Danny Wilson to sum up the season so far….”We’re four out of four going into a home game and if you had offered me that at the start of the season I would have bitten your hand off.” Come on Cardiff!!